Mark your iCal, everybody: The next iPad is almost certainly going to be announced on March 7.

According to a tweet by the New York Times' Nick Bilton, Apple on Tuesday morning sent out invitations to a special event.

The invites sport a high-res photo of an iPad and the note: "Please join Apple on March 7 for a special event."

The event itself will take place at the Yerba Buena Center for the Arts in San Francisco at 10 a.m. PST (1 p.m. EST).

Check out the invite (below), courtesy of The Verge: 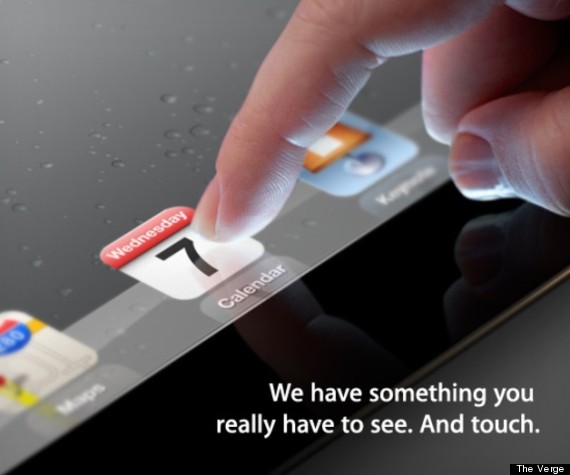 The next iPad -- which the New York Times has noted will not necessarily be called the iPad 3 -- is expected to upgrade the iPad 2 internally, rather than radically changing its design; in October, Apple offered a similar update to its iPhone, boosting the power of its signature smartphone's processor and antenna and adding voice assistant Siri without significantly transforming the case or body of the phone.

What will change? Apple has been typically tight-lipped in the run-up to its iPad unveiling. Based on rumors and supposed leaks from the supply chain, however, the biggest change is expected to be the iPad's screen. The iPad 3 could feature a Retina display, which Apple defines as a "pixel density is so high your eye is unable to distinguish individual pixels." The iPhone and iPod Touch have Retina displays, and the iPad is expected to join those two with this upgrade, doubling the resolution and quadrupling the amount of pixels on the iPad from 1,024x768 to 2,048x1,536. (The Apple blog MacRumors claims to have a prototype of an iPad 3 display, which they confirmed was indeed 2048x1536).

The Wall Street Journal also reported that the next iPad is set to be compatible with the faster 4G networks of AT&T and Verizon, which would mark Apple's first 4G device; a quad-core processor, Siri and improved camera are also rumored add-ons. The iPad 3 is also rumored to be receiving a larger battery, which, in addition to the Retina display, could bump up width of the iPad 3 about one or two millimeters.

We'll know for sure on March 7, when Apple execs take the stage in San Francisco. The Huffington Post will of course keep you updated with all the latest.

Take a look through the slideshow (below) to see 11 gorgeous (absolutely unofficial) iPad 3 concept designs.

IPad 3 Invite? Apple Announces March 7 Event
iPad 3 Concepts
1 / 11
<a href="https://www.facebook.com/aatmastudio" target="_hplink">Aatma Studio</a> posted this amazing <a href="http://www.youtube.com/watch?feature=player_embedded&v=9s2oYUy_cVY" target="_hplink">iPad 3 concept video</a> on its <a href="http://www.youtube.com/user/AatmaStudio/videos" target="_hplink">YouTube channel</a> on February 28. The 3D animation and digital content studio presents a stunning iPad 3 design with an edge-to-edge display, holographic display capabilities, and the ability to connect magnetically and wirelessly to other iPad 3 devices.