So far, it seems people haven't been wowed by the iPad.

First came the name-bashing (iMaxipad, iTampon, and so on) and just hours after its unveiling, 'iPad a disappointment' became a trending topic on Google search (see screenshot below).

It has yet to be determined whether the iPad will tank or fail, but to put the criticism in perspective, take a look at how Apple fanboys bashed the now-indispensable iPod when it first launched in 2001.

EliteMacor: iPoop... iCry. I was so hoping for something more.

Pants: Sounds very revolutionary to me. :( hey - heres an idea Apple - rather than enter the world of gimmicks and toys, why dont you spend a little more time sorting out your pathetically expensive and crap server line up? :( or are you really aiming to become a glorified consumer gimmicks firm? :(

Nobody Special: No F-ing way: All that hype for an MP3 player? Break-thru digital device? The Reality Distiortion Field™ is starting to warp Steve's mind if he thinks for one second that this thing is gonna take off.

The New York TImes' David Pogue argues the criticism is just part of the Apple acceptance process (first comes the hype, then the bashing, then the love).

TweetFeel has put together a 'breakdown of the backlash' against the iPad, analyzing nearly half a million Tweets to understand what aspects of the iPad people have been criticizing. Check out their chart in the screenshot below: 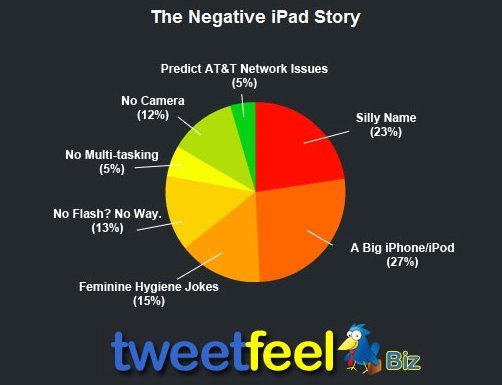 So what are your initial impressions of the iPad? Tell us in the comments section below!

Get the scoop on the iPad: reviews, 13 things you need to know about the iPad, and the 9 worst thing about the new Apple tablet.