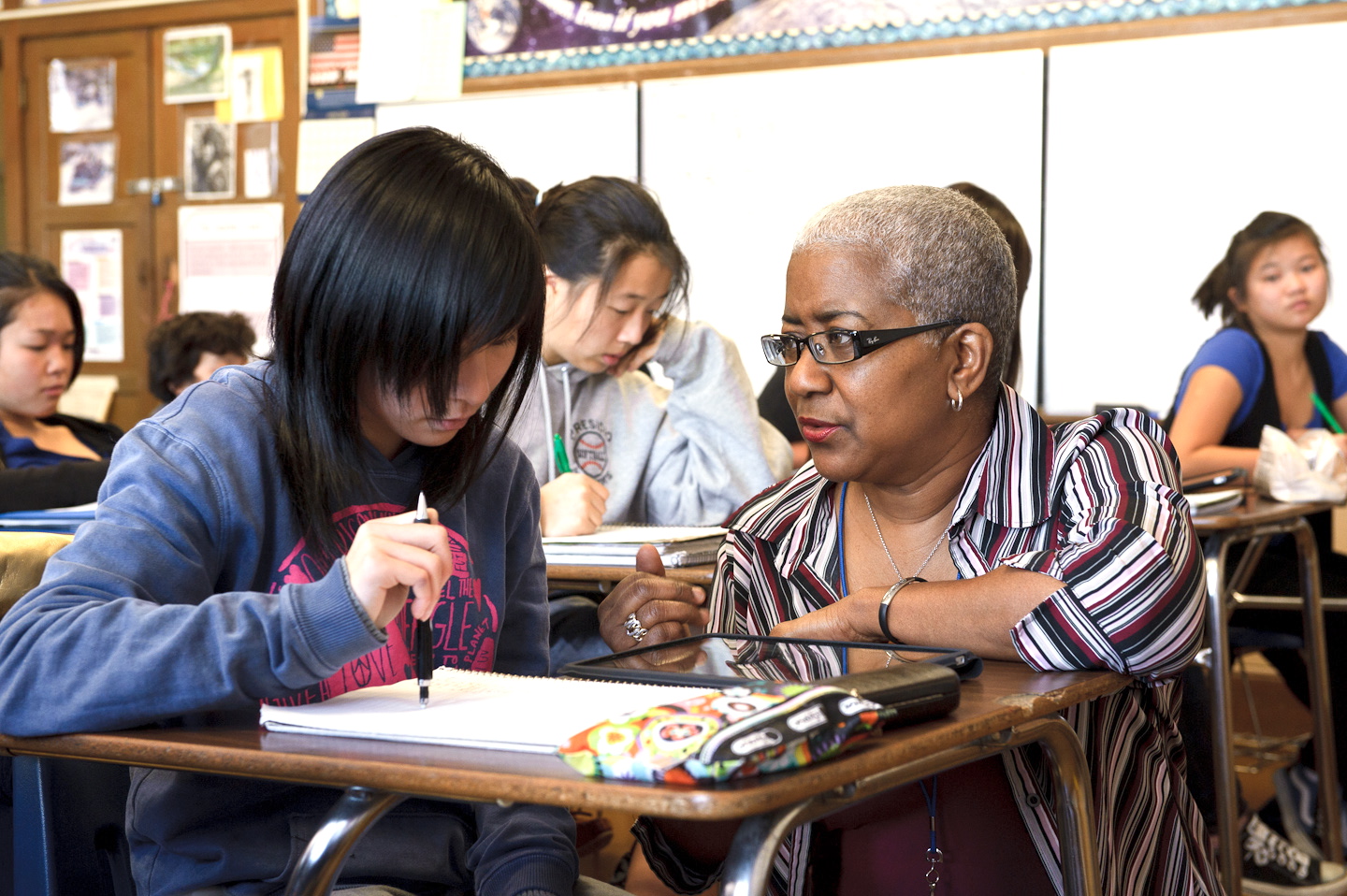 Halfway through a year-long pilot study using iPads instead of textbooks, a San Francisco eighth grade algebra class is showing signs of every teacher's dream: the spark of engagement in her students' eyes.

Jeannetta Mitchell, a veteran teacher with 20 years of experience, is encouraged by what she sees so far. "This is not a magic wand," she says. "This just makes it more fun for them to learn. Nobody's just sitting there writing down the answer, saying 'I don't know how I got there.' They know how they got there."

During my visit to her class last Friday, it was apparent that she was a big part of the reason they understood those problems. Mitchell walked up and down the aisles of the class for the entire duration of the period, asking questions, offering explanations and giving one-on-one help when it was needed.

The students never had a chance to tune her out. They were constantly being asked to participate one way or another, whether it was working out problems on the whiteboard (not interactive), watching instructional videos on the iPad or working in groups.

If the goal of learning is to figure out the "how" and not just the correct answer, then the gadget is doing its job.

The class at Presidio Middle School is part of a study involving 1,000 California students where 400 are learning algebra with iPads. The pilot program for the iPad algebra application was developed by Houghton Mifflin Harcourt, a textbook publisher, and follows the traditional textbook page by page.

But one of the differences between the book and the app is that students can watch videos of instructors explaining each problem as many times as they need in order to understand. 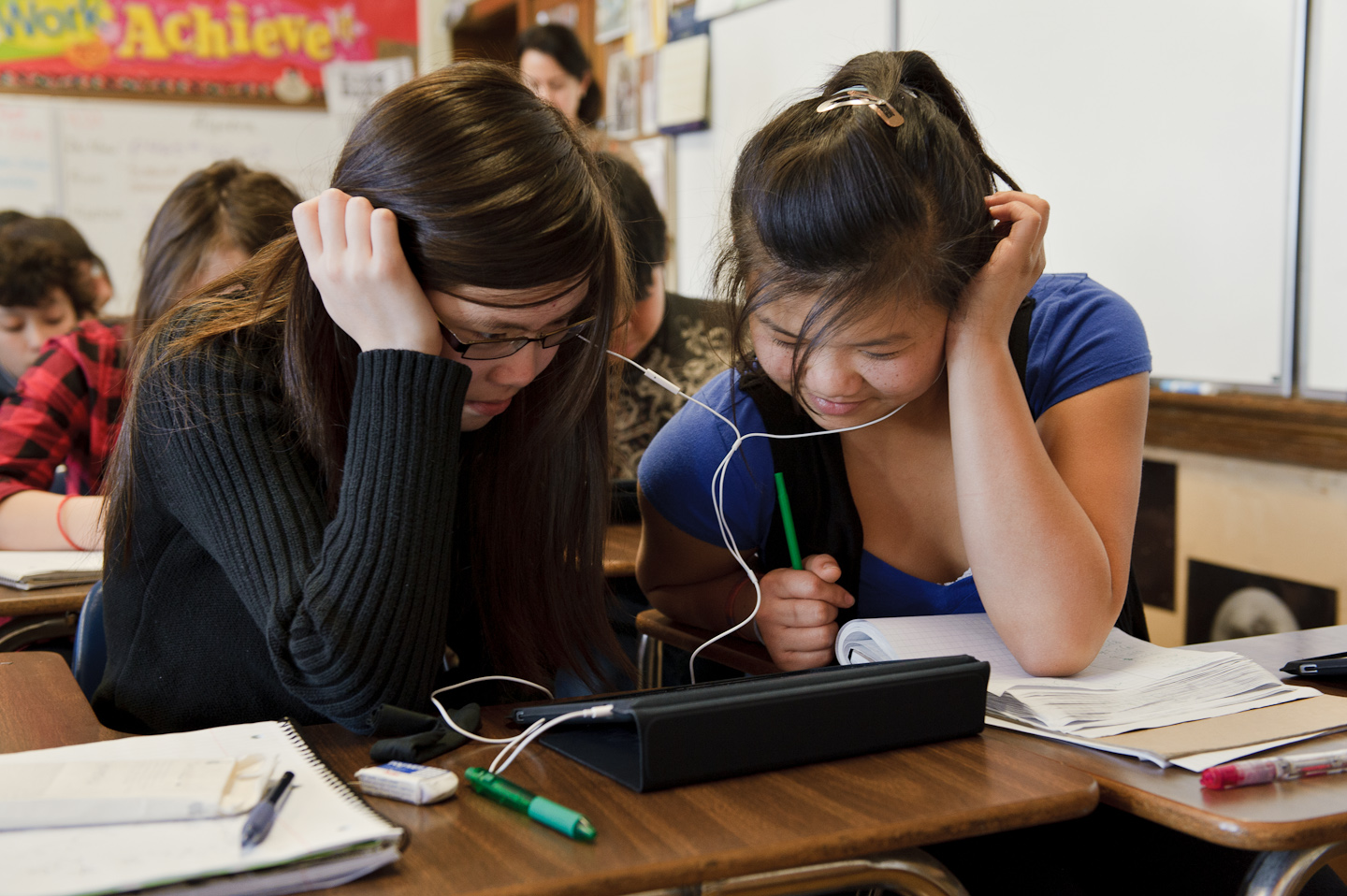 "That's one of the best things about the iPad as opposed to the book," Mitchell says. "It shows how to solve. The textbook just has answers in the back, no explanations as to how to get there."

"Students don't really look at it as it's solving the problem for them," Mitchell adds. "They really want to understand. Kids really do want to learn and this just makes it more fun for them to learn."

Mitchell admits that when the pilot first launched, test scores for the class using the iPad were actually lower than those using the traditional textbook.

"I had a conversation with the class explaining to them that the iPad was not the panacea of all ills. It wasn't going to do everything for them, that they still had to think," Mitchell says. "You have to be engaged. It's not giving you the answers; it's helping you get the answers."

Each class in the pilot program is figuring out its own way of getting the best out of the iPad and, in Mitchell's case, the videos have been key.

"I've used the videos in class a lot more and I've noticed that the grades have gotten a lot better since I told them to use what's available," Mitchell says. "You cannot convince any school, any district to use this device if you're not utilizing all the capabilities it has for you."

So have the grades improved?

Yes, there's no discrepancy between the class using the iPad and their textbook-using counterparts. Her hope, though, is that the iPad class scores will surpass the print book class scores. "One of the things about the iPad," Mitchell says, "it's a great tool but it's like anything, if you don't use the tool you're not going to get anything accomplished."

But even more importantly than scores, Mitchell has noticed that some students who'd showed no interest in math in the past are hooked. "I have students who are participating in this class who did not participate in their previous math classes, so it does engage them," she says. "Is it going to make them all brainiacs and straight-A students? No, it's not going to do that. But it will keep them engaged."

WHAT DO STUDENTS THINK?

"Sometimes I don't understand the step by step the teacher gives me, but I watch the videos over and over again and I can get it when I need the help."

"With video, it's a lot faster. You can access videos a lot faster than going on the Web and signing into accounts. And sometimes (the videos) say something extra, so I'd learn something more than just the textbook."

"With a book, (if I got stuck on a problem) I would just skip it and wait to figure out what's happening in class for (the teacher) to explain. But now I can go back and look at examples. It's actually more fun than a book."

AND WHAT ABOUT THE TEACHER?

For those who fear that teachers will be left out of the equation, Mitchell firmly maintains that will not be the case. At least not at this point.

"Anyone who thinks that the iPad or online textbook is going to replace them, they don't have to worry about that," Mitchell says. "Only the classroom teacher can see the disconnect, the child that has the question but isn't asking. You have to be involved. I as a teacher cannot sit down while I'm teaching. You have to move around and keep students engaged. There's no doubt in my mind that if I left the room they would not be testing as well as they are. They need a teacher."

To read more about how the iPad is being used in the classroom, including slideshows, videos, Q&As and more, go to MindShift.