I have three flat touch devices on my desk right now. All three pretty much do the same thing. I feel having three of these things should be an extravagance but it's not. All three have a different size and weight and it's this form factor that determines which one I take with me and what I do with it. 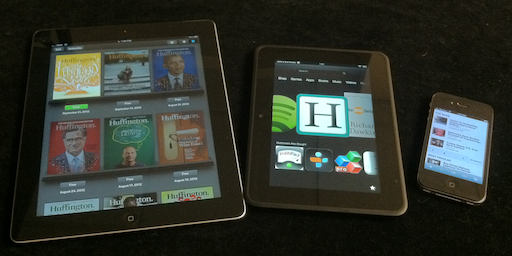 The smallest device, or micro iPad, is an iPhone 4S (no, I didn't upgrade; I'm rather stoic when it comes to replacing Apple gear). People like to call it a smart phone, but it's really a poor phone. I swear my old Blackberry from five years ago dropped calls with less frequency and connected calls more quickly. Strip away the phone app and the iPhone is a highly portable iPad, great for situations where I can't sit down. While standing in line waiting to get somewhere the iPhone lets me check my email, consult my calendar, or read a book single handedly. I hold the iPhone in my right hand and poke it with my thumb. I wish more designers understood that using an iPhone with two hands and two thumbs is inconvenient. I believe this is why the iPhone 5 is longer and lighter: Easier to hold in one hand and still easy to operate with one thumb.

The medium device on my desk, or mini iPad, is a Kindle Fire HD. I wanted an Android device, because I'm nerdy like that, and I already have two iOS devices. Honestly, how much money does Apple need from me? I think it's ok to share my consumerism with Amazon as well. I also like the idea of Amazon Prime and subscription services for media. I don't want to own all the books, movies, and music I consume. Renting is cheaper than downloading, but as an avid consumer of the worlds back catalog a subscription service to all the world's old stuff is just fine for me and even cheaper.

While the Kindle Fire HD's Android user interface is more confusing than Apple's standard iOS, it is still very usable. The size and weight of the Kindle Fire HD is great for traveling in coach. I travel a lot and I don't travel first or even business class, and I don't go to exotic places or romantic journeys. I travel for work and I'm always sitting in the unglamorous part of the plane or the train. I never have enough leg room in my seat or free space in my carry on luggage. The 7" Kindle Fire HD is just big enough to let me read books or watch movies without taxing my middle aged eyes. It's just small enough that when the guy in the row in front of me leans back I do not fear that my LCD screen will be crushed by his seat back. The only drawback is the lack of 4G LTE wireless service. However, the trains and planes mostly provide WiFi these days. I figure that in the long run, we'll all be bathed in the invisible glow of hundreds of millions of community WiFi access points so not every device I own doesn't need to have a mobile phone built into it.

The largest device, or maxi iPad, is a new iPad. (I still can't believe it's not called the iPad 3 or iPad XL, or iPad Pro.) Over the months that I've gotten acquainted with my new iPad, it has gradually replaced my laptop. I take it to meetings for serious note taking and email responding. I use it to do light work-related reading and web research. I carry my new iPad around like some people carry those little toy dogs around in handbags. It's my perky, slightly awkward companion. My new iPad and I are figuring out how to work well together and during the process my laptop has become more stationary. The only thing that laptops are good for any more are serious typing sessions, creating serious presentations, and writing software or administrating servers.

I even buy my new iPad little toys, like a jot stylus and a Logitech keyboard. Using a sylus and keyboard defeat the whole purpose of a touch device like the iPad but I see these toys as crutches that help an old guy like me adjust to a brave new world of naked finger work.

Now, I have no idea what Apple is going to release on October 23rd at their mystery event. Maybe it will be an iPad mini. What I would really like is a touch device that plays all three roles that the micro, mini, and maxi form factors do in my life. I have much better things to think about than which pad to bring to work or a party.

So here is my suggestion: The Dumb iPad!

Personally I don't want yet another iPad. I want something dumber and yet more smart. If Apple does release an iPad Mini (The Newest iPad?) we'll back to the world of too many similar choices that Steve Jobs worked so hard to destroy.
Download
Calling all HuffPost superfans!
Sign up for membership to become a founding member and help shape HuffPost's next chapter
Join HuffPost