SAN FRANCISCO, Oct 23 (Reuters) - Apple marketing wizard Phil Schiller defended the $329 price of the new iPad mini tablet, saying consumers will be willing to pay for quality not found in less expensive devices from rivals like Google and Amazon.

With competition growing from tablets that are smaller and less expensive than Apple's wildly popular iPads, Apple Chief Executive Tim Cook and Schiller on Tuesday took the wraps off the new 7.9-inch tablet, which essentially has most of the functions and features of the full-size iPad but in a smaller package.

While the news of the launch was welcomed by Wall Street, many analysts were concerned that the steeper-than-expected price might turn away some cost conscious consumers.

Google's Nexus 7 and Amazon's Kindle Fire HD tablets are both priced starting at $199. While the iPad mini is significantly more expensive, it is also lighter, thinner and provides more screen space than rival offerings.

Asked by Reuters whether the iPad mini's price could make it too expensive for some cost-conscious shoppers who have been attracted to the Nexus 7 and Kindle Fire, Schiller said he believes consumers will see Apple's smaller tablet as a premium product worth paying for.

"The iPad is far and away the most successful product in its category. The most affordable product we've made so far was $399 and people were choosing that over those devices," Schiller said.

"And now you can get a device that's even more affordable at $329 in this great new form, and I think a lot of customers are going to be very excited about that," Schiller said.

Amazon made inroads into the realm of 7-inch tablets last year with the launch of its Kindle Fire and has said its latest Kindle Fire HD is the best-selling product on the company's website since the device went on sale more than a month ago.

The Internet retailer is believed to sell the product close to its cost, but the Fire HD is part of Amazon's strategy to attract mobile customers to its website.

Internet advertiser Google is similarly believed to sell its Nexus 7, manufactured by Asustek, near cost.

Apple is under pressure to defend its dominant position in tablets, a market it created with the launch of the first iPad in 2010. The intensity in the marketplace was evident in Tuesday's unveiling of the iPad mini as Schiller took the unusual step of doing a side-by-side comparison of the smaller iPad and Google's Nexus 7 tablet.

"Others have tried to make tablets smaller than the iPad and they've failed miserably," Schiller said during the event. "These are not great experiences."

The launch of the iPad mini, at the California Theater in San Jose, was mostly a Schiller show with the veteran Apple executive responsible for all of its marketing and advertising strategy introducing all of the new products, including a fourth generation 10-inch iPad, a 13-inch Macbook Pro with a so-called retina screen and a new iMac.

Analysts have worried that challenging the likes of Amazon in smaller and less expensive tablets could hurt Apple's prized profit margins. Apple's gross margin on the full-sized iPad is between 23 percent and 32 percent for US sales.

Despite concerns that the high price tag may curb demand, analysts were still bullish of the company, which will releases its fiscal fourth-quarter results on Thursday.

"In spite of concerns about the price we would be buyers of the stock even in front of earnings this Thursday as we do believe that customers will pay a premium for an Apple tablet," said Shebly Seyrafi, an analyst at FBN Securities. 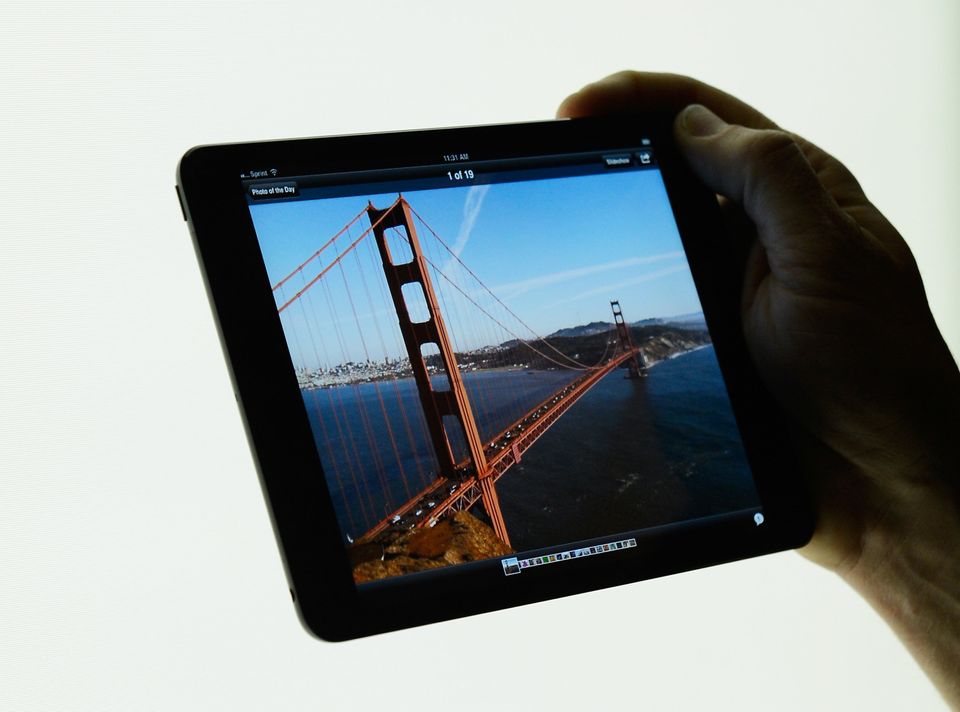 1 / 54
Apple Introduces A New iPad
SAN JOSE, CA - OCTOBER 23: The new iPad mini is displayed after its unveiling at the Apple special event at the historic California Theater on October 23, 2012 in San Jose, California. The iPad mini is Apple's smaller 7.9 inch version of the iPad tablet. (Photo by Kevork Djansezian/Getty Images)
Getty Images