I never thought my 89 year old grandmother would teach me something about technology. Then again, her tenacity has never failed to astound me.

It all began with the iPad 2 my family recently gave my grandmother (or Oma, in German) for her birthday. It was a surprise present: Oma had never before owned a cell phone or a computer, and before holding the device in her hands had been unaware even of the iPad's existence. My sister had been able to buy an iPad 2 at SXSW Interactive, so because of the later release date in Germany, Oma was likely one of the first people in the country to own one. We all thought this was pretty cool and ahead of the curve. Oma's initial reaction, on the other hand, can only be described as thankful bewilderment, mixed with a hint of sheer terror. 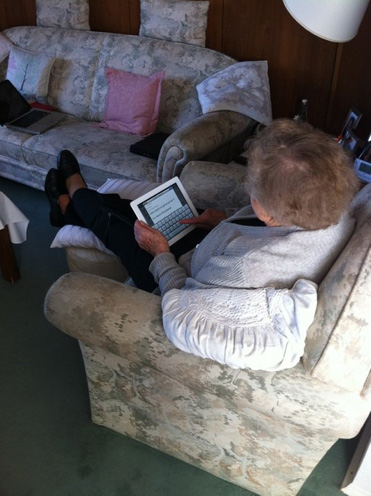 Discovering social technology at an age where you may no longer even be driving a car would be a daunting task for anyone. While my grandmother has barely slowed down since the days of running her own clothing boutique, we still wondered: at nearly 90 years old, would she be able to adapt to an iPad?

The short answer is yes. My grandmother proved that she is still a fearless entrepreneur by setting herself a clear goal: she wanted to learn how to email us. So we started with baby steps. As soon as we could pry the iPad away from my eager younger cousins, Oma would try things like touching the screen -- lightly but not too lightly, quickly but not too quickly, interacting with one specific icon. She practiced sliding the bar to the right to unlock the screen, which, by the way, is actually pretty awkward to explain: "You know how you have keys for your front door? You also have to lock and unlock your computer. But without using a key. See, most computers have passwords, which are words that help you unlock the screen. But the iPad has a touchscreen where you have to move your finger from left to right. The screen? The screen is this flat thing that..." You get the idea.

After a while, the basic touchscreen movements became more and more intuitive -- so we moved onto more complex actions. We hid all superfluous icons like GarageBand (not that I don't believe she'll get there eventually!), and focused on one thing: making Mail accessible and easy to use. So we placed the Mail icon in the center of the bottom bar, and began by practicing opening and closing the program. Since we'd created a Gmail account for Oma, we started by sending her a few test emails, choosing "reply" and then answering them using the on-screen keyboard. This was where our initial groundwork with the touchscreen paid off. Letter by letter, Oma entered personal responses (albeit without periods or commas, we're saving that for another day) and clicked send. She also learned how to start an email from scratch, choosing "new message," choosing a recipient, entering the message, and sending it away with a digital swoosh sound. We were all fascinated and delighted when it all came together.

If the accomplishment of these simple tasks seems like anything less than a miracle, it's probably because using a computer has literally become second nature to you. But to someone just discovering one, it's like entering a whole new world. As Oma ventured into the digital realm, I saw that it took her courage, trust, memory skills, patience, and most of all incredible persistence to keep going. How else would you remember which of the buttons turn on the device? Or not get frustrated when the first ten times you touch the screen, nothing happens?

Vicariously living Oma's adventure, it became clear to me that the technology we take for granted is literally a new language, one that can and should be taught like any other. Look, if last year's Yahoo study on iPad use is true and only 13% of users are over 55, probably only a fraction of those are over 70 years old. Just think how much time most retirees have to learn these new skills, or how much they'd enjoy keeping in touch with you via email or Skype, if they're still able.

There's been a lot of focus lately on how young children are using technology, but there's also still time to give our grandparents the chance to send an email. Or to compose a song on GarageBand.