A new IPCC report is hot off the press this time focused on the potential of renewable energy sources to solve the climate crisis. Given the UN climate science panel's proclivity for producing scenarios guaranteed to make any thinking person lose sleep at night, the good news take-home message was a welcome cause for celebration.

From a technological standpoint, renewables can more than meet our global energy demands. By 2050, nearly 80 percent of our energy needs can be met by renewables with existing technologies. So it's clear that whatever challenges and difficulties lay ahead, they are entirely within our power to overcome, simply by adopting the right policy incentives.

A myriad of facts about the amazing rise of renewable energy can be found in the press releases of Greenpeace, WWF and the IPCC itself.

This labor of love (IPCC authors contribute on a voluntary, no-pay basis) will undoubtedly become a major source of discussion in the coming days and weeks. Or months -- after all, the report is 900 pages long. Climate deniers will look for conspiracies, and the nuclear and fossil fuel industries will seize on short-term costs and other obstacles to downplay the revolutionary message that shines through the study's conclusions.

But as I've said before there is no getting around one central conclusion -- like it or not we are in the midst of an energy paradigm shift.

This prevailing sense of change was clearly evident at the Creating Climate Wealth Summit last week in Washington DC, which brought together investors and entrepreneurs in the new clean energy economy. It was held at a rather unusual conference venue: the Washington Nationals baseball stadium.

Amidst the hotdog vendors at the top of the stands, there's a VIP area where some of the sessions took place and by some bizarre ironic twist, I accidentally found myself in the Exxon Mobil skybox. It was an honest mistake, cross my heart. I entered the room through a door marked with a 'W' mistaking the Washington Nationals logo for the Women's Room.

Imagine my surprise to suddenly find myself in a posh entertainment suite, replete with a massive Exxon Mobil logo on the wall and an antique Esso oil pump in the corner (the price showing a nostalgic 42 cents per gallon, with room for only a single digit to the left of the decimal point in the total purchase)! It was the epitome of all things anti-climate, anti-renewables, and anti-progress.

Suppressing my instinctive tendencies toward direct action, I contented myself with taking photos, including this framed company editorial hanging on the wall of the restroom: 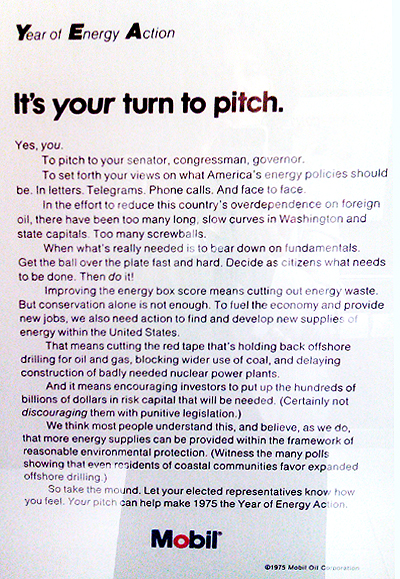 I presume it was selected because of all the good ol' American baseball metaphors, but its message appeared to be aimed directly at the 112th Congress:

Improving the energy box score means cutting out energy waste. But conservation alone is not enough. To fuel the economy and provide new jobs we also need action to find and develop new supplies of energy within the United States. That means cutting the red tape that's holding back offshore drilling for oil and gas, blocking wider use of coal, and delaying construction of badly needed nuclear power plants.

It all seemed a bit ho-hum until I got to the last line: "Let your elected representatives know how you feel. Your pitch can help make 1975 the Year of Energy Action."

1975! Back then, Mobil ran weekly paid op-eds on the editorial pages of major U.S. newspapers. This one serves as a fascinating reminder of how just how stuck the major oil companies are in an energy paradigm that is so last century. Written more than 35 years ago, it could just as easily have appeared last week. All these years later, and they're still whining about pesky environmentalists holding them back.

What's even more interesting is that oil industry leaders know they are a dying breed. A recent survey of business leaders in major oil and gas companies found that 90 percent of those who responded believed that "by 2025, renewables will be the most substantial energy source."

Let's face it, the end of the fossil fuel era is in sight. Hats off to the IPCC for showing the way forward not just for the climate crisis but for a wide range of other societal ills -- energy poverty, energy insecurity, and respiratory diseases to name just a few. May government policymakers have the wisdom to take the hand being offered to them, allowing us to pull ourselves out of the dirty, dangerous energy hole we've dug for ourselves as fast as we possibly can.