The iPhone 4S is hugely disappointing.

Let me repeat: Apple's new iPhone 4S -- with the fastest processor in a smartphone by miles, perhaps the most advanced and smartest voice command assistant on a piece of consumer technology ever, and the basic design and feel of the most wildly popular and beloved cell phone of all time -- is a big fat, tremendous letdown of a device, and the event where Apple CEO Tim Cook announced the new iPhone was the Al Capone's vault of product launches.

The soundtrack to the live stream should have been air being let slowly out of a balloon. What a downer. iCaramba.

It's not that the new iPhone won't be great. It will be one of, if not the, best smartphone available to consumers when it is released on October 14. After all, it is identical to the fantastic iPhone 4, except its antenna will be much-improved, the Internet and the apps will load and run faster and the camera and battery will put its predecessors' to shame.

And that -- exactly that! -- is the reason why everyone is so disappointed. It is exactly identical to the iPhone 4, except it got some nerd-friendly upgrades on its insides. Faster processors. Improved antennas. Increased camera pixels. Okay, okay, fine: But where is the improvement that I can see? And where is the improvement that my friends and co-workers and ex-lovers will be able to see and drool over and associate with me when I whip this shiny new Apple thing out? 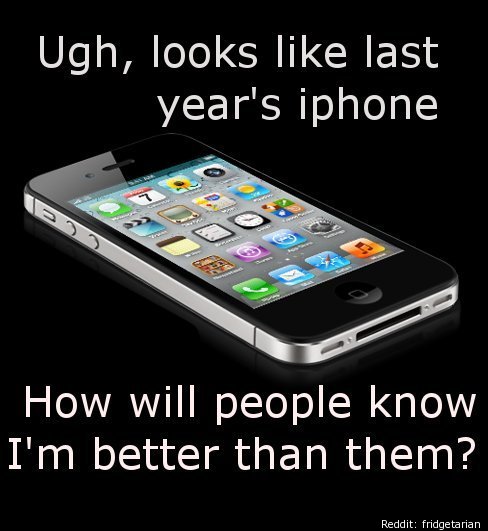 This is where the groundswell of disappointment and feeling of anticlimax is coming from: Apple had 16 months since the release of the iPhone 4 to design something sexy or revolutionary or forward-thinking, and they ended up showcasing a product that we have all -- for all intents and purposes -- already seen before.

The great allure of Apple products is that, in both design and user experience, the owner of the device feels as though he or she possess a part of the cutting-edge. The iPhone 4S is the first major release in recent memory of a bread-and-butter Apple gadget -- among the phones, the tablets, the laptops and, before that, the mp3 players -- that does not seem like it will make strangers turn their heads when someone plays with it in public soon after release. It feels like a horizontal move rather than a bold leap forward, for a company that for the past decade has simply owned the bold leap forward in the personal tech space.

Where is the pizzazz? Where are the rocket jets, the fireworks, the impossible design flourishes or the software and features that all the other companies will be scrambling to catch up with in the coming months?

Absent. For the first time in a while, Apple seemed like it was playing catchup with its rivals and patching up its own weaknesses rather than blowing up a technological space and thinking 3 years ahead of its enemies.

Yeah, so Apple released "Find My Friends": Are they going to use those Boost Mobile "Where You At?" commercials to promote it?

So Apple added on an 8 megapixel camera: Is it really so much better than all of the other 8 megapixel smartphone cameras that already exist, OR any of the 12 megapixel cameras on smartphones? And is the front-facing FaceTime camera still of conspicuously low-quality compared to its competitors?

So Apple released a voice command feature: Is it so much better than Microsoft's Tellme? Is this really the major innovation of the year in MacWorld? And does anyone actually want to use voice commands to look up the weather when they can do the same thing on an app with a finger swipe and a screen touch without having to talk to themselves in public?

No. The most shocking and innovative thing Apple launched at its event was a Christmas card app.

The iPhone 4S, to repeat, will still one of the best smartphones available for buyers today; An already strong smartphone became even stronger. The iPhone, with Siri inside, also instantly becomes the best smartphone for anyone with weak eyesight or any visual impairment. It deserves kudos for that, and for maintaining its status quo atop the smartphone quality rankings.

However: This release otherwise does nothing for Apple except make it a lot of money in the short term and give its rivals more time to catch up with or out-innovate it. Unless Tim Cook's "One More Thing ..." announcement is coming much later than usual this time around, a holding pattern seems to be in Apple's near-term future.

Perhaps I am being nitpicky. Perhaps I cannot see the 4S for the trees (sorry). Perhaps, too, everyone whining about the new iPhone needs to realize that it is still an excellent device and accept the fact that grumbling that the advancements from iPhone 4 to iPhone 4S were too incremental very definitely falls into both standup comedian's Louis CK's complaint that "Everything's Amazing and Nobody's Happy," and the popular Twitter hashtag #firstworldproblems.

And yet, still, there is the nagging sense that Apple held back or underperformed somehow at this media event. Now that the smoke has cleared, the balloons have deflated, the stock has dropped, the Internet has groaned and Apple has made all of its announcements and reveals and official pitches for its new technology, everything feels like a massive letdown, like post-Signs M. Night Shyamalan was directing the live stream.

It is, quite simply, a shock: The flair and forward-thinking that Apple seemed to once have a sixth sense for during these events seems to have dissolved just a tiny little bit; Apple, as a company and industry leader, no longer appears quite so -- another huge sigh on the day -- unbreakable.