CORRECTION: The iPhone 4S was originally listed as having a 1.2GHz processor. It has a 1.0 GHz processor. The chart has been updated to reflect this correction.

The ever-expanding Android smartphone family got a few huge new additions recently, with Motorola announcing the impressive DROID RAZR and Samsung outing the newest in the Nexus line, the Galaxy Nexus, the first phone to ship with the buzzed-about Android Ice Cream Sandwich. Both of these new Android handset will battle for consumer money against the current smartphone sales champion, the iPhone 4S. But which mobile device gives you the best bang for your buck: The iPhone 4S, the Samsung Galaxy Nexus or the Motorola Droid RAZR?

A few things to note here: The Droid RAZR will be getting Ice Cream Sandwich sometime in early 2012, according to reports. The special features list is by no means exhaustive and is based on what the manufacturers are promoting as key selling points for their respective phones. Also, as of press time, there is no definite price or carrier information about the Galaxy Nexus (though a recent rumor suggests it's getting seven U.S. carriers, not just Verizon).

Below is our Specs Appeal comparison for the Galaxy Nexus, Droid RAZR and iPhone 4S. 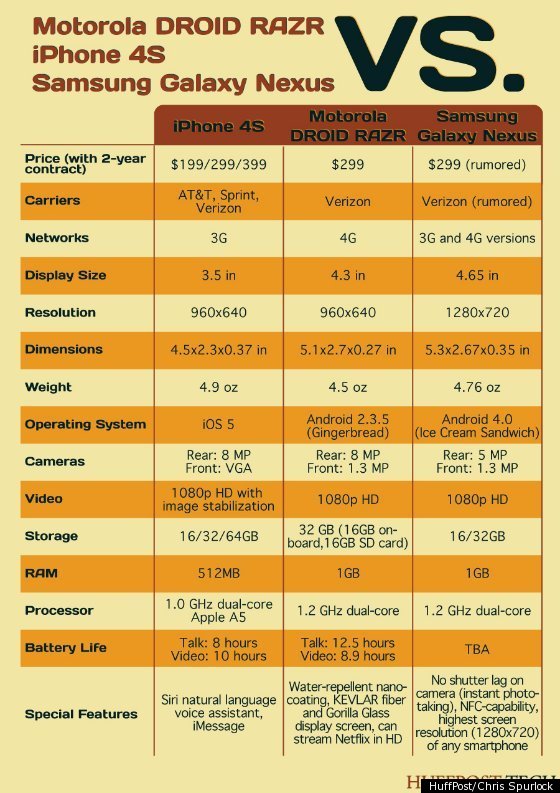