HONG KONG (Reuters) - It took little more than five hours for the first Apple iPhone 5s to go on sale in China after being smuggled across the border from Hong Kong, but supplies were short and prices high.

In a crowded building in the southern city of Shenzhen, a salesman stood by as shoppers speaking various dialects scrambled to take photos of three shiny new iPhones on display in his glass cabinet.

"The stock is so limited that people are treating these iPhone 5s like gems," said another cigarette-smoking salesman, surnamed Lin. "I pre-ordered online and got quite a few people to do the same but I could only get a few."

New Apple products are typically rolled out later in mainland China than in Hong Kong, creating a thriving "grey market" for enterprising traders. According to local media reports the iPhone 5 is expected go on sales in China by year-end.

Vendors such as Lin also make a year-round living exploiting the price difference between Apple and other popular brands in Hong Kong, a free port just an hour from Shenzhen with zero-duty on many electronics imports, and China.

At the iPhone 5's debut in Hong Kong earlier in the day, small groups of people carrying rucksacks filled with cash waited outside the city's flagship store hoping to snap up phones for resale.

For anyone able to secure one, the new phone cost HK$5,588 ($720), or the equivalent of around 4,545 yuan, at the Hong Kong Apple store, while they were selling for between 7,500 yuan and 9,000 yuan in the litter-strewn building in Shenzhen where fake and smuggled phones are often hawked.

But trade was slow.

On Friday afternoon, most vendors in the Shenzhen building still had their stalls filled with the iPhone 4S, promising that the latest model would arrive in the evening, when potential buyers were hoping to get a better deal. 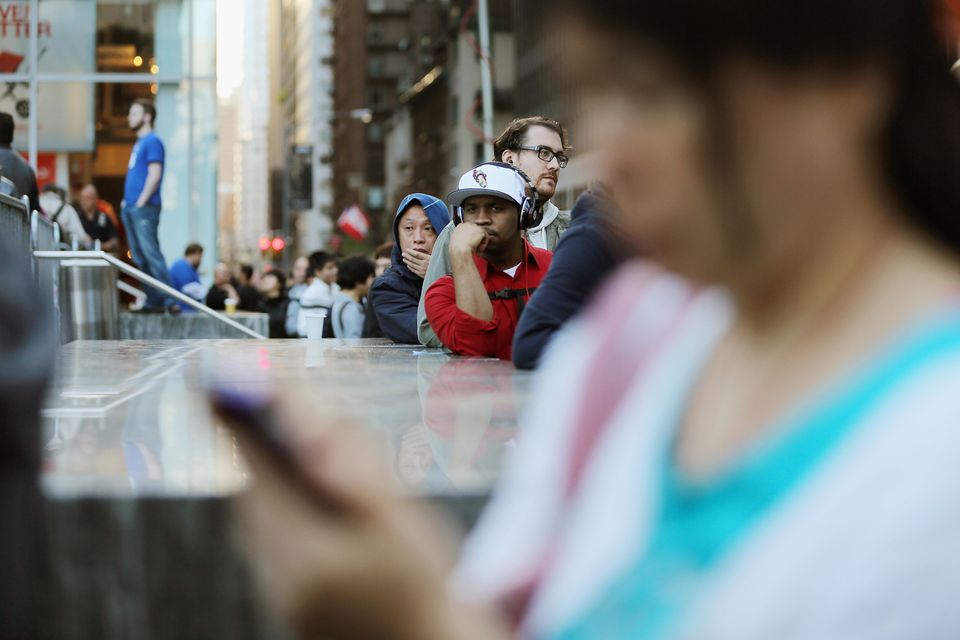 1 / 156
Hotly Anticipated iPhone 5 Goes In Sale In Stores
NEW YORK, NY - SEPTEMBER 21: Customers wait on line to purchase the Apple iPhone 5 outside the Apple Fifth Avenue flagship store on the first morning it went on sale on September 21, 2012 in New York City. Customers lined up for days to purchase the hotly anticipated device which went on sale nationwide today. (Photo by Mario Tama/Getty Images)
Getty Images