It may be shiny and new, but you could look at the iPhone 6 as a time warp to two years ago, as Ars Technica Reviews Editor Ron Amadeo points out in the following graphic. 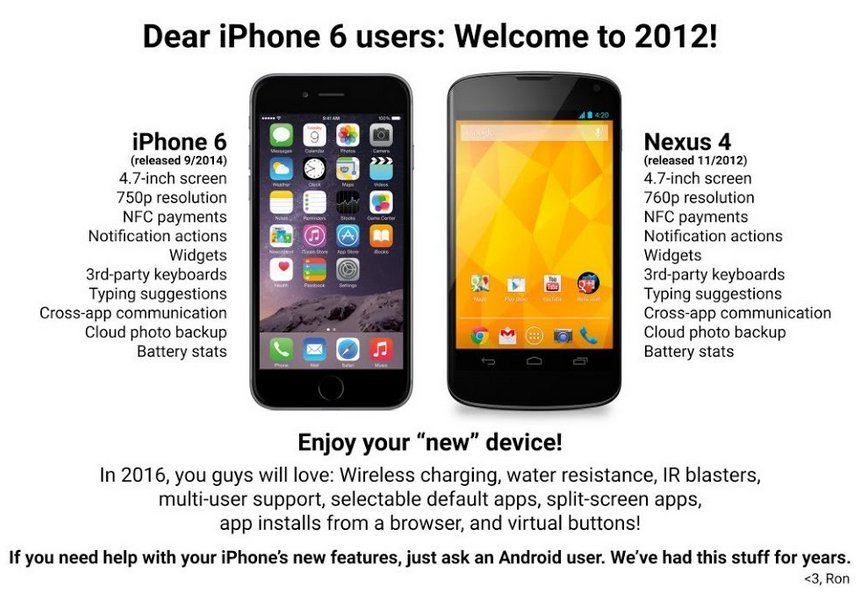 "I just wanted to put into a picture what a I thought lot of people would feel after the event," Amadeo told The Huffington Post. "A lot of iOS 8 features were on Android first, and bigger iPhones are a validation of the direction Samsung and the other Android OEMs have been pushing things. Android copied Apple a lot in the early days, but now it seems like the pendulum is swinging in the other direction."

He makes some good points. We got all riled up about iOS 8's ability to show which apps are killing our batteries, but many Android phones have had that capability for years. The iPhone 6 and Nexus 4 are the same size, and they both feature typing suggestions and have about the same screen resolution and size.

But don't let your feelings get too hurt, Apple fanboys and fangirls. There are still a ton of special features for you on the new iPhone 6 and iPhone 6 Plus.

The new iPhones (and some older iPhones) have Touch ID, allowing users to unlock their phones with their fingerprint. The iPhone 6 also has a bunch of cool photography and videography features that the Nexus 4 doesn't have, including slow-motion video. The iPhone 6 and 6 Plus can also shoot video in 1080p HD at 60 frames per second, while the Nexus 4 only has 30 frames per second.

At 4.55 ounces, the iPhone 6 is also slightly lighter than the 4.9-ounce Nexus 4. At this point, though, we're just quibbling.

Amadeo makes some great points at the end of his graphic. iPhone users will likely have to wait a few more years for a bunch of other features that are already popular on Androids, like water resistance and wireless charging. Can't argue with that!