The iPhone 6 is here!

Apple unveiled the latest version of its flagship smartphone on Tuesday, officially branding the device the iPhone 6.

The phone features a new Retina HD Display, and comes with a 4.7'' screen.

As expected, the phone also comes in a larger version called the iPhone 6 Plus with a 5.5'' Retina HD Display. This bigger iPhone benefits from a special one-handed mode.

When it comes to battery life, both devices offer improved performance over the previous iPhone, the iPhone 5s: 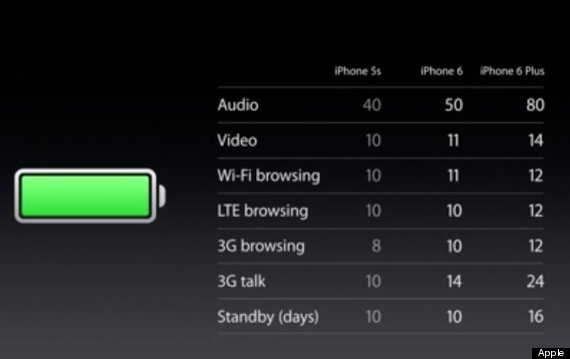 The iPhone 6 features 150 Mbps LTE technology and VoLTE for clearer-sounding phone calls as well as simultaneous voice and data transmission. Faster 802.11ac Wi-Fi comes standard on the devices, as well as Wi-Fi calling, allowing phone calls using a Wi-Fi connection rather than a cellular network. T-Mobile will be the first U.S. carrier to allow the new Wi-Fi calling feature.

The iPhone 6 and iPhone 6 Plus will feature Apple's new iOS 8 software and will come in multiple colors: Gold, Silver and Space Gray. Both models come equipped with the new Apple Pay technology for fast purchases using Touch ID.

In terms of pricing, the phones will be available with a standard two-year cellular contract in three configurations each:

With a two-year contract, the previous generation iPhone models will be available as follows: