Two photos surfaced on Monday that purportedly show the new, all-aluminum "iPhone 6" back panel. They fueled speculation that the Apple logo on the back of the new iPhone might light up.

Maybe the exterior of the "iPhone 6" back panel. Image courtesy of uSwitch.

The photos supposedly show the new iPhone's back panel. They were published Monday by UK-based price-comparison service uSwitch, which said it confirmed them as authentic with the help of noted Apple rumormonger Sonny Dickson.

Business Insider and MacRumors separately guessed that the white stripes depicted in the image above will probably not be included in the final iPhone design. Instead, they speculated, the stripes are probably a placeholder to let manufacturers know where to replace the aluminum with glass.

The image above also shows the rumored all-aluminum exterior of the new iPhone, along with cutouts for the phone's camera lens, flash and microphone. The current iPhone 5S's back panel is also mostly aluminum. But unlike the "iPhone 6," the 5S features a thin strip of gorilla glass that runs along the top and bottom of the casing as well. 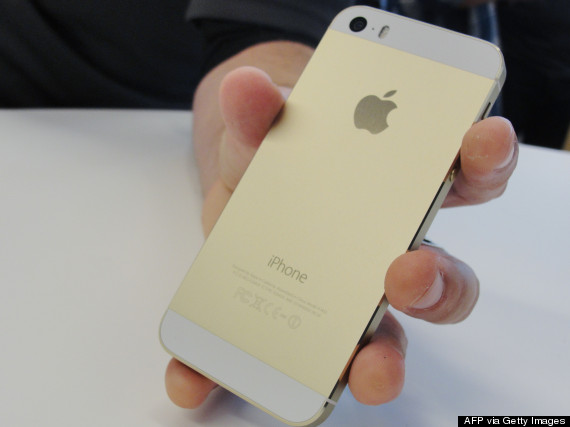 The back of the gold iPhone 5S.

uSwitch speculated that the new Apple logo might even light up when the owner gets new notifications. A photograph of the panel’s interior, also obtained by uSwitch, shows a thin piece of plastic where the Apple logo would be, which could let light shine through the logo on the outside of the phone. 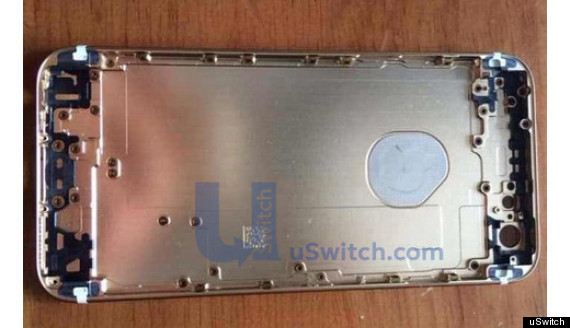 The purported interior of the ‘iPhone 6’ back panel, showing a thin sheet of plastic that matches the placement of the Apple logo. Image courtesy of uSwitch.

But a post on MacRumors disputed uSwitch’s theory on Monday. Instead, the site suggested that making the logo this way could simply be an aesthetic choice, and that the thin plastic panel could simply be necessary to let wireless signals travel through the metal casing.

Earlier this month, Apple was awarded a patent for creating “fused glass device housings,” which prompted speculation that the new iPhone could be made entirely of super-durable sapphire glass. But the rumor doesn’t jibe with this latest crop of photos, or with reports from industry insiders that suggest the new iPhones will have an anodised aluminum casing, plus a sapphire glass front panel.

The 4.7-inch and 5.5-inch iPhones are expected to hit shelves in the fall, though the larger iPhone model may be delayed until late 2014 or early 2015.