New findings released by Jumptap, a mobile advertising network, reveal that residents of the Southern and Southwestern United States tend to prefer devices running Google's Android operating system, whereas Apple's iOS devices are more popular in the Midwest and Northeast.

According to data (PDF) pulled from over 11 billion requests via 83 million unique users on the Jumptap network, Android has held on to its lead over other smartphone makers for another month by sustaining 38% of the overall mobile operating system market in June 2011; a four-point decrease from the previous month. On the other hand, iOS continues to gain ground by increasing its market share from 30.3% in May to 33% in June of 2011. Blackberry remains in third with a reported 22% market share in June 2011.

Apple will likely enjoy further mobile operating system market growth with the foreseeable launch of iOS 5 (and perhaps a new iPhone?) this fall. Android, on the other hand, has hit a few development road blocks this year. The release of Honeycomb, for example, was panned by GigaOM as a "rushed" effort. Nonetheless, developers have already started to point out "flaws" in Apple's iOS 5 beta version, as outlined by 'Today's iPhone'.

The most interesting finding in Jumptap's Mobile TAP report is a color-coded map displaying which mobile operating system is dominant in each state. According to the map, Texans apparently prefer Android, whereas Vermonters use more iOS devices than any other state. In general, "the South and Southwest tend to be Android-biased compared to the rest of the country, while those in the Midwest and Northeast lean towards iOS," explained Nathaniel Taylor in a press release published on Jumptap's website.

One can't help but compare the Android vs. iOS visualization to a map of red vs. blue states from the past four presidential elections, and the the similarities are undeniable. Could it be that Republicans prefer Android operating systems and Democrats are generally iOS fanboys? Jumptap's data seems to suggest just that. 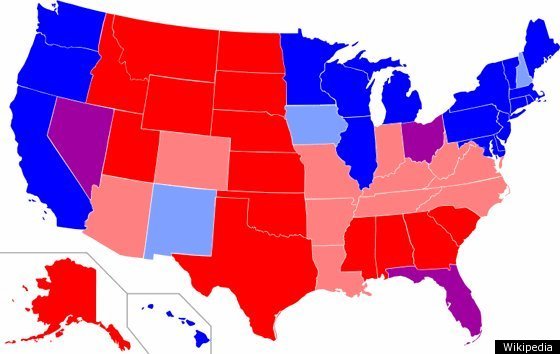 Read into it what you will, but important swing states in the upcoming 2012 presidential election, such as Florida and Ohio, turned up to be Android-dominant in the Mobile TAP report.

Share your thoughts in the comments (below), and tell us if you think there could be a correlation between political party affiliation and which mobile operating system a consumer uses.