For about five years now, the question for smartphone buyers has been a classic either/or: "Android or iPhone?" Answering that question is more difficult than ever, thanks to large advances in Android technology, as well as the emergence of a third viable option: Microsoft's beautiful Windows Phone OS.

This week, we'll attempt to break down your three options, looking at each operating system's greatest strengths and weaknesses. Which one you choose should depend largely on how you use your phone.

We've already looked at the iPhone, and assessed where Apple's smartphone flies and flails. Now we're going to look at the wide, wild world of Android smartphones, a much more vast universe of devices. Unlike iOS on the iPhone, Android is an open-source operating system that any manufacturer can use -- that means there are hundreds of Android smartphones out there, as opposed to just one iPhone. Popular Android phone manufacturers include Samsung, HTC, and Motorola, all of whom lay their own special "skins" over the plain Android OS to give their phones a distinct look.

At their hearts, though, all Android smartphones operate in about the same way. We'll be using Android 4.0, or Ice Cream Sandwich, as our reference point; click here for a detailed overview of what Google added to its operating system with that October update.

Navigation: Turn-by-turn navigation with spoken direction has been baked into Android's Maps for about two years now, and it's top-flight stuff. You can also add "layers" to see what kind of traffic a location has, what the terrain is like and where the bicycle lanes are. The Map also integrates with Google Places to show you what's around, and you can switch to a Satellite View to see the buildings overhead. Great Maps/navigation is a major reason to go Android, especially for those who do a lot of driving.

The Power Of Widgets: A widget is a kind of gadget that sits on your homescreen and performs a specific function. Imagine that, instead of a row of icons, you had a "widget" to tell you what the weather was, or a widget in which you could search Google, or glance at your Gmail. All of this can be accomplished without opening an app, and the size, position, and identity of widgets on your homescreen is totally customizable. Here's my homescreen on the HTC One X, for example, with a Flipboard clock widget, a weather widget, and a music player widget: This is the first thing I see when I unlock my phone's screen: 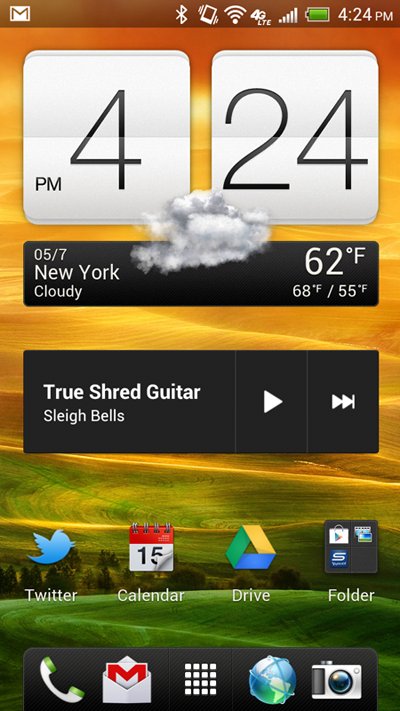 Integration With Google Services: Is your online life tied up in Google? Your best experience with Gmail, Google Reader, Gchat, Google Talk, Google Calendar and every other Google service comes with an Android phone, especially if you have multiple Google accounts.

Integration with Other Apps: We like the way you can share with other apps on Android phones. Pictures can be sent to Twitter, Facebook, Google+, Tumblr, wherever. You also have the option to import your Facebook and Google contacts into your phone contacts, sucking in a whole lot of phone numbers into your address book.

The 'Back' And 'Menu' Button: Unlike the iPhone, which features a single button that always takes you home, Android smartphones come with a Home Button flanked by a Back button (which takes you to your previous screen) and an App Switcher button (which shows you apps you've used recently). Not everyone likes these, but I think it's much more intuitive than navigation on the iPhone (especially for first-time users). Windows Phones also offer a back button, a Search button to launch Bing and a camera launch button.

Text Input/Correction: Of the three operating systems, Android has my favorite method of inputting and correcting text. The Swype keyboard (demo here) can be insanely fast for one-handed typists; I also like how Android shows you a row of three words you may have meant to type, rather than the bubble pop-up on iOS.

The Google Play Store: This is where you download your apps and media. Though Google has spent a lot of money to stock its Store with movies, music, and books, the Play Store still lags behind the iTunes Store in the quality of its apps, especially its games. The openness of the Google Play Store has also made Android users more susceptible to downloading malware through scuzzy apps.

Barrier To Entry: A lot of people argue that Android is too difficult to use for first-time smartphone buyers. The setup is certainly more complicated than either iOS or Windows Phone: My HTC One X has seven homescreens side-by-side, and then below that, a screen full of icons in alphabetical order. There's far more to keep in order than there is on the four screens of the iPhone, or the two screens of Windows Phone.

Ugly?: Consensus seems to be that, of the three major smartphone operating systems, Android is the ugliest. HTC's phones are probably the most attractive of the Android designs, but Windows Phone and iOS are far more elegant.

Touch Responsiveness: Windows Phone devices and the iPhone flow much more smoothly, and scrolling up and down on screens is more fluid than it is on any Android device I've used, even the newest ones.

Support: Because of how many different Android devices there are, tech support for your specific Android smartphone may be harder to come by than if you go Apple or Microsoft.

SO, WHO SHOULD BUY AN ANDROID PHONE?

The short answer: Someone who is minimally technically-proficient, gets directions on his or her phone often, and has his or her digital life connected to Google services like Gmail and Gchat should go Android.

A longer answer might be that, regardless of travel hours or Google reliance, the more time you spend with your phone -- the more time you use your smartphone as your primary computing device -- the better the Android operating system becomes. The ability to customize your phone's layout, and share media between apps and services, and having direct access to Google's full range of web outfits makes managing your life through your smartphone much easier. Android 4.0 smartphones bring you the closest to the power of a full desktop computing experience.

To get there, however, you have to learn how the platform works and do a little bit of setup; Android's not the best choice for the casual user. You also have to sacrifice the beauty and fluidity of Windows Phone and iPhone in return for that computing power. The question, then, in a nutshell: Beauty or brains?

Download
Calling all HuffPost superfans!
Sign up for membership to become a founding member and help shape HuffPost's next chapter
Join HuffPost
Voting Made Easy
Register to vote and apply for an absentee ballot today
Register now
Jason Gilbert
Contributor
Suggest a correction