In our series exploring the smartphone options out there, we've already looked at the iPhone and the Android operating system, and the pros and cons of each. We've decided to skip over BlackBerry, as Research In Motion reels and prepares to release its redesigned operating system some time this fall. So, with iOS and Android reviewed, and BlackBerry omitted, that about wraps it up for viable smartphone options, right?

Windows Phone is Microsoft's entrant into the smartphone wars, and it has won widespread critical acclaim (though not many users). Like Android, it is available on smartphones from several different manufacturers, most notably Nokia, with its $100 Lumia 900 on AT&T.

Microsoft's Windows Phone is a hit with the critics, but should you consider buying one? Let's look at its advantages and disadvantages:

Beautiful AND Fresh: It's arguable whose design is more beautiful: Windows Phone, with its large, square "live tiles," or Apple's iPhone, with its iconic rows of apps. Not arguable is that Windows Phone's Metro interface is newer and fresher than Apple's. Fashionistas and hipsters take notice: Microsoft(!) has the hottest design in smartphones today. Scrolling up, down, left and right is exceptionally satisfying and smooth.

Simple To Use: Windows Phone comes with two screens total: One is your "live tiles," or your customizable home screen, and the other is an alphabetical list of all of your apps. It is the easiest smartphone operating system there is; it's even more intuitive than Apple's.

Physical Camera Button: Microsoft has mandated that all smartphones running Windows Phone must come with a physical camera button somewhere on the device. That button also allows you to focus without touching the screen. It's a much more intuitive and natural photography experience than is offered by the iPhone and Android smartphones, which do not have camera buttons.

All Conversations In One Place: Windows Phone does a neat thing with your messages, automatically grouping each conversation in one window, regardless of where the convo is taking place. So, if I'm talking to Bianca, I can text her, then message her on Facebook, then on MSN Messenger, and it all shows up in the same place -- no need to switch apps even if your conversation partner does.

Keyboard/Editing Text: Windows Phone has the most elegant solution for editing a typo or inserting a new word: When you press your finger against the screen, a cursor like you would see in Microsoft Word pops up just above where you're pushing. This makes it much easier to control editing documents, text messages and emails. Like Android, the autocorrect feature is a row of suggested words: 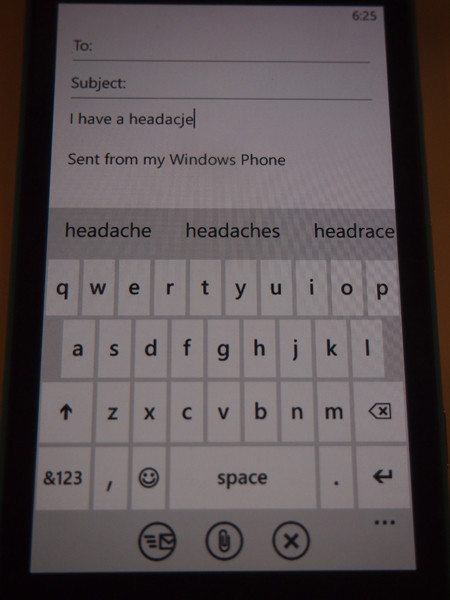 Hotmail/Microsoft Word/SkyDrive Integration: Hotmail and MSN are easily accessed and manipulated by Windows Phone, as are the various applications in the Microsoft Office package (Excel, PowerPoint, OneNote, Word). Users who store data and media on Microsoft's burgeoning cloud storage app, SkyDrive (which we really like), will also find excellent integration on Windows Phone devices.

Mediocre App/Game Selection: Facebook, Twitter and Foursquare are beautiful on Windows Phone, but once you get past the major apps, the Windows Marketplace looks pretty barren. That's not a problem if you're only after the biggest applications, but if you want a deeper pool of utilities and games to choose from, you're better off with iPhone or Android. (To quantify: Windows Phone has about 80,000 apps; Android, 500,000; iPhone, 600,000). We've also seen major apps launch on Android and iPhone before they do on Windows Phone; WP users are still waiting for Angry Birds: Space, for example.

Google, Where Art Thou?: The integration with Gmail is pretty bad; I especially miss the ability to archive emails with one press of a button. Gchat support is weak. Bing Search and Bing Maps don't stand up to Google Search and Google Maps in the discovery department; searching for shops near you by category is surprisingly hit-or-miss. Navigation is still much better than on iPhone, however.

What Are These Icons?: For an operating system that's so easy to use, the little icons, with no text beneath to explain what they are, are needlessly confusing for a first-time user. These are all over Windows Phone. Here's a mystifying example -- Windows Phone is on the left and Android is on the right: 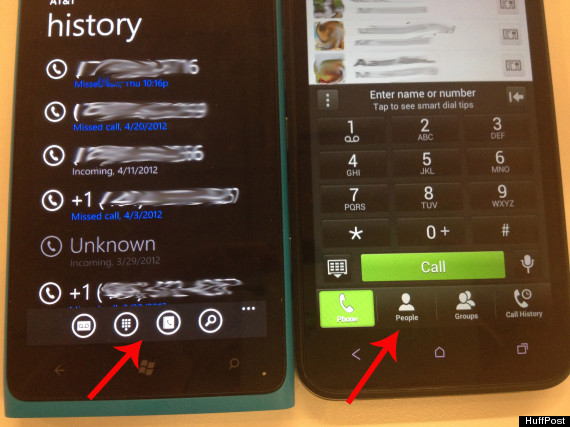 Where's The Voice-To-Text?: Windows Phone is the only OS out of the big three that doesn't have speech-to-text integrated across the whole system. That is, on iPhone and Android, the keyboard features a microphone button so that you can say what you want to type on the screen. Though Windows Phone comes with some voice features -- you can launch apps and text messages and search Bing -- you can't use your voice to type, which has always been what I've used microphones for the most on my smartphone.

CLARIFICATION: You CAN dictate text messages, either by long-pressing the Windows button or using the Speaker icon on the text message screen. What I want to see is that Speaker icon available anywhere you can input text: on emails, in search, on maps, etc., for faster input of text via speech.

Zune Software Needed: In order to update your phone's operating system, you need to download a Zune application for your desktop and connect your phone via cord. Android and iOS both come with wireless updating.

SO, WHO SHOULD BUY A WINDOWS PHONE?

First: Windows Phone is the best operating system for a smartphone newbie, someone who wants a simple smartphone that is easy to use and that can make calls, check email and surf the Internet. This person doesn't download a lot of apps or need to customize his or her phone or unlock it or anything: He or she just wants the basics of the smartphone in a beautiful, simple package. That's the meat-and-potatoes Windows Phone market, the shoppers who should most seriously be looking at Windows Phones.

Others who should be looking at Windows Phone include those with Hotmail accounts and those who do lots of work with Microsoft software. Those who value strong, clean design and hipness in their gadgets might also consider Windows Phone.

It's still difficult, however, for me to recommend Windows Phone over Android or iOS. This might change in a year, but right now the iPhone and especially Android just offer a far more robust, complete set of features and applications for buyers. Windows Phone -- despite its splendid aesthetics and smooth operation -- feels about a year away from being truly on level with Android and iPhone for a heavy smartphone user.

That said, if you're a casual phone user, and you don't think you'll be using your smartphone for much more than Internet surfing, email and checking your social networks, Windows Phone is a solid, fast and beautiful choice that won't disappoint.

Take a look at the slideshow for an overview of the Nokia Lumia 900.