A lot of the iPhone's features have changed since the first one debuted in 2007. iPhones have gotten slimmer, faster, lighter and significantly more useful. They haven't, however, gotten a better battery.

As you can see in this graphic from data visualization site Dadaviz, Apple's iPhone has had about the same amount of battery life throughout most of its iterations over the years: 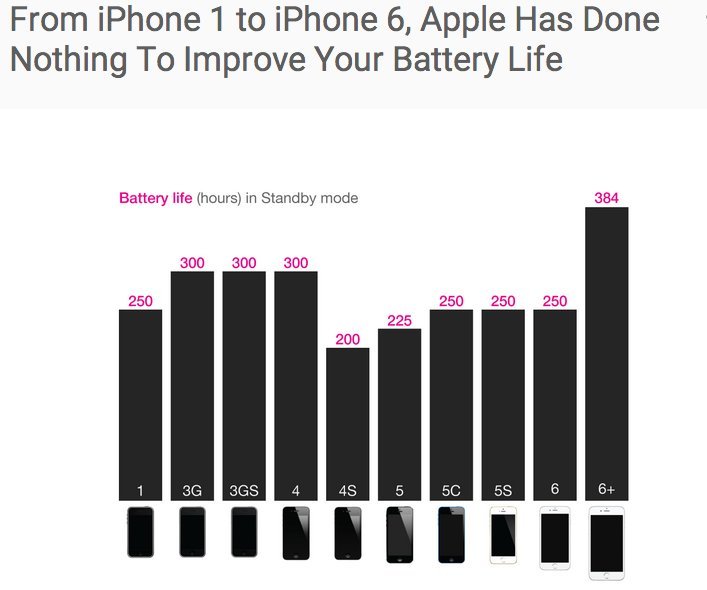 The iPhone has had an average of 250 hours of battery in "standby" mode. From personal experience, many can tell you that this number falls significantly as soon as you take it off standby and start to use it.

The iPhone 6+ has the best battery life by far, mostly because it's so much larger than older models, making room for a bigger battery.

(As a point of comparison, the Samsung Galaxy S5 supposedly gets 480 hours of battery life in standby mode.)

It's not as if people aren't hankering for better battery life. Last month, Fortune conducted a survey of over 1,000 U.S. adults, asking what new or improved smartphone feature they'd most like to see. Thirty-three percent of people surveyed said improved battery life got them the most excited.

The problem is, in order to give a phone a better battery, Apple would have to sacrifice trademark features like thinness and lightness. As tech reporter Kevin Roose has pointed out, our phones are getting thirstier for more and more battery, and using it up more voraciously as time goes on.

If battery life is important to you, we recommend carrying an external battery pack or buying a phone that lets you switch out its battery, like a Samsung Galaxy S5. That way, once your battery gets burnt out, you can just replace it.