This post was previously published on Mother Would Know.

A bag of rice saved my iPhone a few days ago. I am often klutzy, sometimes dumb and occasionally very unlucky. On Sunday I hit the trifecta, managing to be all three at once. There's a happy ending to this story and this may be the most useful piece of advice you ever get from this site, so read on. You might wonder what all this has to do with cooking. Well, the story centers on food, or at least an ingredient, and my tech rescue occurred in the kitchen. Plus, if you know anyone who reads online media and doesn't consider their cell phone at least as important as any kitchen tool they own, let me know.

I pride myself on being independent, beholden to no one. But, alas, I am a slave to my iPhone and my computer. Sunday afternoon I was checking email and Twitter, probably puzzling over my son Liam's latest move on Words with Friends, and generally being all-too engrossed by my iPhone. I headed into the bathroom, intending to put the phone on a shelf, but instead it slipped out of my hand and into the toilet bowl. Horrified, I watched it sink into the (clean) water, then grabbed it. And there I stood, sopping wet iPhone in hand. My expression should have been captured for a visual definition of "oy gevalt!"

I can't believe I'm telling this story because all I could think of at that moment was how relieved I was that no one had witnessed this debacle. I shook the phone and water sprayed out. My panic increased after a minute or so, as the background on the phone's face went blank. It's kind of ironic that the background normally on my phone has been bubbles of water. But now it was just lit up -- no background, no icons, no nothing. 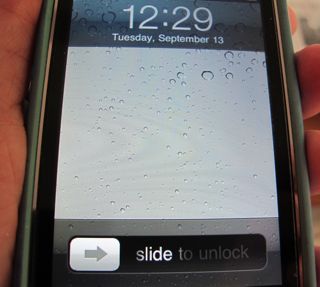 So I quickly did what any self-respecting technology idiot/addict would do. I ran to my computer and googled "wet iPhone," "how to fix iPhone dropped in water" and several other word combinations that elevated my predicament from a humiliation to a research project. Within five minutes I had YouTube videos and tech posts, all with the same theme: bury the iPhone in rice.

I'm in a 12-step program to address my overstuffed pantry problem, but in the meantime, I have cans, bags, boxes and glass jars of food like you wouldn't believe. Suddenly my failing turned into a lifesaver, as I grabbed my five-pound bag of jasmine rice and poured a large amount into a plastic bag. I buried the iPhone in the rice, closed the bag and wondered if there is a prayer one can say for healing an injured cell phone. 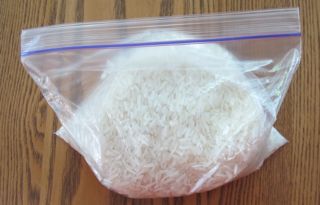 The rice burying advice time varied between five hours and three days. I opted for 12 hours, realizing that I wouldn't be able to stand the suspense overnight. I kept the iPhone by my side, cosseted in its rice bag, as if I was on a bedside vigil. I went back to work in my kitchen, glancing over at the bag every once in a while. To say I was anxious is a considerable understatement. Did I mention that I am cheap? The thought of buying a new phone gave me visions of dollars, flying off my budget and dropping into an abyss from which I would never recover them.

At one point I heard the phone ring. I didn't take it out of the bag, fearing that to wake the phone from its induced coma too soon would be fatal. I was fearful in any event, because the advice was to turn off the phone before burying it, but my phone wouldn't turn off. I couldn't get the SIM card out either.

Midnight seemed like the fitting time for a moment of truth. At the appointed hour, I pulled the phone out of the bag. Other than having to pick out rice kernels from a few holes, it was revived! I'm one lucky lady this week -- my iPhone is alive again and I'm back to calling, tweeting and enjoying my addictions to Scramble and Words with Friends. As I write this post, I'm hopeful that you won't need my "phone saving" rice advice. But if you do, you'll be glad you keep more rice than you needed for last night's dinner. Maybe I should get ahead of the curve for the next home tech catastrophe and google "coffee on a laptop keyboard"?