Can't take your eyes off the iPhone? You're not the only one.

EyeTrackShop, an eye-tracking technology company, released a study which showed that people look more frequently and for a longer amount of time at iPhones and iPads than they do at phones or tablets made by Amazon, HTC, Motorola and Samsung.

In the phone category, the iPhone 4S was the clear winner against five competing Android devices (Motorola Photon 4G, Samsung Epic Touch 4G, Google Nexus S, HTC EVO4G, Samsung Galaxy II 4G). Participants looked at the iPhone 4S first, longer, and with a more focused gaze than at any of the Android phones.

The study involved 200 participants, whose eye movements were measured via webcam while they looked at images of either phones or tablets on a computer screen. During each test, participants were shown all of the devices from one category (phone or tablet) on one screen.

According to Forbes, EyeTrackShop acknowledges that this was only a preliminary study, and if they do a follow-up study they would vary the order of the images on the screen to make sure the placement wasn't influencing the results.

As you can see in the images (below), both Apple devices were placed in the upper left hand corner of their respective screens, which is the place people's eyes naturally go when reading a page. It makes you wonder if it wasn't actually that people love looking at iPhones and iPads so much, but that they get tired of looking at smartphones pretty quickly. It's interesting that EyeTrackShop would choose to place both Apple products in the same favorable position.

"Apple is still in a dominating leader position in the smart phone and tablet market," Bander said.

While it's true that Apple is highly visible in the market (and has an iconic look), Apple phones are not the most popular. Android phones actually have the largest market share in the U.S. at 43.7 percent, while Apple only commands 27.3 percent.

However, Bander's market share theory does make sense as an explanation of people's preference for the iPad. In 2010, the Apple tablet ruled the market: 83.9 percent of all tablets sold were iPads. However, recent data collected by Gartner showed that that number is expected to drop over the next few years. In 2015, Gartner predicts that the iPad will command 47 percent of the tablet market, and Android tablets will command 38 percent.

Participants in EyeTrackShop's study also answered questions about their brand awareness and whether they intended to purchase any of the phones. According to Bander, there was a correlation between their eye movements and their wanting of the phones. Said Bander, "We know if they saw it and gazed at it for a longer period of time, they will have better brand and message awareness and our tests show higher purchase intent."

Check out EyeTrackShop's heat map (below) showing where participants' attention was focused while they looked at the phones and tablets. The red areas indicate the places where a more direct gaze was held, while the green areas show a more scattered vision pattern. The iPad and iPhone are the only gadgets that show a relatively large area of red. 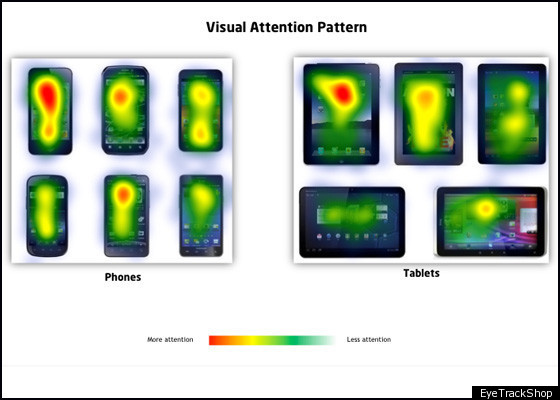