Let's say you're in a dimly lit restaurant for your friend's birthday, and you want to capture the surprised look on her face as the cake arrives. As one does, you whip out your iPhone and snap a photo in the dark.

That's all very nice of you, but there's a problem. Yes, dear reader, your photo sucks.

Don't worry. By the end of this post, you'll know how to take a quality picture in the dark using only your phone -- or, well, two.

1. Steal a friend's iPhone for a minute. Really, this trick can be performed with any two phone cameras. We'll run through it with the iPhone. But no matter what, you're going to need two phones -- one to take the picture, and one to use as the light source.

2. Choose your assistant. The easiest way to do this is to ask for a friend's help, but if you want to pay and/or force someone that's fine too.

3. Pull up the flashlight. One person takes his or her iPhone and turns on the flashlight, which can be found when you flick up from the bottom of the screen.

4. Set the stage. At this point, our lighting assistant should hold his or her iPhone above the photo-taking phone in order to create a flattering light. The photographer also must turn off his or her iPhone's flash. Here's an example of how to hold the two phones, but it's a little hard to see because... it's in the dark. 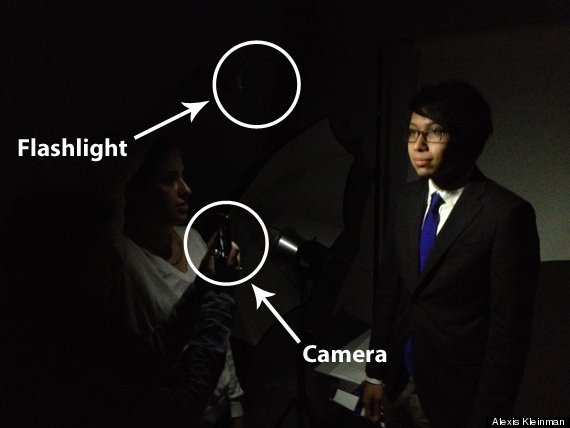 Fun fact: Once you are an expert, you can perform both roles on your own.

5. Take the photo. Below, you'll see two photos. On the left is one taken in a dark room using only my iPhone's flash feature. I think we can all agree my colleague Kim Bhasin doesn't look as dashing as he could.

On the right, you'll see a photo I took in the same exact place using the technique I just taught you. Now Kim looks like a model, except better. 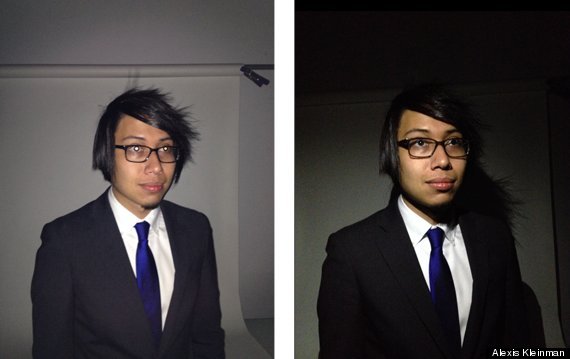 Your photos are about to get a whole lot more flattering, and your friends will thank you. You can thank us later. Thanks for reading.