If you believe the veritable hordes of anonymous sources and "insiders with knowledge of the situation" who have been whispering in the ears and inboxes of nearly every tech blogger on the planet, the iPhone 5 is scheduled for release in mid-to-late September. The generally-reliable folks at Apple blog iMore have pegged the specific release date as Friday, Sept. 21, a date that, if correct, not only represents National Miniature Golf Day, but also the day on which many Americans will attempt to sell their old iPhones online in order to make way for the shiny new one while grabbing some cash back in the process.

But if you are looking to sell your current iPhone, and you wait for the new iPhone to actually hit shelves, you're probably losing out on a good deal of money. Nothing illustrates the money you're leaving on the table by waiting like a good old-fashioned line graph, and Gazelle.com, an electronics website that buys old gadgets, has released just that: an informative chart that should make you think twice about holding on to your previous-generation iPhone for too long. 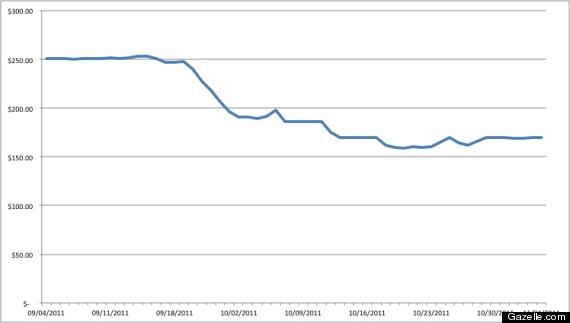 Now, there are several things that potential iPhone sellers should note here (and from other, similar charts).

First, the iPhone 4S was announced on Oct. 4: After that date, the price declined steadily, but not dramatically.

Second, the iPhone 4S was released on Oct. 14: After that date, the price declined steadily, but, again, not dramatically.

Third -- and most importantly for someone trying to maximize resale value -- the most drastic price dive occurred not on the announcement date, nor on the release date, but instead on the rather innocuous Sept. 21, 2011. Know why? That's the day that Wall Street Journal-affiliated blog All Things Digital reported that the next iPhone would be unveiled by Tim Cook on Oct. 4. Because AllThingsD is such an especially reputable source for Apple news, and because reporter John Paczkowski was able to give a definitive date as well as event details, prices for old iPhones began to plummet, losing $70 in trade-in value in about 10 days. From a peak of over $250 in the days leading up to the AllThingsD reveal, an iPhone 4 fetched just about $185 on the day Apple announced the iPhone 4S (and it didn't go on sale, remember, until Oct. 14, at which point it was down to about $165 in trade-in value).

That precipitous decline in trade-in prices for the iPhone 4S hasn't occurred quite yet, Gazelle's Chief Gadget Officer Anthony Scarsella said in a telephone interview: A 16GB AT&T iPhone 4S in good condition still fetches $277 on Gazelle, or more than enough to defray the initial cost of buying a 16GB AT&T iPhone 5 when it becomes available next month. Though well-respected news outlets, including Reuters, Bloomberg, The New York Times, and -- yes -- All Things Digital, have reported that Apple is expected to hold an event the week of Sept. 11, iPhone sellers are apparently waiting for a more concrete announcement, which could come any day now.

Scarsella assumes that the bottom will fall out of these inflated iPhone prices near the beginning of September, or about two weeks before Apple's iPhone event and three weeks before the actual release; that's in line with when prices started falling last year. Keep in mind, too, that on many gadget trade-in sites you can lock in your price for weeks: On Gazelle, an offer is valid for 30 days, while on NextWorth, you have 21 days to actually mail in your iPhone. That means you can claim the value of your phone and then hold on to it for a while before you actually say goodbye and put your old mobile in the mailbox. Any smart seller will lock in their price as soon as they can, because the amount of money that Gazelle, NextWorth, eBay and the Amazon marketplace will be willing to offer for an iPhone 4S will only be decreasing over the next several weeks.

Though you'll want to ship away your current iPhone as quickly as possible for maximum cash, there are obvious hurdles you'll have to overcome, too. First, we won't definitively know the iPhone event's date until Apple officially announces it, and once Apple does announce it, resale value will go down; that's a fair amount of guesswork, and a lot of faith you'll have to put on those anonymous sources and whispering insiders. Second, you can't know when the iPhone will be available at your local store: What if supplies are extremely constrained, and it's a month before the "iPhone 5" is in stock? And, third: How can you know if you'll even like the next iPhone before you've seen it or know what it's capable of?

And yet, if you really are serious about semi-blindly committing to the next iPhone while also reaping in cash-money from a re-sale of your old iPhone, you should start devising your game plan now. A few questions to ask: Do you have an old cellphone that you can pop your iPhone's SIM card into for a few weeks? How long can you go without a smartphone? When do you estimate you'd be able to actually obtain the new iPhone, given a release date of Sept. 21? The answer to those questions will largely determine just how soon you'll be able to sell off your old iPhone, and thus how much money you'll be able to get for it.

As Anthony Scarsella of Gazelle reiterated to me several times over the course of our phone call, the earlier you trade in your iPhone, the better. In other words: Sell it today, if you can, and if not today, then tomorrow. If you're going to be one of the tens of millions who upgrade to the iPhone 5 this September, why not see if you can turn a profit on your purchase?

For more, check out the Wall Street Journal on why now is the best time to sell your iPhone: