After analyzing data from nearly 10,000 smartphone users, online dating website OkCupid has found what it says is "statistical proof that iPhone users aren't just getting [screwed] by Apple."

OkCupid tracked sexual activity (measured in number of partners) by smart phone brand. It found that, on average, a 30 year-old iPhone user has had twice as many sexual partners than an Android user of the same age. Thirty year-old BlackBerry users fall somewhere in the middle. See the chart below: 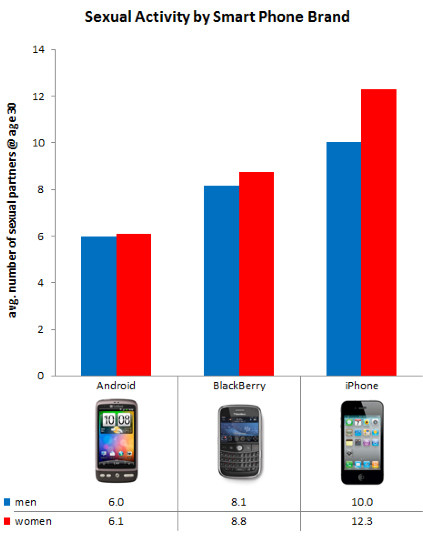 The online dating site's blog, OkTrends, says of the data: "We found this data as part of our general camera-efficacy analysis: we crossed all kinds of user behaviors with the camera models and found we had data on the number of sexual partners for 9,785 people with smart phones."

OkCupid also plotted a graph showing how the number of sexual partners varies according to smartphone brand and age. See chart below: 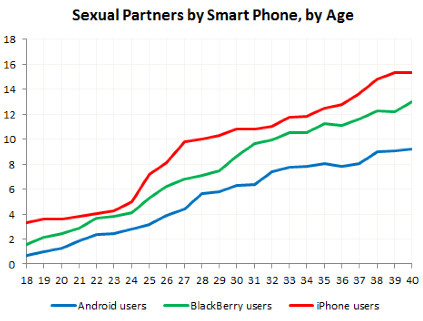 Phone retailer iPhone4u recently released the results of their own not-so-scientific study, which found that male iPhone users were luckier in love. As we wrote here, they reportedly surveyed 1,500 women and found that 54 percent of them said they would be more likely to date a man if he has an iPhone.