When you have a flamboyant gay in a supporting role on your reality show (and if you don't, you're really doing something wrong), there are a number of ways that you can maximally utilize their talents. For instance, you can:

A) Make them say sassy asides that don't relate to anything but that are funny because, GAY
B) Make them dress in outrageous ensembles that may or may not be meant for the opposite sex (i.e. floor-skimming maxi skirts)
C) Make them dance and/or vogue for no reason (again, because, GAY)

The first five minutes of this week's episode incorporate all of the above and make absolutely no sense, which, I think, deserves a slow clap.

[Continue reading when you're finished.]

Pope's first clients this week are Michelle and Gary, who need help because they are different religions, which you'd think they'd have thought about earlier, maybe sometime before marriage, or, say, 37 weeks gestation. But Michelle is Catholic and Gary is almost comically Jewish, and never the twain shall meet. Except genitally, I guess, hence the baby.

Anyway. This issue is, like most, beyond Rosie's area of expertise but not beyond the scope of what she's willing to blindly dive into. However, since the topic of religious intolerance is kind of heavy for such a light show, she first addresses the fact that Michelle cannot (or will not) cook or clean. To this end, she and LT cover Michelle and Gary's swanky apartment with toys, diapers, and onesies covered in imitation -- but still vile -- poop. They "surprise" Michelle with their gift and then watch as she cleans. Rosie, ever detail-oriented, also brings a machine that simulates a baby's cries, which she turns on approximately every five seconds, forcing Michelle to run to the nursery. Then she dons an apron and tries to show Michelle how to use a broken food processor. This is a woman who is, allegedly, certified to teach infant CPR. Forget Obama's birth certificate; I'd like to see Rosie Pope's diploma.

As usual, Pope brings in an actual expert to deal with the real problem at hand, which, as usual, begs the question: Why doesn't the couple just call a therapist? (The answer, I believe, can be found in the many cameramen lurking throughout the apartment.) Even though Michelle and Gary had a non-religious wedding, each wants their daughter to be brought up with their religious background -- Gary won't go to a baptism, Michelle balks at the thought of a bat mitzvah (eh, so do I, but only because you have to wait so long to eat). I don't feel qualified to take sides, especially since I was raised to believe primarily in Santa, but Michelle has the more obnoxious attitude of the two. "If I'm Catholic, she's Catholic," she says, asserting that all religions get passed through the mother, and that she envisions her daughter as "a mini version of me." Ultimately they reach a compromise: The baby will be baptized, but then, at the after-party, there will be a Jewish naming ceremony. Rosie gets all of the credit, naturally.

The second client of the week is Mina, who is one week away from a scheduled C-section and who has never touched, cared for, or, apparently, thought about, a baby. Mina is a housewife who is supported by her financier husband's income and "loves to shop," and yet somehow, in nine months, she has not found time to take a childbirth class or set up a nursery, which is sharing space with her "office."

Honestly I'm surprised there haven't been more people like Mina on this show. She is like the grown-up version of those spoiled brats you see on My Super Sweet 16. Instead of doing anything herself, she hires people to do it for her, and somehow people think she's cute. She has a tiny dog, but you knew that already (it pees in the house, on a pad that it will probably soon share with the new baby). When Rosie brings in a former client and her 3-month-old son, Mina cannot even support the infant with her tiny, atrophied pterodactyl arms!

(FYI the best part of this episode are the "Bitch, please" looks the former client gives Mina as she attempts to diaper the woman's child.) 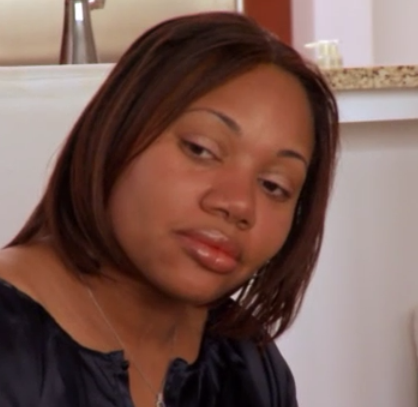 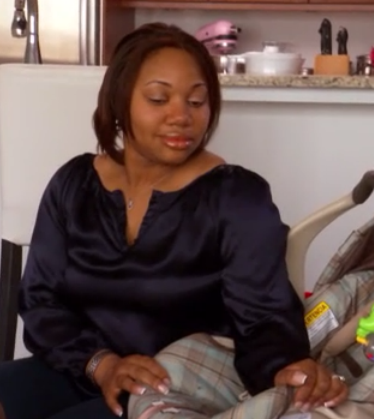 There is no expert cure for being lazy and entitled, and so Rosie simply yells at Mina until she feels she has gotten her point across. Somehow, despite the verbal abuse and obvious condescension, Mina then requests that Rosie accompany her and her husband, Herman (who has been whipped into a runny flan of a man and barely gets any air time), to the hospital. I don't believe that any of these bitches want Rosie riding to the hospital with them, but I bet it's in their contract with the show.

Anyway. The babies are born, and Michelle deigns to let her daughter associate with Jews, and Mina realizes that she actually likes looking at, and sometimes even holding, her son.

Again, I implore you: slow clap. Don't ever tell me this woman doesn't make a difference in the world.

Next week: There is a couple with long, scraggly hair... and guitars! Is Rosie going slumming? Also, there is some kind of fashion show for an entitled woman's charity event. There is drama. It looks boring.

P.S. I want to quickly acknowledge another storyline on the show, which I haven't mentioned, and that is Rosie's quest to conceive again through IVF. I haven't really written about it because it's sad (this week, she reveals that she had an ectopic pregnancy that resulted in getting one of her fallopian tubes removed) and also because it makes me feel kind of bad for saying that Rosie talks like her tongue is stapled to the roof of her mouth. Considering that this is Bravo, I'm willing to bet that by the season finale Rosie will be successfully knocked up, but until then I'm probably not going to mention it much. Except for this disclaimer. I do honestly hope she can have another baby, and I sincerely apologize to Jesus, Yahweh, and Santa for being mean to her on the internet every week. Even though she is kind of a moron. I am probably going to hell anyway because I wasn't baptized and also I used to steal candy from the grocery store as a child. In my defense it was in a bin with a coin box that operated on the honor system, and sometimes I would put buttons in, which I'm sure were used to clothe the needy. Amen.

P.P.S. I am aware that Michelle's child is a girl and that there were no brises discussed in this episode. It just went so well with the word "bitches," you know? As detailed above, I have no integrity.