Can I just say, first of all, that this show's cold opens are funnier than The Office's? Rosie always waltzes into her own store looking totally confused, like she took a wrong turn at Big Ben or the Sydney Opera House or Platform Nine and Three Quarters or wherever the hell she's from, to find Hannah sitting meekly at her desk, the sad Non-Flamboyant Gay whose only job is to make fake phone calls, and LT, who is invariably vogueing or schooling his sad NFG protege in the art of fierceness (lesson one: sternum-baring jumpsuits!). This week the two-minute mini-drama centers on a sad pair of Band-Aid-colored "pregnancy suspenders." "I guess they're to hold up your pants?" sad NFG Hannah mumbles. Oh, honey.

Rosie's first client, Melissa, lives somewhere outside NY in one of those Real Housewives of New Jersey mansions that look like Disney Land Tudor estates.

Her husband, Jared, blames her for their reproductive challenges (Melissa had several miscarriages) and shows off their wedding photo with the following explanation: "This is us at our wedding, pre-pregnancy for Melissa, when she was weighing 105. So we need to get her back to looking and feeling that way." What a charmer.

Also, this is the photo: 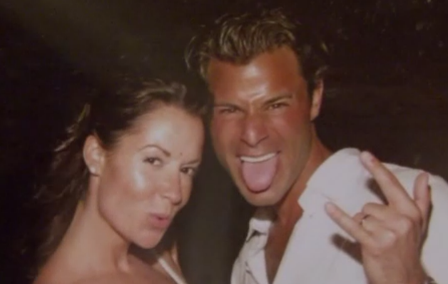 Anyway, apart from her super charming husband, Melissa has a team of six slaves -- including a house manager, baby nurse, prenatal educator, personal trainer, and doula -- who do everything from feeding her to putting on her shoes, but she needs a seventh dwarf, Lispy (that's so mean, but I just can't help myself), to help her plan a bridal shower that will double as a charity event. In a rare moment of self-awareness, Pope wonders aloud why she is there. "I mean, most people would just call a party planner." EXACTLY. But most people don't want to be on TV that badly.

Rosie decides that a maternity fashion show highlighting her latest collection would be the perfect shower event (because that is in no way a conflict of interest), and we soon learn the real motivation behind this choice -- a model casting montage in which LT wears a sequined capelet the color of Grimace from McDonaldland and tells the models to "serve and deliver." LT would make a great army sergeant, BTW. USA! USA! Sashay ! Shante!

The day of the shower, Rosie arrives to yell at the immigrant workers who have not yet finished welding tiny crowns onto all of the household cabinet handles, and help to dress Melissa, who is not pleased with what the Rosie Pope collection does to her figure. To Rosie's horror, Melissa makes her grand entrance wearing what she terms "a jersey mumu" (or, "Jersey mumu"... you really can't tell with those sibilant Ss). I think Melissa looked better in that than she did in Rosie's dress, which looked like a mylar balloon stretched over a tuba, but what do I know? Later, Rosie and Melissa bond over IVF cycles, and all is well. Melissa and Jared go on to have a supercute baby named Greyson, and they even dismiss the harem so that they can raise him with their own four hands. Progress!

This week's second couple, Lisa and Steve, are friends of sad NFG Hannah's sister, and Hannah pleads with Rosie to take them on even though they're not "your typical millionaire clients." Indeed, Lisa and Steve are heavy metal fiends who dress like roadies on the Rock of Love bus and whose small outer-borough apartment is adorned with skulls, swords, and electric guitars. They need help readying their apartment for their baby -- at this point, they don't even have space for a crib.

Now. I thought this would be hilarious, especially since within the first five minutes of the visit, Steve says, "Rosie comes to my house, disrespecting my He-Man sword collection, and I'm extremely upset." Comedy gold, right? Rosie should work with plebeians all the time, right? Wrong. The socio-economic difference makes what would normally just be annoying condescension feel like self-righteous, class-based condescension, which is no fun to watch.

"You have curse words on your wall!" she exclaims, pointing to Steve's prized guitar, which bears a sticker reading "Fuck you, you fucking fuck."

"If our baby comes out reading, we'll be rich," Steve deadpans. Golf clap.

This leads me to another brief digression, about baby-proofing. Namely, why is Rosie so obsessed with it? I may be naive, but the baby doesn't actually crawl, let alone walk, for a good five or six months, right? And even when they walk, they're like two-feet tall. So shaming parents for having anything -- even something dangerous like a He-Man sword -- hanging high up on the wall seems a tad premature, no? End of rant.

In the end, Rosie sends Lisa and Steve away while she and a team of minions redecorate their house. And the results are... strange. The apartment looks like a Marriott mated a Hard Rock, which was recessive. It's cream-colored and generic, but with rock and roll "accents," like "passionate" red throw pillows (?) and a mobile above the crib hung with tiny guitars (okay, that's actually kind of cute). There's also a mural of an elephant dancing with a girl in a pink dress that I can only describe as... messed up. But the rockers love it, and longhair Steve even doles hugs. The poors: so forgiving!

But then my love for Lisa and Steve is challenged by a song she performs at an East Village bar with lyrics like, "Pray for rock and roll/Pray for our baby." She is also wearing a tiny top hat: 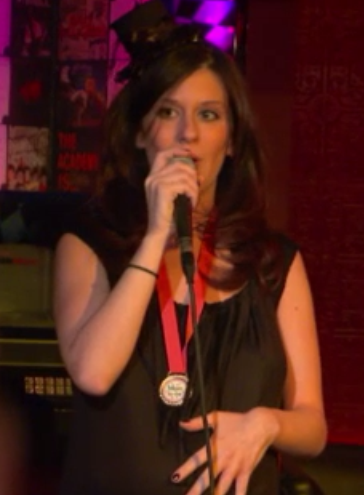 Oh, well. They have a cute baby girl in the end. As instructed, I will pray for her.

Next week: The naked horse lady cometh! Finally! There's also a woman who cries when she thinks about giving birth. Awesome.