So, first of all, thank you to everyone who alerted me to the Pregnant in Heels sketch on SNL last weekend. Tina Fey plays a rich PR woman with a list of high-maintenance demands ("I wanna have a water birth, but instead of water, I want Diet Coke.") but Abby Elliot is absolute genius as the Popester (When asked, "What's wrong with your voice?" she replies, "Well, I was born in England, moved to America, and every morning a thousand bees sting my tongue.")

Can't we just watch the fake SNL show instead of the real thing?

Anyway, this week we learn in the opening slapstick segment that LT often serves as a "pregnant" dress model when Rosie is too lazy to put clothes on the mannequins. LOL, right? Sigh. Sometimes I wonder if LT even works there or if he got pulled by casting agents off of a gay cruise musical revue of Paris is Burning.

This week is the NAKED HORSE LADY episode, which you all know I've been waiting for since the very first promo. Naked horse lady, or "Nicole" if you want to get formal, works at the Central Park Zoo, where she is a goat whisperer. Okay, that's not her exact job title, but it's basically the gist. Nicole has a horse named Cosmo, and as a gift to her husband she wants to... get naked on it! And make a painting! Because nothing says I love you like putting your labia on an Appaloosa and then capturing it in a piece of art for all time.

Nicole also has fears about becoming a mom, because her own mom died when she was 10, and she's afraid of doing the same thing to her son. Which is sad. Then she gets preeclampsia and has to deliver five weeks early, which is also sad (Rosie, who someone let into the hospital for some reason, tells Nicole, "He just wants to get out and see you," and, while I'm not a doctor, I'm 99% sure that is not, in fact, what preeclampsia means). But her son, Griffin, is fine, and the great news is that she still wants to do the naked horse painting! Everyone wins!

Rosie, LT, and some poor artist who Bravo paid to do this decamp to a farm outside the city. LT, naturally, chooses this occasion to wear a leather bandeau top and pants. 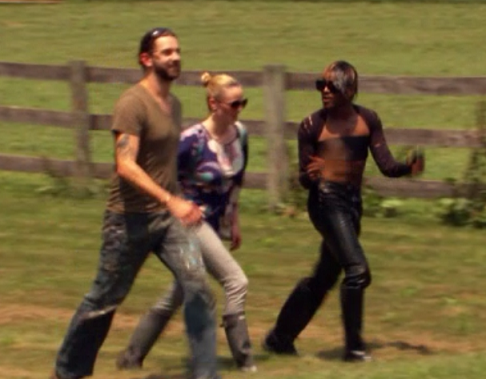 ("I'm not so much a person as a collection of choices," said the actor playing LT in the SNL sketch. And, well...)

The actual naked horse posing is relatively uneventful: Nicole takes her top off, her boobs are blurred out, and she sits there, trying to look as dignified as one can look in that situation. The real payoff takes place a few weeks later, at the portrait's unveiling. Nicole has chosen to reveal the "surprise" to not only her husband, but to a group of their closest friends. Pregnant in Heels offers many life lessons, but perhaps none so useful as this one: If you are going to unveil an oil painting of your naked body atop a farm animal in mixed company, maybe give people some warning first.
Here is the finished product: 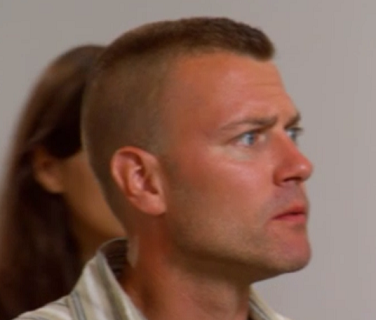 Middle-aged Ted Mosby and his date try to conceal their horror: 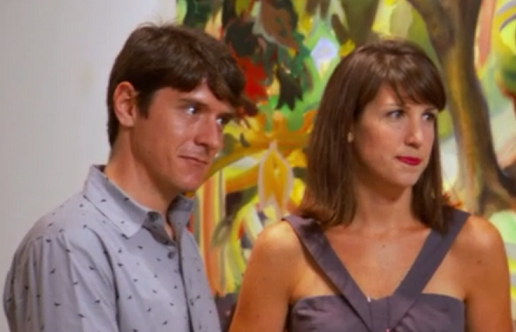 And Nicole's husband, Porkpie (sorry, I forgot his real name) just tries to Care Bear Stare it all away: 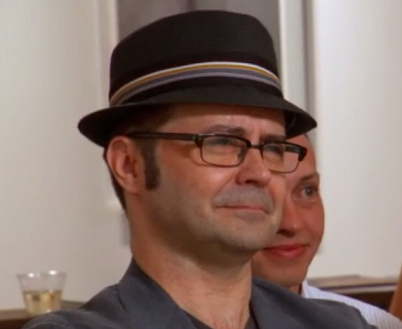 "I did not see that coming," he sputters. He must not have been watching the previews.

Rosie's other client this week is Cindi Avila, who is apparently a NY1 anchor. Cindi needs help because, despite willingly growing a small person inside of her, she is completely squeamish about every aspect of birth. She freaks out about needles, is in denial about the baby actually coming out of her hoo-ha, and feels that breastfeeding is "unnatural." Under normal circumstances Cindi would be one of those scheduled C-section women, but knives are even worse than needles, so she's sucking it up and doing it the ol' fashioned way.

Eventually Cindi gives birth to a healthy baby girl, braves her IV, barely flinches through her epidural, and even decides to let the baby feed from her teat. I love watching personal growth, don't you? A horse would have helped, though.

Next week: Two couples are fighting and Rosie plays marriage counselor. "I feel like she doesn't love me," one dude says. Seriously, Bravo? Give me a woman who wants a giant cake made in the likeness of her placenta. If I wanted to see relationships fall apart, I'd be watching The Bachelor: After the Final Rose.