Wow, guys, can you believe we made it to the season finale? Eight whole hours of laborious couch-sitting and rich bitch judging? Me neither. Why did I even start this? Oh, right, because I'm pregnant, in flats, and a Bravo ho.

So, the most exciting thing about this episode is that Rosie gestates and gives birth to a baby in less than 50 minutes. Talk about efficiency. But more on that later.

Let's meet this week's clients. First, we have Lucy and Matt. Lucy is a successful lawyer who plans to return to work after their daughter is born, leaving Matt -- who looks like the love child of Eric Stoltz and Gary Sinise... no points, just saying- -a s the full-time caregiver. Matt claims to be an "actor," but watching him swim in the pool, crack open a beer, and talk about the hours he spends at the gym, I'm thinking cabana boy, a la Garcia in She-Devil (rent it, rent it now). ANYWAY. Rosie arrives at the house and immediately spot-checks for hazards, as is her wont. "They can swipe knives, they can swipe china," she tells Matt and Lucy, as if coaching them on how to use their infant for clandestine thievery. The Pope also opines that babies will eat pet food (no joke, y'all -- I have a scar on my face from when my dog caught me eating out of her bowl), although I'm not really sure how that can be remedied. Pets have to eat from bowls on the floor, so the kid is just going to have to deal... or use her new-found knife skills to tell that bitch to step off.

Even though Matt is gearing up to be a stay-at-home dad, he predictably has never held, changed, or fed a newborn, so Rosie gives him a crash course in baby care, using a doll. As Matt attempts to change the limp, plastic infant, Rosie emits the pained, bleating cries of a constipated goat. While making this face: 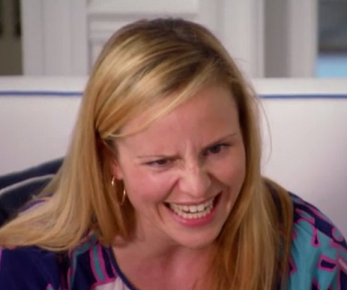 Wait -- a few episodes ago, didn't she have some fancy device that played the sound of a real baby wailing? Whatever, I'm not going to look a gift idiot in the mouth.

Next, Rosie brings over a live infant to keep Matt company for the day while he preps for a dinner party and Lucy runs off with LT for a "spa day"... which is really a kamikaze bikini wax session. ("In order for the baby to come out properly, it's important for that jungle to be cleared of all evil," says LT. I hope that after this show gets canceled he can find work as a Sherpa, or maybe an exorcist.) I am not even going to ask where this baby's mother is or why she allowed a strange man to handle her child for a day without even standing over him rolling her eyes to great comic effect. I will just say that my reaction to this stunt was the same as the baby's: 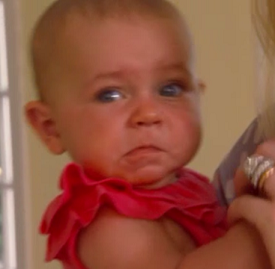 Even though she spends most of the day sobbing while Matt puts her diaper on backwards and misplaces her car seat, Matt feels bonded to this baby, and even cries when she leaves at the end of the day. Awww. It is kind of sweet, you guys. My little Grinch heart grew at least half a size, but then shrunk back down again when I saw that Matt and Lucy named their daughter Malibu Taylor. Will the next one be Tropical Miko? Sadly, we will never know.

The second client this week is Michelle, a first-time mom whose husband is MIA for the entire episode (good judgment, dude) and who likes referring to herself in the third person as "mama." As in, "Mama's gotta keep it cute!" which is, incidentally, her reason for hiring Rosie. Because Michelle needs to keep up her hair and nail appointments, she requires a nanny -- a task Rosie is qualified to accomplish, for once! I know, I know, she could have just gone to nanny service, but I bet the nanny service wouldn't force poor unemployed middle-aged women to compete for work in a boot camp format, and where's the fun in that?

Michelle has simple requirements for her hired help: They have to be able to speak Spanish, because her husband is Dominican and they want the baby to learn both languages. They have to be willing to prepare meals. And they can't "look better than mama." Rosie nonetheless looks stricken. "Finding a nanny that's experienced, not sexy, bilingual, and can cook... that's like finding a needle in a haystack," she says. Yes, Rosie, if haystacks were made of needles, that's what finding Michelle's ideal nanny in New York would be like.

Rosie and LT assemble a group of candidates for a "speed-dating" round, in which Rosie and Michelle ask each potential nanny a series of rapid-fire questions, and which is largely an excuse for LT to dress in a cape and hold a bell. 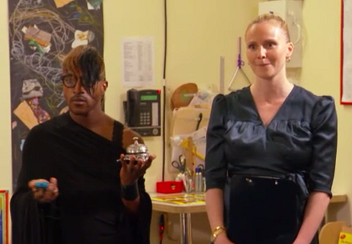 They narrow the field down to three finalists, who must come to Michelle's house bearing samples of their home cooking (!). Then the final two have to compete American Gladiator style in Central Park with two rented toddlers (again -- where are the parents?). The nanny who thought to put sunscreen on her charge, even though she fed him a "test" cookie from his snack bag, prevails. Wow, that was dumb. Which is exactly what this show is supposed to be. Golf clap!

Okay, so let's talk about Rosie's uterus. They must not think this show is getting picked up for another season, because otherwise you know they would have stretched that pregnancy shit out -- look at Rachel Zoe! Anyway, I'm still confused by the way they decided to edit the "Rosie might be infertile" plot line. We get almost seven full episodes of build-up, and then -- hooray! -- she's pregnant with a miracle baby (which, I'm sorry, she totally knew before that ultrasound, because if they can see a head, chances are you've already peed on plenty of sticks, not to mention started your registry). And then, in the final episode, she tells LT and Hannah she's pregnant in the first minute of the show, forty minutes later she and her husband are finding out the sex (via a card that their doctor prepared... what, no color-coded cake?), and then five seconds after that she's delivered the baby. Who is named Wellington (I guess we can just breathe a sigh of relief it's not Spotted Dick). This whole climax happened a bit... fast, no? And yes, that's what she said.

I wish I could give you a dance outro as magical as the one on last night's Pregnant in Heels, but I might tip over. So instead, I will just wish you all well. As LT might say, keep serving it to the children, honey. Make them gag.

If you liked these recaps, you can always find me on my blog, The Sassy Curmudgeon, bringing shame to my family.