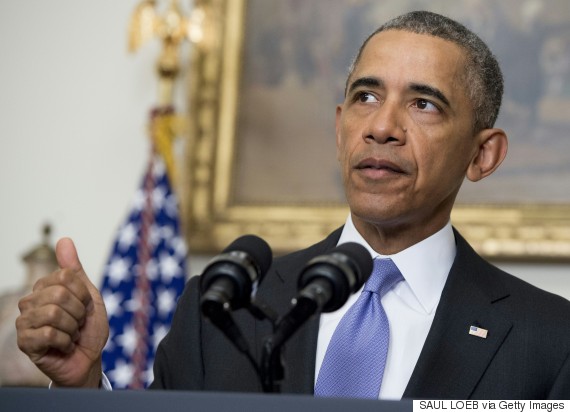 U.S. President Barack Obama speaks about U.S.-Iranian relations. The presidential statement comes after the lifting of international sanctions against Iran as part of a nuclear deal capped by a U.S.-Iranian prisoner exchange. (Photo: Saul Loeb/AFP/Getty Images)

By Mark Dubowitz and Annie Fixler

The Islamic Republic of Iran is energetically trying to legitimize its financial sector despite a decades-long rap sheet of illicit financial activities. Since the conclusion of the nuclear deal, also known as the Joint Comprehensive Plan of Action, the White House has missed numerous opportunities to issue sanctions against Iran's ongoing illicit activity. Instead, in an effort to keep Iran committed to abiding by the nuclear deal, the administration is now acting as Tehran's chamber of commerce.

Washington's bipartisan effort to hold the mullahs accountable for their awful non-nuclear behaviour -- their support to designated terrorist groups; incitement of sectarian conflict in Syria, Iraq and Yemen; and abominable human-rights violations at home -- are, in the administration's eyes, of lesser importance than the JCPOA. This explains the perceived need to financially reward the Iranian leadership for backing the atomic deal. It also explains why the administration already has broken its promises that it would only suspend or lift so-called U.S. "nuclear sanctions" while vigorously enforcing non-nuclear sanctions against the regime's malign behaviour.

Iran complains that it has not received the sanctions relief it was promised, but the administration did its job. It lifted the nuclear-related sanctions against Iran earlier this year, and kept some terrorism, missile and human rights sanctions in place. But now the Iranians want all sanctions lifted.

President Obama, fearful that Iranian president Hassan Rouhani and the nuclear deal he negotiated might not survive the next Iranian presidential election in 2017, has committed himself to Rouhani's re-election. This is an unwarranted fear: Every Iranian president since the early 1980s, including the reformist Mohammad Khatami and the firebrand Mahmoud Ahmadinejad, served two terms. Nevertheless, to help Rouhani, Obama has now decided to oppose any sanctions that limit Iranian economic growth, including those permitted under the JCPOA.

The fact is that Tehran already has received an economic windfall. The JCPOA (as well as the interim agreement in place during the negotiations) provided Iran with substantial economic relief that helped it avoid a severe economic crisis and even enjoy a modest recovery. The lifting of restrictions on Iran's use of frozen overseas assets, totaling about $100 billion, now gives Iran badly needed hard currency to settle its outstanding debts, further repair its economy, build up its diminished foreign-exchange reserves and ease a budgetary crisis. Needless to say, these funds also allow the regime to increase its aggressive actions abroad.

When the administration defended the Iran deal to a skeptical Congress, it stressed that the deal would not inhibit Washington's continuing efforts to check Iranian aggression and the mullahs' long-standing aid to terrorist groups. It emphasized that Washington would remain vigilant in its efforts to check Tehran's bad behaviour. President Obama himself promised that Washington would "continue to vigorously enforce sanctions pertaining to Iran's support for terrorism, human rights abuses and ballistic missile programs." But the president now appears cowed by Iranian threats that it would view any imposition of sanctions as a violation of the deal and grounds to "snapback" its nuclear program.

The administration also seems uninterested in stopping Iran's domestic repression, which has intensified with a record number of executions in 2015.

The administration has since allowed the weakening of missile language in the key UN Security Council Resolution that had, in an earlier version, explicitly banned long-range ballistic missile development -- which administration officials quietly admit is a sign that Iran still harbors nuclear ambitions. Alarmingly, according to the terms of the JCPOA, Iran could legally import in eight years the missile technology that it now procures illegally.

The administration also seems uninterested in stopping Iran's domestic repression, which has intensified with a record number of executions in 2015. When Rouhani was elected in June 2013, there was a widespread assumption that he would shepherd in an era of greater freedom. Yet, as United Nations Special Rapporteur on human rights in the Islamic Republic of Iran Ahmed Shaheed reports, there has been no "meaningful change on the ground."

Sadly, since the JCPOA was reached, the administration has only issued about a dozen new designations to counter Iran's continuing malign behavior including weak missile sanctions that will do nothing to change the regime's strategic calculus. The administration has imposed zero human rights designations since the JCPOA and only three since Rouhani came to power in 2013.

Meanwhile, Secretary of State John Kerry and other officials are touring European capitals to encourage banks to re-enter the Iranian market. The White House is reportedly mulling a new unilateral concession that Iran did not negotiate as part of the JCPOA: Iranian use of dollarized financial transactions through offshore dollar-clearing, inter-bank book transfers and conversions, or some other kind of mechanism that would allow Iran access to the dollar.

This concession undercuts the efficacy of future non-nuclear sanctions, which depend on the private sector's perception of the severe financial risks associated with any Iranian transactions. Easing dollarized transaction restrictions will only serve to aid the current concerted Iranian push to legitimize its financial sector. And Iran will achieve this without changing its behaviour.

If the White House won't challenge Iran, Congress should do what it can to uphold America's commitments. Sanctions need to continue to target the regime's support for terrorism, ballistic-missile development, aid to Bashar al-Assad's regime in Syria and designated Shiite militias in Iraq, and human-rights abuses. These steps are not a violation of the JCPOA, but rather an affirmation of stated U.S. policy to "oppose Iran's destabilizing policies with every national security tool available."

Mark Dubowitz is executive director of the Foundation for Defense of Democracies, where he focuses on Iran and directs its Center on Sanctions and Illicit Finance. Follow him on Twitter, Facebook, and LinkedIn.

Annie Fixler is a policy analyst at FDD's Center on Sanctions and Illicit Finance. Find her on Twitter: @afixler