Iran's conservative parliament just had a significant makeover -- and it's one worth taking note of. It all started back in 2013 with the election of President Hassan Rouhani, a moderate politician who eased relations with the West through careful negotiations and ended a decade of tension and isolation for Iran. Now his once shaky political path appears to be in full swing. In the final round of parliamentary elections held on April 29, moderates won big, conservatives came second, independents came third and radical conservatives with close ties to former President Mahmoud Ahmadinejad were mostly voted out. This is a departure from the previous two parliaments, which were dominated by conservatives who challenged the new presidential administration. And it means that Rouhani -- and the moderates of Iran -- will now have more power and can make a stronger footprint.

The highly contested runoff election was the second in Iran since the historic nuclear deal struck with world powers. In the first round of parliamentary elections in February, a little over three-quarters of the parliament -- 222 members -- were elected. Those candidates who did not win the required minimum 25 percent of the votes had to compete again for the remaining 68 seats in the 290-seat chamber. One hundred and thirty-six candidates competed in 21 provinces this time around. In the second round, there were no minimum votes required and those with the highest votes simply won. The election saw a continuation of the pattern from the first round, with moderates having the upper hand and hard-liners being eliminated by voters.

Key to this upper hand was an unprecedented coalition between the moderates and reformists who came together under the slogan "second step," referring to President Rouhani's 2013 victory as the "first step" toward a path of moderation. This group produced a unified "List of Hope" for the parliamentary elections back in February that became a unifying force against hard-liners. Paramount to the success of the previous election, the campaign brought together supporters, using social media and celebrities to help attract voters to the cause. The List of Hope was victorious once again last week. Moderates have now scored a total of 143 seats, which though just short of the majority still makes them the largest fraction in the parliament, or Majlis. They will now have the upper hand after over a decade of a conservative-dominated Majlis.

From opposing the nuclear negotiations to impeaching key ministers, parliament made it increasingly difficult for Rouhani to fully realize his moderate political agenda -- until now.

Meanwhile, conservatives won a total of 86 seats. Most of them were centrists with fewer hard-liners. Members of the outgoing hard-line faction have been staunch opponents of the nuclear deal. In the past three years they made every effort to derail negotiations and prevent the final agreement. Losing this power could mean their efforts to thwart the deal will now bear less weight than in the past. The remaining 61 seats went to candidates who ran as independent, including five reserved seats for religious minorities. The exact numbers have been fluctuating among different media and political parties because there had been overlap among the lists.

"What made these parliamentary elections unique was the high number of independent candidates," Ali Jamali, a board member and campaign manager of a prominent reformist party in Tehran, told me. "These are moderate conservatives who are scared to associate with the conservative party because hard-liners have destroyed the image of conservatism in the society."

Jamali sees these new independent members of parliament eventually siding with the administration of President Hassan Rouhani and in turn giving him support for his moderate domestic and international policies. 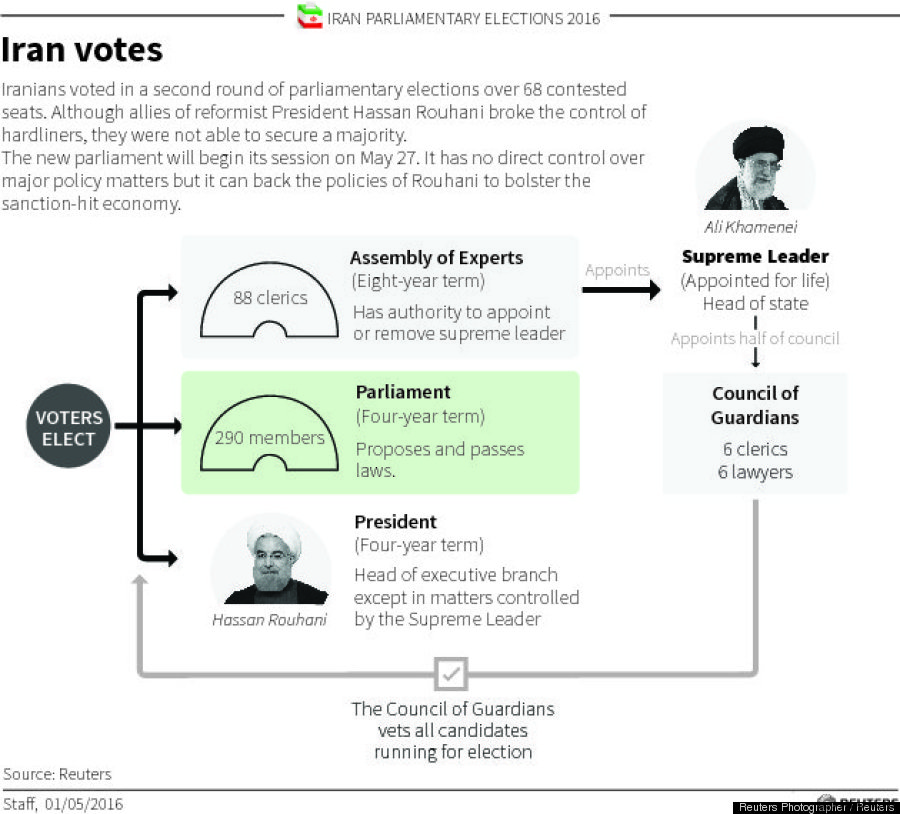 A look at Iran's governmental structure in light of the April 29, 2016 parliamentary election. (Reuters)

Another important change resulting from these elections is the high number of female members slated to be a part of Iran's parliament. Iranians elected a total of 18 women -- or 17 according to the hard-liners -- to represent them. This is the highest number in the history of the Islamic Republic of Iran, breaking the record of 14 in a previous reformist parliament and double the number of female members in the outgoing conservative parliament. Fourteen women were elected in the first round in February and four others were just elected in the runoff. Most of these women were on the List of Hope and the rest ran as independent. No hard-line female candidates were able to win. That includes those from the outgoing parliament who were all eliminated by the voters.

Though exciting to see the increase in women in prominent government roles, the change has not been without controversy. One reformist woman who won in the first round, 30-year-old Minoo Khaleghi from Isfahan, was later eliminated by the conservative Guardian Council, the group whose purpose is to confirm or deny eligibility of candidates before elections. But the reformist camp, together with the moderate administration, is standing up to the conservatives, fighting to keep her in the parliament. President Rouhani's parliamentary aide recently rejected her disqualification and announced that from the president and administration's viewpoint, the new parliament has 18 female members. He congratulated these 18 women, adding that this is not enough and if not half the parliament, at least one-third of the next parliament should be female.

"These women are very different from the previous parliament's female members," a 30-year-old female engineer from Tehran who lives in the U.S. and wishes to remain anonymous for security reasons, told me. "These are respectful women who have worked hard to get to this level. A few of them are very young, just about my age. That is a success for the entire society, and I hope they will make women's issues among their priorities and bring real change." 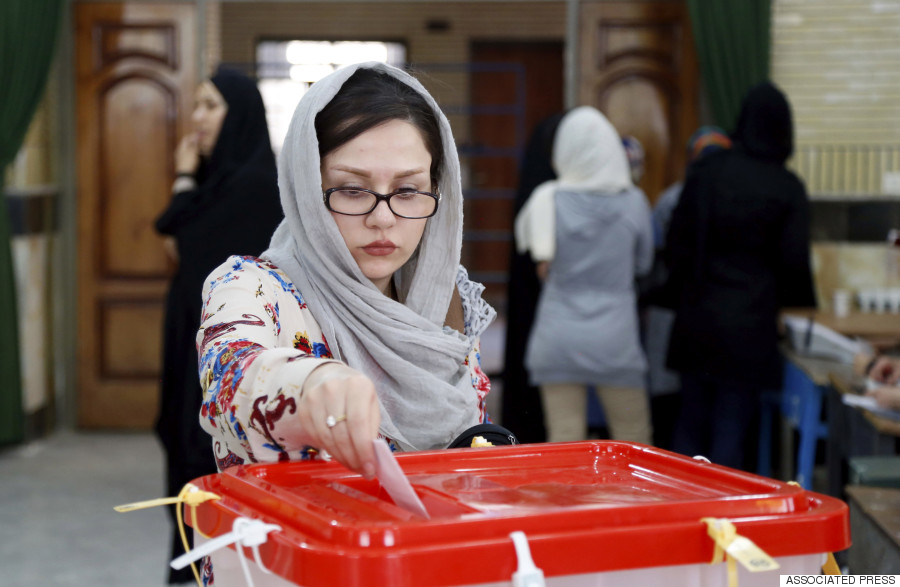 An Iranian woman casts her ballot for the parliamentary runoff elections in a polling station about 12 miles west of Tehran, Iran. (AP Photo, File)

There were only 16 clerics elected to the new parliament, less clerics than all nine parliaments of the Islamic Republic. Since the 1979 revolution, clerics have played a central role in Iranian politics and governance. But that has changed over time, at least in the elected sections of the government. There were 164 clerics in the first parliament, including current leader Ali Khamenei, former President Akbar Rafsanjani and former head of parliament Ali Akbar Nategh Nouri. That number was reduced to 153 clerics in the second parliament, which included current President Hassan Rouhani and 2009 presidential candidate Mehdi Karroubi, who challenged the election results and has since been put under house arrest. The number of clerics in parliament kept shrinking and went down to 85, then 67, 53, 44 and finally 27 clerics in the 9th parliament. Now with only 16 clerics, the Majlis will start its second decade with more women than clerics for the first time. This symbolizes an important shift in the political path of Iranian society, transitioning from the traditional and religious starting point after the 1979 revolution towards more modern and technocratic governance.

"Unfortunately people's view of clerics has diminished over the years, especially compared to the first decade of the Islamic Republic," the son of a prominent Shia cleric in the religious city of Qom who wants to remain anonymous for his safety, told me in response to the election. "Obviously that is because of the poor track record of the clerics themselves," he added. 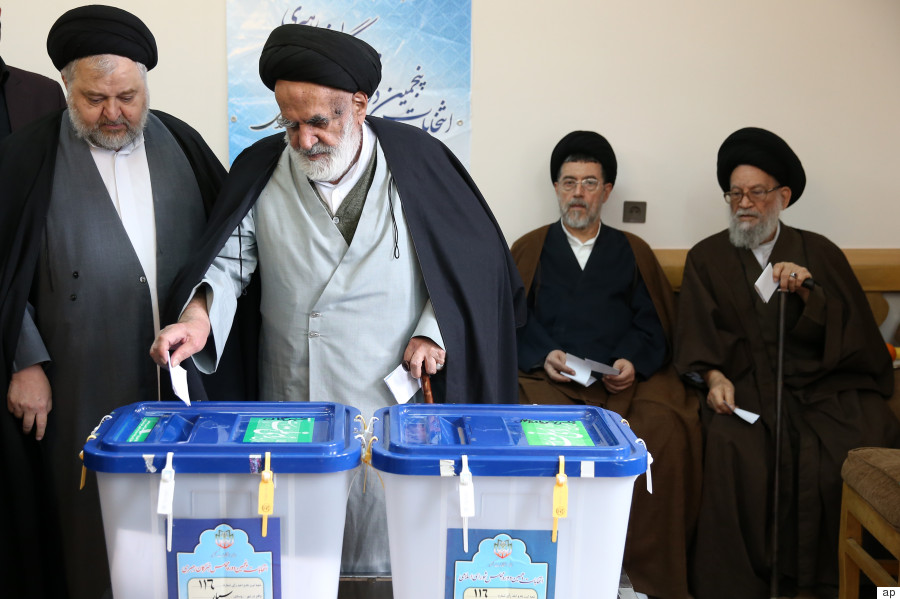 Iranian clergymen vote in the parliamentary and Experts Assembly elections at a polling station in Qom. (AP Photo/Ebrahim Noroozi)

The changes that these elections bring to Iran are especially significant considering the high levels of friction that have existed between the current parliament and President Rouhani. Since coming to power, the Rouhani administration has faced many challenges to its moderate policies, both domestic and international, as a result of the governing body. From opposing the nuclear negotiations to disapproving and impeaching ministers, the legislature made it increasingly difficult for Rouhani to fully realize his moderate political agenda -- until now.

The next step is to choose the speaker of the new parliament, which has historically been the top winner of the majority fraction. In this case, that would be Mohammad Reza Aref, a reformist candidate who served as the vice-president under President Mohammad Khatami. With 1.6 million votes from Tehran, he became the top winner in the country who will lead the majority fraction and most likely the entire parliament.

The new Majlis -- which starts work at the end of this month -- will be more in tune with the progressive policies of President Rouhani and his cabinet.

Aref's popularity comes from the 2013 presidential election, when he ran as the only reformist candidate and was later convinced by President Khatami to drop out in favor of Rouhani. His endorsement rallied young and progressive voters behind Rouhani who won in a landslide. Aref, who made an unprecedented political sacrifice for a bigger cause, became a national hero.

The new Majlis -- which starts work at the end of this month -- will be more in tune with the progressive policies of President Rouhani and his cabinet. Rouhani has had a difficult time fulfilling his campaign promises to the voters in the past three years. He has been going head to head with conservative elements in the Iranian political structure, especially the parliament. Hard-line MPs have been very vocal in criticizing the nuclear negotiations and Iran's negotiating diplomats, for example Mehdi Kouchakzadeh reportedly called Foreign Minister Zarif a "traitor" in this famous argument caught on camera. Kouchakzadeh did not win enough votes in these elections and his fate symbolized a strong message sent from the voters to the hard-liners -- people want change. 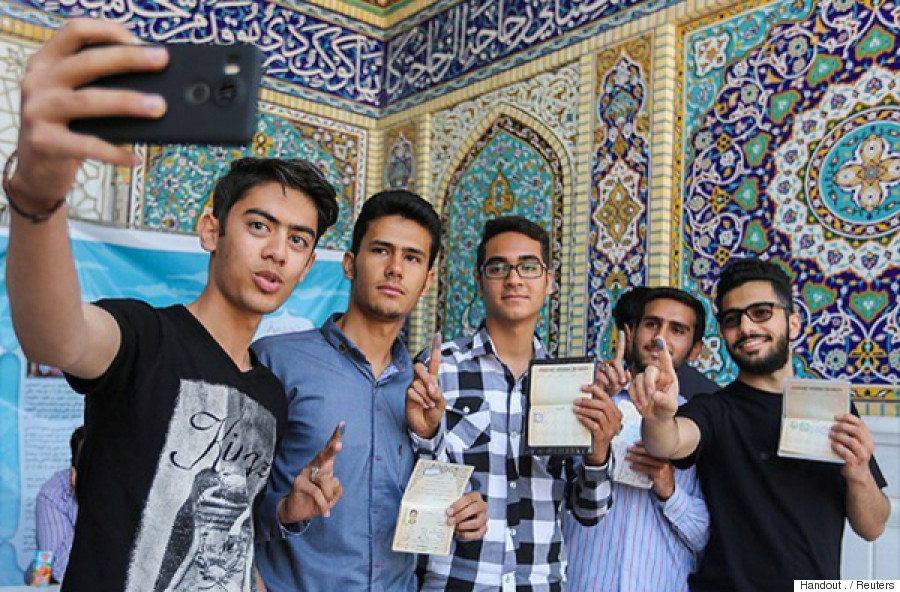 Iranians take a selfie after voting in a second round of parliamentary elections, in Shiraz, Iran on April 29, 2016. (Farsnews.com/Handout via REUTERS)

Why These Elections Were Notable

What do these elections mean and why do these results matter? Should the West take note of the makeover and watch to see where it goes next?

Jamali, the reformist campaign manager, said the focus should now be on Rouhani and what kind of momentum he is able to keep following these elections.

"Now Rouhani has one year to make real change in domestic politics," he said. "He must take bigger risks and really transform the economy."

It's about time, many Iranians say, that Rouhani takes it up a notch.

Jamali's views are not unlike those of many other reformists scattered across the country. Rouhani has a chance to impress, and it's important that he engages effectively. The positives and negatives are huge, but it's about time, many Iranians say, that Rouhani takes it up a notch.

The new parliament will give Rouhani a much needed boost in the last year of his first term. He has been known throughout his political career to be a moderate and a pragmatist. But people have been waiting long to see this and his time is not unlimited. It is now up to him to take full advantage of this new opportunity before he gears up for re-election in 2017.