By Parisa Hafezi and Zahra Hosseinian

Iranian leaders are looking for a high turnout to repair an acute crisis of legitimacy caused by Ahmadinejad's re-election in 2009 when widespread accusations of fraud plunged the Islamic Republic into the worst unrest of its history.

Iran also faces economic turmoil compounded by Western sanctions over a nuclear programme that has prompted threats of military action by Israel, whose leader meets U.S. President Barack Obama in the White House on Monday.

"Whenever there has been more enmity towards Iran, the importance of the elections has been greater," Khamenei said after casting his vote.

"The arrogant powers are bullying us to maintain their prestige. A high turnout will be better for our nation ... and for preserving security."

The poll will have scant impact on Iran's foreign or nuclear policies, in which Khamenei already has the final say, but it could strengthen the Supreme Leader's hand before next year's presidential election. Ahmadinejad cannot run for a third term.

Iranians may be preoccupied with sharply rising prices and jobs, but it is Iran's supposed nuclear ambitions that worry the outside world. Western sanctions over the nuclear programme have hit imports, driving prices up and squeezing ordinary Iranians.

Just days away from the talks between Obama and Israeli Prime Minister Benjamin Netanyahu, their aides were scrambling to bridge differences over what Washington fears could be an Israeli attack on Iran's nuclear sites.

Netanyahu will press Obama, who is facing a presidential election campaign, to stress the nuclear "red lines" that Iran must not cross, Israeli officials say.

The vote in Iran is only a limited test of political opinion, with leading reformist groups staying out of what has become a contest between the Khamenei and Ahmadinejad camps.

The two main opposition leaders, Mirhossein Mousavi and Mehdi Karoubi, defeated in the 2009 presidential vote, have been under house arrest for more than a year.

No independent observers are on hand to monitor the voting or check the turnout figures that officials will announce.

Polls were quiet in affluent northern Tehran, but queues formed in other parts of the capital and provincial cities.

"I am here to support my establishment against the enemies' plot by voting," said Mahboubeh Esmaili, 28, holding her baby outside the Hoseiniyeh Ershad polling centre in central Tehran, where around 50 people were waiting to vote.

Khamenei has told Iranians that their vote would be a "slap in the face for arrogant powers" such as the United States.

The two main groups competing for parliament's 290 seats are the United Front of Principlists, which includes Khamenei loyalists, and the Resistance Front that backs Ahmadinejad.

The president, a blacksmith's son, has long appealed to Iran's rural poor with his humble image and cash handouts from state funds, but spiralling prices have dented his popularity.

Energy and food imports have been hit by sanctions aimed at forcing Iran to halt sensitive nuclear work that the West suspects is a cover for a drive to build atomic bombs. Tehran says it has only peaceful aims, such as generating electricity.

Prices of staple goods, many of them imported, have soared because the Iranian rial's value has sunk as U.S. and European Union sanctions on the financial and oil sectors begin to bite.

Ahmadinejad's critics accuse him of making things worse for low-income Iranians, saying his decision to replace food and fuel subsidies with direct monthly payments since 2010 has fuelled inflation, officially running at around 21 percent.

The president enjoyed solid support from Khamenei in the months of "Green Movement" protests that followed the 2009 election, but the two men have fallen out badly since then.

For Khamenei, the parliamentary election could reinforce his grip on power against a president seen as trying to undermine the clergy's central role in Iran's complex political hierarchy.

Ahmadinejad cannot stand for a third term next year, but some Iranian media reports said he hoped to secure the election of his chief of staff, Esfandiar Rahim-Mashaie, to succeed him.

Powerful establishment groups, including senior clerics, the elite Revolutionary Guards and bazaar merchants, have formed an alliance to back Khamenei loyalists in the parliamentary poll.

Not everyone can run in Iranian elections. The hardline Guardian Council, made up of six clerics and six jurists who vet candidates, approved more than 3,400 out of 5,382 applicants.

Some politicians said the council barred many established Ahmadinejad supporters, forcing him to pick political unknowns.

The rift between Khamenei and Ahmadinejad broke into the open in April 2011 when the Supreme Leader forced the president to reinstate an intelligence minister he had insisted on firing.

Khamenei has kept up the pressure in recent months. Dozens of Ahmadinejad allies have been detained or sacked for links to the "deviant current".

Most strikingly, the president's media adviser, Ali Akbar Javanfekr, has received a one-year jail term for insulting Khamenei, which an appeal court upheld on Wednesday.

The authorities have suggested that malign foreign hands are trying to disrupt the election.

"So far 10 saboteurs who came to Tehran from outside the country, have been arrested and are now in detention," Mohammad Taqi Baqeri, a Tehran election official was quoted as saying by the semi-official Fars news agency. He gave no details. (Additional reporting by Hashem Kalantari in Tehran, Marcus George in Dubai and Matt Spetalnick in Washington; Writing by Alistair Lyon, editing by Peter Millership) 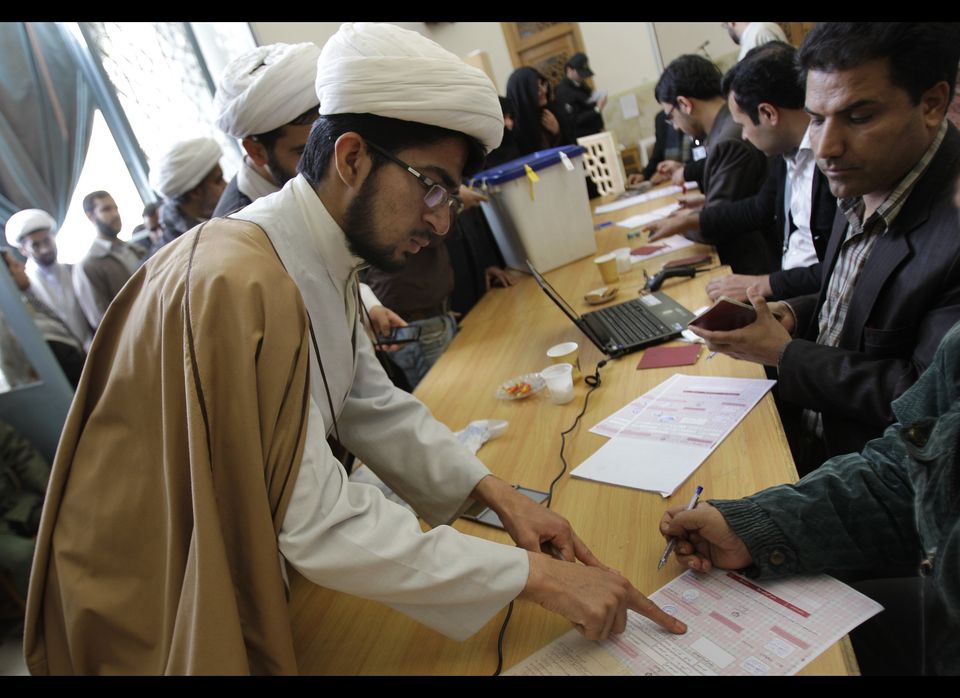 1 / 8
An Iranian fingerprints his ballot for the parliamentary elections at Masoumeh shrine in the city of Qom, 78 miles (125 kilometers) south of the Tehran, Iran, Friday, March 2, 2012. The balloting for the 290-member parliament is the first major voting since the disputed re-election of President Mahmoud Ahmadinejad in June 2009 and the mass protests and crackdowns that followed.(AP Photo/Kamran Jebreili)
AP