The quakes, with magnitudes of 6.4 and 6.3, struck East Azerbaijan province on Saturday afternoon, flattening villages and injuring thousands of people around the towns of Ahar, Varzaghan, and Harees, near the provincial capital Tabriz.

A rescue team using sniffer dogs had pulled out the body of a young woman in the village of Sorkhgav, Fars news agency reported on Tuesday, and was close to finding others.

However, officials dismissed the idea that the number of fatalities could rise significantly, saying the eventual figure may in fact be lower than current estimates.

"Many figures are based on speculation and have not been documented," Behram Samadi Rad, a provincial coroner, said. "We cannot give a precise figure for the number of dead but we believe it will be under 300."

State TV said two people had been found alive under the rubble in a village near the city of Varzaghan on Tuesday.

"They are both in good condition," the report said.

"I truly feel terrible for the people of East Azerbaijan. I want to do what I can to help them. The most important thing is to donate blood because of the shortage," he said.

The Iranian Red Crescent Society said it has provided temporary shelter to around 50,000 people and that the priority was to prevent the spread of illness.

State television has shown extensive footage of airdrops and of officials handing out food rations and tents, after the media was accused of ignoring the national disaster and continuing to broadcast normal schedules.

After visiting the afflicted area on Monday, Vice-President Mohammad Reza Rahimi announced emergency funds for the relief effort and appeared to indicate the government had not reacted quickly enough.

"In these conditions, any criticism the people have of us is acceptable and we must all work as hard as possible for their sake," Mehr news agency reported him as saying.

Twenty battalions of the armed forces have been deployed to tend to the wounded, distribute relief items and provide heavy machinery to move rubble, Mehr reported.

Iran's government has come under criticism for its response to two earthquakes. President Mahmoud Ahmadinejad's trip to Saudi Arabia exposed him to accusations that he was not showing sufficient empathy with the victims.

Meanwhile, a quake with a magnitude of 5.3 on Tuesday and more than 20 minor aftershocks added to the suffering of many who have lost their homes and loved ones and are now living in makeshift camps.

According to the ISNA news agency, up to 70 percent of residences in Iran are not strong enough to withstand moderate earthquakes, let alone those with a magnitude of 6.0 or more.

"In most towns and villages, if an earthquake struck, between 60 and 70 percent of residential buildings would collapse," said Baitullah Setarian, a housing expert. (Additional reporting by Zahra Hosseinian and Stephanie Nebehay, Editing by Andrew Osborn) 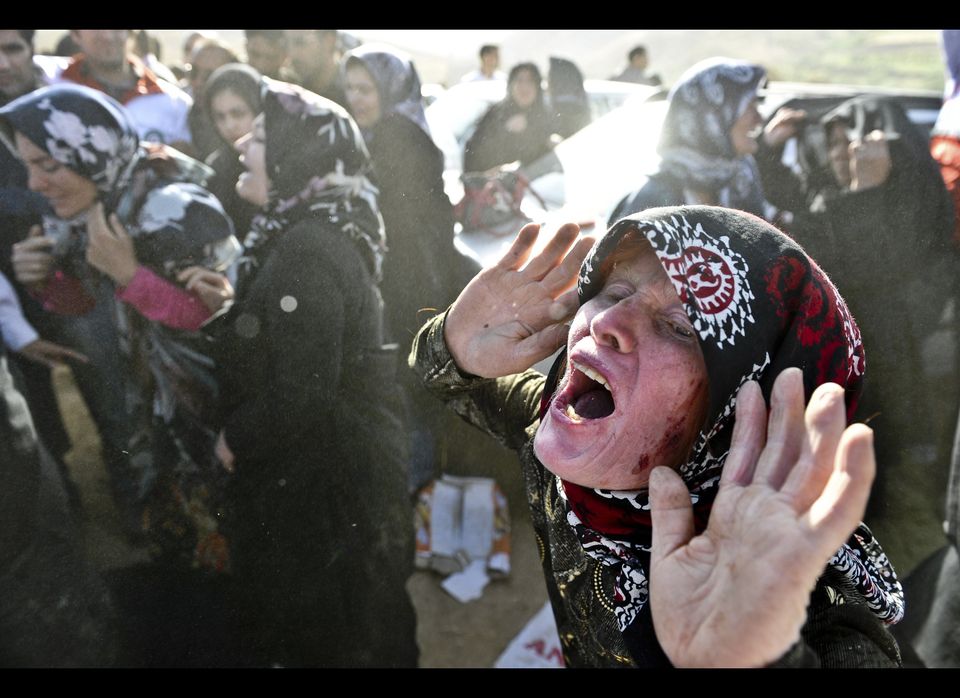 1 / 9
An Iranian woman grieves after her loved ones were killed during Saturday's earthquake at the village of Bajebaj near the city of Varzaqan in northwestern Iran, on Sunday, Aug. 12, 2012. (AP Photo/ISNA, Arash Khamoushi)
AP