Two important nationwide elections were held in Iran on Feb. 26. One was for the Majlis, or parliament, while the second was for the Assembly of Experts, a constitutional body that appoints the supreme leader and can, at least theoretically, fire him. To be sure, the elections were neither democratic nor fair. Thousands of candidates were disqualified from running by the Guardian Council, another constitutional body that vets all candidates for elections. The elections are also not fair because the hard-liners, who control many important national organs, use the nation's resources for their own campaign and propaganda.

The Majlis has 290 seats, five of which are reserved for religious minorities such as Jews, Christians and Zoroastrians. Given that the vast majority of their candidates for the Majlis were disqualified by the Guardian Council, with the excuse that they supported the 2009-2011 Green Movement, the reformists put together a coalition with the supporters of President Hassan Rouhani and moderate conservatives. A similar coalition was formed for the Assembly of Experts' elections that included supporters of former President Akbar Hashemi Rafsanjani, who has allied himself with the moderates and reformists, and called on the people to vote in order to block hard-line candidates. The list became known as the "Rafsanjani list."

The results have been a resounding defeat for the hard-liners. The greater Tehran district, the political heart of the nation, elects 30 representatives to the Majlis, and according to the final results by the Interior Ministry, all the top 30 vote-getters that have been elected belong to the list supported by the reformist-moderate coalition.

The results have been a resounding defeat for the hard-liners.

About a month before the elections, Iranian investigative journalist and human rights advocate Akbar Ganji published an article in which he suggested that people should try to block the election to the assembly of three powerful and reactionary ayatollahs who have always opposed democratic and fair elections. He proposed the acronym "JYM" for the trio, namely, Ahmad Jannati, secretary-general of the Guardian Council, Mohammad Yazdi, former judiciary chief and current chairman of the assembly, and Mohammad Taqi Mesbah Yazdi, the ultra-conservative cleric who is often considered as the spiritual leader of the vigilante groups that attack peaceful gatherings of the opposition. Ganji's proposal quickly gathered steam. His original article, followed by several more, were widely circulated, taken up by the reformists and moderates in Iran and played an important role in organizing people to reject the hard-liner candidates. I also published two articles in which I strongly supported Ganji's suggestion and explained why it will have a positive effect on the elections. Several other Iranian exiles did the same.

The Tehran province elects 16 representatives to the assembly. The coalition of the reformists and moderates, together with Rafsanjani, announced a list of 16 candidates that it supported in which the JYM triangle was absent. Results of the elections indicate that 15 of 16 candidates of the Rafsanjani list have defeated their rivals, with Rafsanjani and Rouhani receiving some of the highest numbers of votes. The only exception to the list is apparently Jannati, who is 16th in the list of top vote-getters. Many credible sources within Iran have reported that Jannati has also been defeated, but the Interior Ministry has not published the true results. There were, it seems, behind-the-scenes maneuverings to manipulate the vote so Jannati can be "elected." Since the votes were counted by the Interior Ministry, which is controlled by President Rouhani, this seemed unlikely, but apparently it was forced to include him as the last person elected from Tehran province.

The call to reject the JYM triangles had deeply angered the hard-liners and Khamenei. He was forced to publicly defend the trio. Many hard-liners also claimed that rejection of the trio had been instigated by the BBC, and dubbed the Rafsanjani list the "British list" that would be voted for only by the supporters and agents of the British government.

Thus, accepting the defeat of the trio will be deeply embarrassing for the hard-liners because the people have seemingly voted for the list of candidates that was supported by Rafsanjani and the reformist-moderate coalition -- a list that had also been declared by the hard-liners as one the BBC, a media entity of a foreign power, was in favor of. 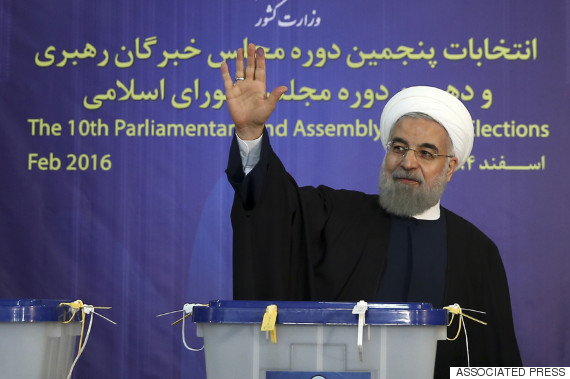 What This Means for Iran's Future

The results will have important implications for Iran and the Middle East, as well as Iran's relations with the West. Domestically, the election of a moderate-reformist Majlis will give the Rouhani administration a freer hand to implement its program and try to open up the political space. Since August 2013, when the Rouhani administration took office, the Majlis hard-liners have repeatedly questioned his cabinet, summoning many of its members to the parliament for interrogation, impeached one minister and tried to impeach several others. A moderate Majlis will strengthen Rouhani's position regarding the release from house arrest of the leaders of the Green Movement, former Prime Minister Mir Hossein Mousavi and his wife Dr. Zahra Rahnavard and former Speaker of the Majlis Mehdi Karroubi.

Rouhani also wants to expand commercial relations with the European Union and create a political and social atmosphere in Iran that is conducive to foreign investments in the country, as well as attracting foreign tourists to Iran that can generate billions of dollars in income for the nation. The hard-liners have opposed this, and have used the Majlis to block Rouhani's attempts.

In the Middle East, and particularly the war in Syria, the Rouhani administration is pursuing a more moderate policy. Specifically, Rouhani and his foreign minister, Mohammad Javad Zarif, have been trying to de-escalate the rising tension with Saudi Arabia. They took a moderate stance in the Vienna conference on peace in Syria, and have apparently convinced Khamenei to withdraw some of Iran's military forces from Syria, as acknowledged last week by U.S. Secretary of State John Kerry. This is in contrast to the harsh rhetoric uttered by the hard-liners against Saudi Arabia, and in particular by the high command of the Revolutionary Guards. Zarif has declared Iran's readiness to negotiate with Saudi Arabia, and it is clear that the war in Syria will not end unless the cessation of hostilities is supported by both Iran and Russia.

The results will have important implications for Iran and the Middle East, as well as Iran's relations with the West.

Likewise, Rouhani and Zarif want to improve relations with the United States. Zarif and Kerry have developed close working relations whose usefulness was recently demonstrated when 10 U.S. sailors were captured by the IRGC navy in the Persian Gulf, after they had strayed into Iran's territorial waters. After a few phone conversations between Kerry and Zarif, the sailors were released less than 24 hours after their arrest. Thus, a more moderate Majlis will be supportive of Rouhani's efforts in the foreign policy arena as well.

In the same manner, the election of a more moderate Assembly of Experts will have positive effects. It is widely believed that the next elected Assembly of Experts will elect Khamenei's successor. Khamenei is 76 years old. Persistent and years-old rumors about his health became more credible when he underwent prostate surgery in 2014. They became even more convincing when in a speech to the IRGC officer corps in September of 2015 Khamenei said, "Iran's enemies are waiting for a time when the nation and system fall asleep, for example in 10 years when I may not be here, to realize their objectives." Thus, the question of Khamenei's successor grows more relevant each year.

Election of a more moderate assembly will influence the selection of the next supreme leader and can possibly block the rise to power of some extremist potential successors, such as Mojtaba Khamenei, the judiciary chief Sadegh Larijani or Tehran Friday prayer imam Ahmad Khatami. A clear path for hope in the future has been opened up by these elections. The hard-liners that have isolated Iran and repressed its people are on the wane.