Iran's hardliners, who had reluctantly taken a back seat after President Rouhani's election, are starting to claw their way back to power. On March 10, a conservative ayatollah surprised observers and came out on top in an election for the chairmanship of the Assembly of Experts, a powerful supervisory body of 80 or so theologians that has nominal control over the supreme leader, Ayatollah Ali Khamenei. Mohammad Yazdi, a conservative and staunch supporter of Khamenei, beat the moderates' candidate, former two-term president Ali Akbar Hashemi Rafsanjani, by nearly twice the votes.

The Assembly has two major tasks: it appoints the supreme leader, and it has the power to sack him if he is too ill or is no longer qualified to be the supreme leader. Yazdi, 83, is a hardliner, former head of the judiciary and has himself been ill for some time.

Yazdi's election was an unexpected and highly important development, and it should be understood within the context of the power struggle in Iran that has been raging for two decades -- a battle that has an important impact on Iran's regional foreign policy as well as any nuclear deal with the West.

Right from the beginning, the Islamic Republic of Iran has been the scene of a fierce power struggle over political influence, national resources and social dignity. Over time, the hardliners have sought to eliminate reformists and supporters of the Green Movement from positions of political power through lies, accusations, assassinations, repression and imprisonment.

At the same time though, two important aspects of a representative democracy -- participation and competition in the political process -- have always existed in the Islamic Republic. The regime craves acceptance by a high percentage of eligible voters in the national elections as evidence of its legitimacy, and has often emphasized that its popularity is higher than that of leaders in Western liberal democracies. Iran has also used large turnouts at events on special days, such as the anniversary of the victory of the 1979 revolution, as further evidence of its legitimacy.

But the liberal opposition and minorities are severely limited from participating in national elections, for either president or the Majles (parliament). Atheists and people of the Baha'i faith are forcefully discouraged and sometimes barred from running in elections, even if they believe in the revolution and its leader, Ayatollah Ruhollah Khomeini, the constitution and the current supreme leader, Ayatollah Ali Khamenei. If a candidate refuses to be absolutely obedient to Khamenei and his views, he or she is prevented from running by the Guardian Council, a constitutional body that vets all candidates for almost all elections in the country. In effect, the entire population has been divided into khodi (us) and gheir-e khodi (them).

Only the khodis -- those who are blindly obedient to Khamenei -- can run in elections. Despite this limitation, elections are still highly competitive; their outcomes are unpredictable and there is widespread criticism of, and revelations about, the candidates.

Eliminating the Reformists and the Green Movement

Ever since he was appointed as supreme leader in 1989, Khamenei has been trying to eliminate the reformists -- who began as Islamic leftists in the 1980s -- from the political process. The presidential elections of May 1997, which resulted in the landslide victory for the reformist candidate Mohammad Khatami, shocked Khamenei and his supporters. That was followed, three years later, by the reformists' landslide victory in parliamentary elections, which further terrified the hardliners and the conservatives.

The conservatives took complete control of parliament in 2005. Khamenei then prevented former President Rafsanjani and the reformist candidates from winning the presidential election that year, helping Mahmoud Ahmadinejad to get elected instead. He then declared triumphantly that the "revolution train" that had been derailed during the Khatami era had returned to its rightful path, and called the Ahmadinejad administration the "best" Iranian government over the past 100 years. Khamenei also declared that the reformists had created a "dual state" -- the elected part against unelected organs -- but that Ahmadinejad's election had unified the state again.

The fraudulent presidential elections of June 2009 gave rise to the birth of the Green Movement. Khamenei cracked down violently on the movement and put its leaders, former Prime Minister Mir Hossein Mousavi and his wife, Dr. Zahra Rahnavard, and former Speaker of the Majles Mehdi Karroubi, under house arrest. During his run for president in 2013, Hassan Rouhani promised to help get them released.

That mission has now become a national demand, but, so far, Khamenei won't consider it; by not releasing them, he has put himself in a strategic trap. Khatami has also been vocal in urging the supreme leader to release them. In retaliation, Khamenei has moved to limit Khatami's activities. He was already banned from leaving Iran, but a judiciary official recently announced that it is illegal for the mass media to publish Khatami's pictures, quote him by name or report on his activities.

What Khamenei is saying to the nation is that not only will he not release the leaders of the Green Movement from house arrest, but that he will also prevent Khatami from using his influence to help the reformists in the Majles elections next year, the way he did for Rouhani in the 2013 election.

Full elections for the Assembly of Experts will be held next year. These elections are critical, because the Assembly may have to appoint the successor to Khamenei, who is rumored to be ill.

Ahead of the election, the struggle between Khamenei and Rafsanjani and their supporters has intensified. Khamenei and the hardliners are worried about the composition of the next Assembly. They have repeatedly claimed that Rafsanjani and his supporters are trying to take control of the Assembly in order to limit Khamenei's power through a committee that will monitor his performance. Ayatollah Movahedi Kermani, a top cleric, told a recent gathering of conservatives that the members of the current Assembly "cannot do a damned thing" against Khamenei, but that could change under the next Assembly.

The radical conservatives now feel stronger than before. Rafsanjani's son, Mehdi Hashemi, was put on trial late last year, and the verdict may be issued any day now. The day after Yazdi's election as the head of the Assembly, Rafsanjani said that his son is innocent, that the only fair verdict would be finding him innocent, and that if he is convicted, it would be based on a political decision by the top of the political hierarchy (implying, implicitly, Khamenei). The judiciary chief, the conservative Sadegh Larijani who is also an Assembly member, threatened Hashemi Rafsanjani with legal action for what he had stated about his son.

The War on Rouhani

Khamenei and current President Rouhani have fundamental differences. Iran's conservatives and hardliners don't support Rouhani's foreign and domestic policies. They have been attacking him fiercely, hoping that he will not be re-elected in 2017.

The incompetence of the Ahmadinejad administration, coupled with its vast and deep corruption, almost brought Iran's economy, already under the most crippling economic sanctions by the West, to its knees. Iran's economy contracted by about 5.8 percent in 2012. When Ahmadinejad left office in 2013, the rate of inflation was 42 percent, and unemployment was hovering around 13 percent, possibly quite a bit more. The Rouhani administration has brought down the inflation rate to 17 percent annually, and the economy was projected to have grown 1.5 percent growth in 2014. But the recent collapse of oil prices has complicated Rouhani's efforts for improving the economy.

People are not economic experts. They expected the Rouhani administration to improve the economy rapidly. But, since that has not happened, Rouhani's popularity has plummeted. While his approval rating was 59 percent last December, new polls indicate that it now stands at 49 percent, and negative views of him have increased to 30 percent from 28 percent. The same poll also found that if the elections were held now, Ahmadinejad will receive 21 percent of the votes, compared with 27 percent for Rouhani. When the respondents were asked to rate the economic performance of Ahmadinejad and Rouhani on a scale of zero to 20, they were given 13.7 and 13.9, respectively.

A comprehensive nuclear agreement between Iran and P5+1 will greatly affect Rouhani's fate. If the nuclear negotiations fail, Tehran's hardliners will blame Rouhani for the failure and for making major concessions to the West while gaining very little in return. Thus, it would become possible to topple him and his administration and bring to power hardliners such as Saeed Jalili, Iran's chief nuclear negotiator under Ahmadinejad. But if the negotiations succeed, the hardliners will give credit to Khamenei.

If, on the other hand, the nuclear negotiations succeed and economic sanctions are lifted or suspended, the economy will improve, which will help Rouhani, Rafsanjani, their moderate and reformist supporters and the Green Movement. The Iranian people support improvements in the relations between Iran and the West.

Over the past two years, there have been systematic efforts by Khamenei and his supporters to elevate Major General Qasem Soleimani to a national and Shiite hero. He is commander of Iran's Quds Force, the special military forces that operate outside Iran's borders. There are speculations that Khamenei and his supporters may nominate him for the presidency in the 2017 elections.

The power struggle in Iran between the hardliners on one side and moderates, pragmatists and reformists on the other, will not only decide the future of the most important nation in the Middle East, it will also affect the entire region. The West should pay attention to the struggle and support the moderate coalition against the hardliners by reaching a comprehensive nuclear agreement with Iran.

Once Iran is safe from sanctions and a potential military strike, those who do not want their county to become another Iraq or Libya will speak louder against the dictatorial regime, for they will no longer agonize about jeopardizing Iran's existence.

This article was translated by Ali N. Babaei 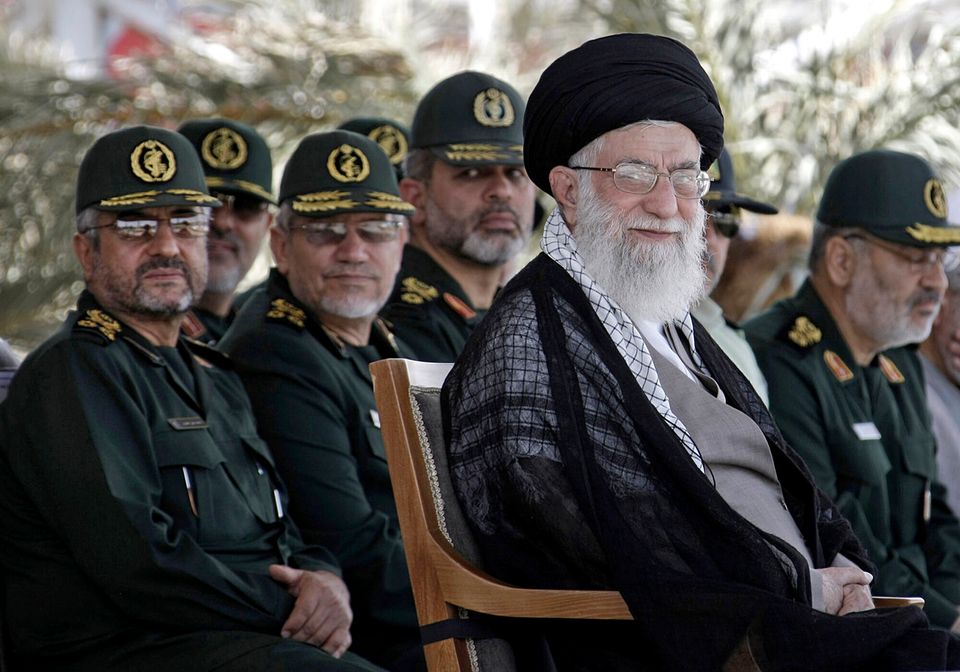 1 / 6
Supreme Leader Ayatollah Ali Khamenei
Wields control over every major decision either directly or through a network of hand-picked loyalists and institutions, including the powerful Revolutionary Guard, the judiciary and intelligence services. <em>In this file photo released by the official website of the Iranian supreme leader's office on Monday, May 27, 2013, supreme leader Ayatollah Ali Khamenei, foreground right, attends a graduation ceremony of a group of Revolutionary Guard members, in Tehran, Iran. (AP Photo/Office of the Supreme Leader, File)</em>
AP