By John Irish and Arshad Mohammed

VIENNA, July 10 (Reuters) - Iran and major powers gave themselves until Monday to reach a nuclear agreement, their third extension in two weeks, as Tehran accused the West of throwing up new stumbling blocks to a deal.

Both sides say there has been progress in two weeks of talks, but British Secretary Philip Hammond called it "painfully slow" and he and his French counterpart, Laurent Fabius, left Vienna saying they would return on Saturday.

Having missed a Friday morning U.S. congressional deadline, U.S. and European Union officials said they were extending sanctions relief for Iran under an interim deal through Monday to provide more time for talks on a final deal.

Iran and six powers - Britain, China, France, Germany, Russia and the United States - are trying to end a more than 12-year dispute over Iran's atomic program by negotiating limits on its nuclear activities in exchange for sanctions relief.

The sides remain divided over issues that include a U.N. arms embargo on Iran which Western powers want to keep in place, access for inspectors to military sites in Iran and answers from Tehran over past activity suspected of military aims.

Iran's foreign minister Mohammad Javad Zarif said a deal was unlikely to be reached on Friday and negotiators would probably spend the weekend in Vienna. He sought to blame the West for the impasse.

"Now, they have excessive demands," he said of the major powers' negotiating position.

Britain's Hammond said ministers would regroup on Saturday to see if they could overcome the remaining hurdles.

"We are making progress, it's painfully slow," he told reporters before leaving Vienna.

Zarif has been holding intense meetings for two weeks with U.S. Secretary of State John Kerry to try to hammer out a deal limiting Iran's nuclear program in return for withdrawing economic sanctions that have crippled the Iranian economy.

An agreement would be the biggest step towards rapprochement between Iran and the West since the 1979 Islamic Revolution.

But the negotiations have become bogged down, with final deadlines extended three times in the past 10 days and diplomats speaking of a shouting match between Kerry and Zarif. 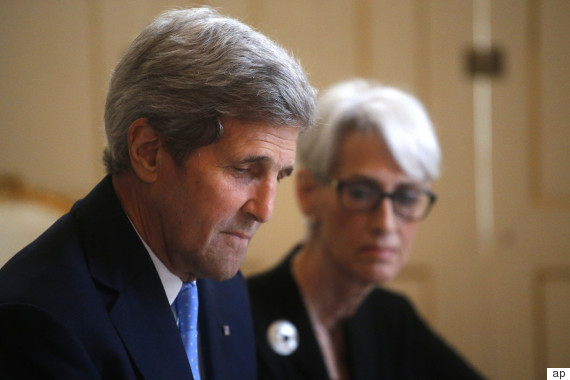 The negotiators missed a Friday morning deadline set by the U.S. Congress for an expedited 30-day review of the deal. Any deal sent to Congress before Sept. 7 would now be subject to a 60 day review period, accounting for lawmakers' summer recess.

U.S. officials had previously expressed concern that the extended review would provide more time for any deal to unravel, but have played down that risk in the last few days as it became increasingly likely that the deadline would not be met.

On Thursday, Kerry suggested Washington's patience was running out: "We can't wait forever," he told reporters. "If the tough decisions don't get made, we are absolutely prepared to call an end to this."

A senior Iranian official speaking on condition of anonymity said the United States and the other powers were shifting their positions and backtracking on an April 2 interim agreement that was meant to lay the ground for a final deal.

Back in Iran, Friday provided a reminder of the depth of more than three decades of enmity between Iran and the West that a deal could help overcome.

Iranians rallied for the last Friday of the fasting month of Ramadan, observed in Iran as "Qods Day" or "Death to Israel day," to show support for Palestinians, protest against Israel and chant slogans against the "Great Satan" United States.

Western countries suspect Iran of seeking the capability to make nuclear weapons. Iran says it has the right to peaceful nuclear technology.

Over the past two years, the nuclear talks have brought about the first intensive direct diplomacy between the United States and Iran since Iranian revolutionaries stormed the U.S. embassy in Tehran in 1979 and held hostages for over a year.

A successful outcome would be a triumph both for U.S. President Barack Obama and Iran's President Hassan Rouhani, a pragmatist elected in 2013 on a pledge to reduce Iran's international isolation. Optimists say a deal could help reshape Middle East alliances at a time when Washington and Tehran face a common foe in the Sunni militant group Islamic State.