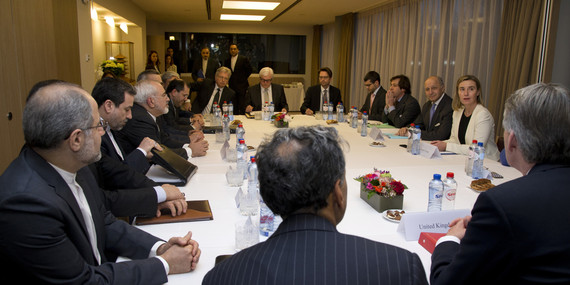 The debate over the wisdom of the Iran Nuclear Deal has most frequently been projected as a divide between the Obama Administration and the Republican-dominated U.S. Congress (including many Democrats) who instead urge a policy of continued sanctions, pressure or even military action as urged by Israeli PM Netanyahu. However, the real leverage in favor of a deal now is that the U.S.' European/NATO allies may no longer be prepared to continue with sanctions and certainly are not inclined toward any military response to Iran. Further, critical members of the UN Security Council as China or Russia certainly would not support continued sanctions but rather would seek to exploit such to drive a further wedge between the U.S., Europe and other evolving allies, such as India or Turkey for example.

The Obama Administration knows the above developing strategic configuration. Further, it has little ability to convince the majority of the U.S. Congress of the wisdom of reaching a deal with Iran instead of some alternative that may include everything from disengagement to military confrontation. However, the Obama team, including U.S. Secretary of State John Kerry who is responsible for the continued talks, know that the U.S. Congress may find it more difficult to reject U.S. Allies, or at least the NATO and EU allies. This may turn into a blame game before U.S. allies, the UN, and U.S. voters.

Israel is seen as the most influential U.S. ally, and the current Israeli Government of PM Netanyahu has taken its opposition directly to the U.S. Congress, going around and some might say above the appeal and word of the U.S. President. Obama may take some satisfaction in implicitly placing the US. .Congress in a choice between U.S.' traditional European/NATO allies or PM Netanyahu. In announcing the general framework or initial understanding, the U.S. President did not shy away from challenging senators from facing this choice. It also may be no coincidence that PM Netanyahu, along with Hamas, is at least at risk in facing an International Criminal Court (ICC) investigation as Palestine was finally admitted to the global Court, (also largely led by European states and U.S. allies although neither Israel, or the U.S. or Iran, China and Russia are members.) (See: Will Zionism and Hamas Ideology Be Criminalized?")

There is also some concern among the Arab states of the Gulf, as much about the rising influence of Tehran in the region as much as a nuclear Iran. Israel's covert development of a nuclear weapon a few decades earlier did not trigger a rapid escalation then. Today may or may not be different if Iran is seen as going nuclear. It should be noted though that Oman and some Gulf Cooperation Council members had encouraged the Iran-U.S. talks even as other members of the GCC were suspicious or weary of growing Tehran influence.

Now, the GCC members face perhaps an even more direct threat from ISIS. Iran may not be a welcome collaborator in fighting ISIS, even if perhaps reluctantly seen as necessary in countering the terror groups military might in Iraq. Nonetheless, an Israeli or U.S. strike upon Iran would add to the chaos, so far ISIS greatest ally and strategic asset. Leaving Iran untethered to any nuclear agreement overtime could only add to the mix of chaos and perhaps the influence of current regimes in Beijing or Moscow. (Read: "Has Putin Been Manipulating Energy Prices?")

Putin perhaps even more so than ISIS presents the most immediate and formidable threat to Europe and the US. Bernard Henri Levy, a historic friend of Bosnia and Herzegovina and a committed Zionist friend of Israel, recently stated on the "Charlie Rose" interview program that Putin and ISIS are the greatest threats to Europe, (a view also shared by former NATO High Commander General Wes Clark.) The U.S. has been seeking from European allies an ever more stringent policy to confront Putin's new imperial ambitions. Division over the "deal" on Iran would also serve to undermine U.S. efforts to bring about a more coordinated response to Putin, whether such persists in Ukraine or arises somewhere in the Balkans, Baltics, Caucuses and/or Central Asia. Iran historically has also seen an imperial Russia as rival, but recently pushed into an alliance of convenience resisting the U.S. It is noteworthy though that at the UN and international forums Tehran conspicuously abstained from supporting Putin and the Kremlin with regards to Ukraine resolutions/statements. (Read: "Construction According to Putin's Model, from Bosnia to Europe?")

The most serious challenge to the nuclear deal may be that it does not at all address the human rights record of the Tehran theocracy or statements challenging the legitimacy of Israel. However, from the perspective of the Obama Administration and most U.S. allies, the nuclear deal is seen as a first step in empowering a more progressive trend with Iran, which is also more consistent with the long history of a more refined pre and Islamic Persia.

It is ironic that the greatest opponents to the "deal" are Iranian hardliners who see an evolution, if not revolution, that will erode their rhetoric and authority, along with PM Netanyahu and his supporters in the US Congress. The Washington lobby group "J-Street" which defines itself as pro-Israel and pro-peace has also maintained an open, even optimistic view of the potential versus risks of a nuclear deal. On the other hand, PM Netanyahu has less credibility in calling for Tehran to recognize Israel after refuting earlier agreements on the "Two State Solution" and the full establishment of a Palestinian State.

Also, contrary to PM Netanyahu's rhetoric, the history of Persia is as friend of the Jewish people, most notable the deliverance by Cyrus the Great from Babylonian enslavement to the long tradition of tolerance and flourishing in Islamic Iran, at least prior to very recent times under the Mullahs. Can it be asked whether PM Netanyahu has stoked confrontation with Iran as means to deflect from his own failures to embrace a genuine peace process with the Palestinians, again an agenda he has shared with Hamas and Palestinian and Arab rejectionists of Israel?

J-Street and other pro-Israel and pro-peace organizations see the current situation unsustainable which has been too frequently stoked by the instigation of conflict, pain, death, fear and mistrust by the extremes on all sides. Israel's own covert nuclear program has also not provided for it to have a direct role in outlining measures that could apply to itself as well as Tehran -- Israel has not accepted IAEA inspection or transparency regarding its own considerably more advanced nuclear program and nuclear weapons developed covertly. (Read: "American Face to New Iran Foreign Policy.")

The Iran nuclear deal continues to appear ever more as "herding of cats" due to the undisciplined demands and conflicting interests that collide with boundless risks and only broad parameters to build upon. The Iran nuclear deal though may be difficult to judge by what it prevents -- a negative is tough to prove. However, if the Obama/Kerry Administration and U.S. allies are to be ultimately vindicated, there must be a fundamental change within Iran, a broader rapprochement that also confronts ISIS and Putin ambitions, mutual recognition and respect as well as peace in the Israel/Palestine conflict and culminating in a nuclear free Middle East -- yes, it's a bit of herding cats, but preferable to a perpetual cycle of fangs, claws and blood.