VIENNA, Oct 2 (Reuters) - Iran already has enough low-enriched uranium for several atomic bombs if refined to a high degree but it may still be a few years away from being able to build a nuclear-armed missile if it decided to go down that path.

Israel's warning last week that Iran will be on the brink of developing a nuclear weapon by mid-2013 seemed to refer to when it could have a sufficient stock of higher-grade uranium to make a quick dash to produce a bomb's worth of weapon-grade material.

But, analysts say, Tehran would need time also for the technologically complicated task of fashioning highly refined uranium gas into a nuclear warhead small enough to fit on a missile - if it opts for such weapons of mass destruction.

"If they haven't worked out all the steps with dummy materials beforehand they will have a lot to do," said a Vienna-based diplomat who is not from one of the six world powers involved in diplomacy over Iran's disputed nuclear activity.

Experts stress that timeline estimates are fraught with uncertainty as it is unclear how advanced the Islamic Republic may be in its suspected nuclear bomb research.

"I still think that we are talking about several years ... before Iran could develop a nuclear weapon and certainly before they could have a deliverable nuclear weapon," said Shannon Kile, head of the Nuclear Weapons Project of the Stockholm International Peace Research Institute, a think-tank.

Iran rejects suspicions of a covert quest for atomic bomb capability. But its refusal to curb nuclear work with both civilian and military applications, and its lack of openness with U.N. inspectors, have drawn tough Western sanctions.

A high-level group of U.S. security experts - including former national security adviser Zbigniew Brzezinski and former Deputy Secretary of State Richard Armitage - estimated that Iran would need between one and four months to produce enough weapons-grade uranium for a single nuclear device.

"Additional time - up to two years, according to conservative estimates - would be required for Iran to build a nuclear warhead that would be reliably deliverable by a missile," they said in a report published last month.

Senior researcher Greg Jones of the U.S.-based Nonproliferation Policy Education Center put forward a much quicker breakout scenario for any bomb bid and suggested a truck rather than a missile could be used for delivery to target.

Iran could refine uranium for a nuclear weapon in 10 weeks and produce the required non-nuclear components in six months or less, he said, adding this could be done simultaneously.

NO BREAKOUT WITH JUST ONE BOMB?

But the IISS argued in a report last year that the weaponisation time must be added to that required to produce the fissile material to calculate when a usable bomb could be made.

Making the actual weapon entails converting uranium gas to metal, designing a nuclear triggering device and the production and fitting of spherical explosive lenses, it said.

The United Nations' International Atomic Energy Agency (IAEA) last year published a report with a trove of intelligence indicating past, and some possibly continuing, research activities in Iran that could be relevant for nuclear weapons.

They included suspected high explosive experiments and possible work on designing a device to produce a burst of neutrons for setting off a fission chain reaction.

"The information indicates that prior to the end of 2003 the activities took place under a structured programme; that some continued after 2003; and that some may still be ongoing," the IAEA said in its latest report on Iran, issued in late August.

Washington still believes that Iran is not on the verge of having a nuclear bomb and that it has not made a decision to pursue one, U.S. officials said in August.

Israel, believed to have the Middle East's only nuclear arsenal, has threatened military action to stop Iran obtaining such weaponry, although Prime Minister Benjamin Netanyahu last week signalled any attack was not on the cards this year.

In a speech at the annual United Nations General Assembly on Thursday, Netanyahu drew a "red line" on a cartoon bomb just below a label in which Iran was 90 percent along the path to having sufficient weapons-grade material.

Experts put that at the point when Iran has amassed enough uranium, purified to a fissile level of 20 percent, that could quickly be enriched further and be used to produce a bomb.

Iran has produced more than 6.8 tonnes of uranium refined up to 5 percent since 2007, an amount experts say could be used for about five nuclear weapons if processed much further.

Worryingly for the West and Israel, some of that material has been refined to 20 percent, representing most of the effort involved in reaching potential bomb material.

According to the latest IAEA report, Iran has produced about 190 kg of this higher-grade uranium, about half of which has been earmarked for conversion into research reactor fuel, leaving a stockpile in August of just over 90 kg.

Traditionally, about 250 kg is estimated to be needed for a bomb, but some believe less would do.

"It is widely known that even a first device can be made with much less," the diplomat in Vienna said. But, "no one breaks out to make one warhead. Estimates vary but most think three to five warheads is a minimum to be a real nuclear power."

An Israeli official briefed on the Netanyahu government's Iran strategy told Reuters: "Once Iran gets its first device, no matter how rudimentary, it's a nuclear power and a nuclear menace. With that said, we have always noted that, from this threshold, it would take Iran another two years or so to make a deployable warhead." (Additional reporting by Dan Williams in Jerusalem; Editing by Mark Heinrich) 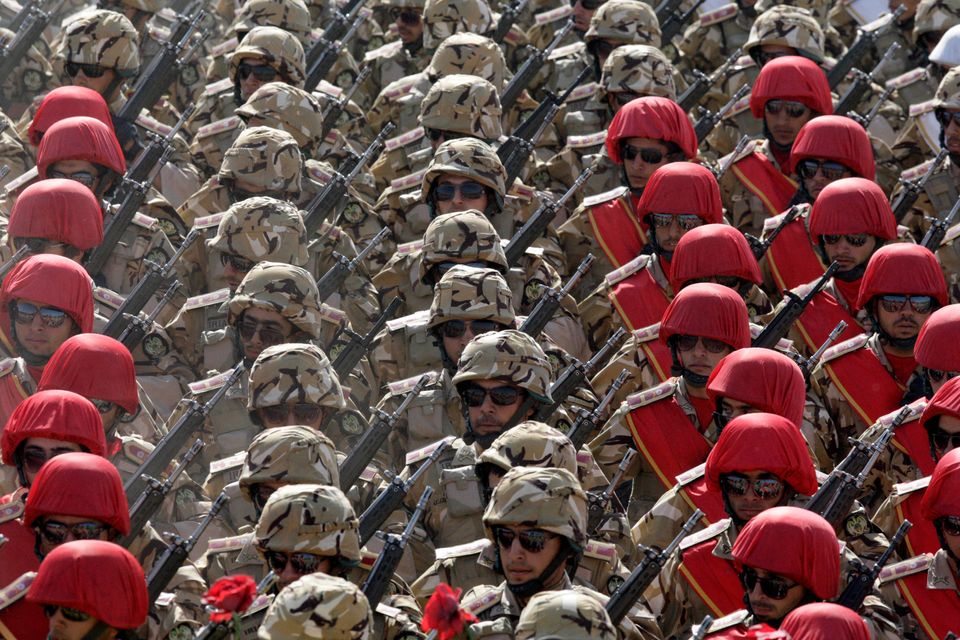 1 / 9
Iranian army troops march in a military parade commemorating the start of the Iraq-Iran war 32 years ago, in front of the mausoleum of the late revolutionary founder Ayatollah Khomeini, just outside Tehran, Iran, Friday, Sept. 21, 2012. (AP Photo/Vahid Salemi)
AP