By Sarah Kaufman and Jody Sieradzki

The number of executions in Iran could surge past a thousand this year, U.N. investigator Ahmed Shaheed said in a report to the General Assembly on Tuesday.

A total of 854 people have already been executed in the Islamic Republic in the first 10 months of 2015, according to the Iran Human Rights Documentation Center (IHRDC), which records "unofficial," "semiofficial" and "official" executions. Urging a swift change of course, Shaheed slammed Iran's justice system as "deeply flawed" and drew attention to issues of human rights violations such as stern restrictions on speech freedoms and lack of access to attorneys, the Associated Press reported.

Read More: 14 Things That Could Get You Executed In Iran

3 executions per day The 854 executions so far this year break down to an average of three people put to death daily. According to Shaheed, Iran has the highest rate of executions per capita in the world. "Some have even received death sentences simply for posting articles on Facebook and other social media sites," he noted.

2,906 executions From 2005 to 2014, a total of at least 2,906 executions were carried out in Iran, according to Amnesty International. The human rights group's data since 2005 includes government-announced executions only, so figures may actually be higher. 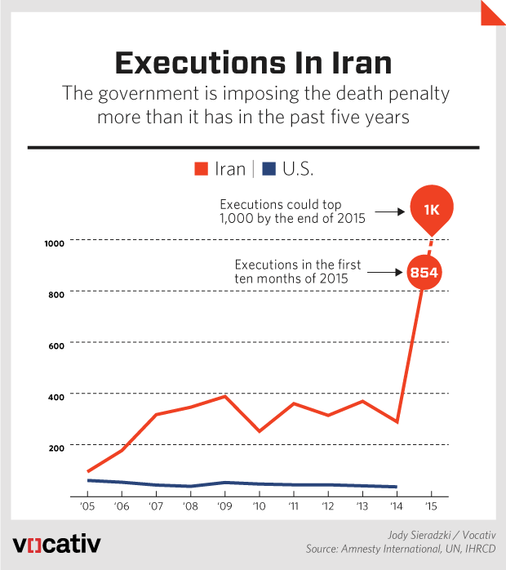 69 percent were for drug-related offenses Throughout the first six months of the year, most executions were for drug-related offenses, according to Shaheed. The country's anti-narcotics law mandates the death sentence for many drug crimes that in the U.S. would be considered relatively minor, such as trafficking more than 30 grams of heroin, morphine or cocaine, Amnesty International says.

694 hangings Nearly 700 people were hanged to death throughout the year's first seven months, Shaheed said in his report. In an interview with the International Business Times, Mahmood Amiry-Moghaddam of Iran Human Rights, a non-profit organization, described this kind of capital punishment as torture and "slow strangulation."

At least 3 were juveniles More than 75 juvenile offenders were among those put to death in the Islamic Republic since 2005, and more than 160 of them are currently on death row, according to Amnesty. At least three were executed so far this year, including a 23 year-old woman accused of killing her 30 year-old husband when she was 17.