On Feb. 26, Iran held its 10th parliamentary election since the 1979 Islamic Revolution and fifth election for its Assembly of Experts, the clerical body that appoints the supreme leader. Members of parliament serve four-year terms, while members of the assembly serve 8-year terms. The elections were relatively competitive; nearly 5,000 candidates vied for 290 seats in parliament and 161 for 88 seats in the Assembly of Experts.

A record-breaking 12,862 individuals had originally signed up to run; 12,067 for the parliament and 795 for the Assembly of Experts. While there is no cost or gathering of signatures required to register as a political candidate in Iran, candidates do have to be vetted by an institution known as the Guardian Council. This time around, after the vetting process was all said and done, 6,372 candidates were deemed qualified. Of those, roughly 5,000 ultimately decided to stay in the race. There were over 55 million eligible voters and 55,000 polling stations were made available across the country for voting.

Ten points stand out from these elections: 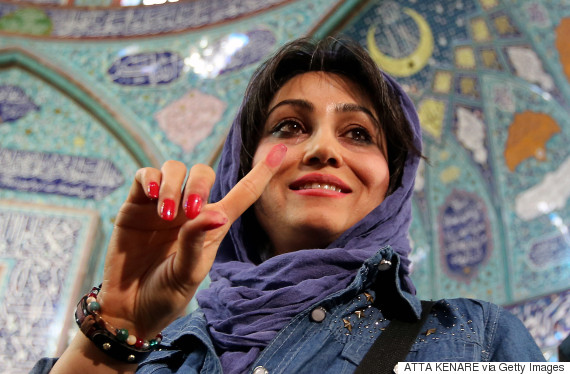 An Iranian woman displays her ink-stained finger after casting her ballot at a polling station in Tehran on Feb. 26. (ATTA KENARE/AFP/Getty Images)

The message of these elections to global powers is that they should approach Iran with respect rather than with threats and drop anti-Iranian rhetoric. The United States Congress and its future president should take policy initiatives that advance beyond the Iran deal and move towards a new vision that reduces pressure and sanctions on Iran. Those Iranians who went to the voting booths have a palpable sense of the indifference of the West to the existence of democracy and elections in Iran. The Iranian people know that any claims by the West to respect public participation in Iran loses its credibility, because they see that Western allies in the region have zero democracy.

Ambassador Seyed Hossein Mousavian is a research scholar at Princeton University and a former spokesman for Iran's nuclear negotiators. His nuclear book, "The Iranian Nuclear Crisis: A Memoir," was published by the Carnegie Endowment for International Peace. His latest book, "Iran and the United States: An Insider's view on the Failed Past and the Road to Peace" was released in May 2014.