BEIRUT, March 6 (Reuters) - The presidential campaign season in Iran this year started with a warning. During a visit to the holy city of Qom in mid-January, the Supreme Leader Ayatollah Ali Khamenei told a packed crowd that both internal and external enemies may try to undermine the vote.

"Those who may offer general advice about the elections - and it could be out of compassion - that the elections should be like this or that, should take care not to further the goal of the enemy," Khamenei said.

That warning was followed by a series of rare public lashings and executions in cities across Iran. And in late January, a dozen journalists were arrested for allegedly being part of a network aiming to destabilize the country.

"The arrests, the beatings and the harsh sentences that have been handed down recently are all related to the election," said Roozbeh Mirebrahimi, an Iran analyst based in New York. "The regime expects another crisis and they have cracked down in advance to reduce the impact."

The last time Iranians voted for president in 2009, the disputed re-election of Mahmoud Ahmadinejad led to massive street protests, put down by force in the most tumultuous period of internal unrest the 34-year-old Islamic Republic has seen.

Supporters of Ahmadinejad's reformist opponents Mirhossein Moussavi and Mehdi Karroubi took to the streets in what they called the "Green Movement". Dozens of people were killed and thousands were arrested.

This time, the authorities are expected to take no chances.

Moussavi and Karroubi have been under house arrest for two years, and no candidate is expected to take up their reformist banner.

Voters will most likely be offered a slate of figures loyal to Khamenei, without independent power bases that could exacerbate divisions in society.

"Khamenei wants the next president to be someone he can control," said Mehdi Khalaji, senior fellow at the Washington Institute for Near East Policy. "He wants people who have no personal backing."

Since the last election, life for ordinary Iranians has become more difficult, with the economy reeling from international sanctions. Prices of basic foodstuffs and fuel have risen as subsidies have been cut, while the oil exports that make up the bulk of Iran's income have fallen dramatically.

Last week, hundreds of farmers in central Isfahan province clashed with security forces because of a government decision to divert water from their area. The clashes showed how economic disgruntlement can quickly escalate into violence as families try to deal with their financial difficulties.

Still, the elections are unlikely to be derailed. Ahmadinejad is barred from running again after two consecutive terms, and his successor is likely to be selected from among a handful of top politicians mostly known for loyalty to Khamenei.

The outgoing president has his own ideas about who should follow him. Although Ahmadinejad was backed by Khamenei after the disputed 2009 elections, they soon had a falling out as the Supreme Leader attempted to keep some of his loyalists in top government posts.

Hardline rivals have accused Ahmadinejad of being in the grip of a "deviant current" of advisers seeking to undermine the role of the clergy.

Some of his allies have been sacked from official posts and others have been jailed. A close Ahmadinejad aide, Ali Akbar Javanfekr, was jailed in September for publishing an article questioning the mandatory hijab, or Islamic dress, for women.

In February, another Ahmadinejad ally, former Tehran chief prosecutor Said Mortazavi, was arrested on corruption charges. He was released a day and a half later but the arrest seemed to be a message to the president and his allies. Mortazavi also faces criminal charges for the death of jailed protesters after the 2009 elections.

At almost every recent public function, Ahmadinejad has taken to saying "long live Spring," a cryptic phrase that many are reading as a call for political change. It is seen as an indirect expression of support for his favoured candidate to succeed him, his senior advisor Esfandiar Rahim Mashaie, whose daughter is married to Ahmadinejad's son.

Ahmadinejad's opponents have accused Mashaie of trying to undermine the power of the clergy, but the president is trying to get his name through the vetting process and onto the ballot.

The powerful and elite Revolutionary Guards, like the Supreme Leader, are deeply wary of Ahmadinejad and show little tolerance for his efforts to influence the vote.

A thinly-veiled opinion piece two weeks ago in "Sobhe Sadeq," the Revolutionary Guard newspaper, suggested Ahmadinejad would likely cause trouble in the lead-up to the elections.

"Those groups who do not have a great chance of winning the elections and seek out their success through a chaotic environment, have an agenda to create unrest," said the article, which did not refer to Ahmadinejad by name but quoted his newly habitual phrase.

"The use of slogans like 'Long live spring,' which is trying to say 'Long live a certain person,'... is an example of the provocative rhetoric."

Whether or not Ahmadinejad succeeds in getting his own candidate onto the ballot, he is using his final months in power to undermine the candidacies of his opponents.

Parliament speaker and former nuclear negotiator Ali Larijani, one of Ahmadinejad's rivals in his first election in 2005, was expected to be a favourite this time around, but Ahmadinejad may have trumped his chances.

Last month, Ahmadinejad created an uproar by publicly accusing Larijani's brother Fazel of corruption during a raucous parliamentary session, a first for the Islamic Republic. Larijani came back swinging with his own set of insults and accusations. Both men walked away tarnished and bruised.

"Larijani's chances were very high for becoming president this year," said Khalaji of the Washington Institute. "Now, with this incident, his image has been damaged."

Still, Larijani is a wily political operator and it would be too soon to write him off. The Larijani family is seen as political royalty: not only does he head up the legislative branch, his brother Sadeq is the head of the judiciary.

Larijani also served in the Iran-Iraq war and was a member of the Revolutionary Guards. Before entering politics, he headed up the state radio and TV broadcaster, the Islamic Republic of Iran Broadcasting, for ten years.

If Larijani does not stand, there are plenty of other loyal figures that Khamenei can choose from to support on the ballot.

At least half a dozen websites have been set up to back the candidacy of Saeed Jalili, a Khamenei loyalist who has served as Larijani's successor as chief nuclear negotiator.

Jalili, 47, walks with a visible limp from a wound he received in the Iran-Iraq war, battlefield experience which could help gain the vital backing of the Revolutionary Guards.

His importance as a key figure in the Iranian government was recently highlighted by two high-profile trips to Syria in the past year, including one last month, where he met with embattled president Bashar al-Assad, Iran's closest Arab ally.

Another important contender is Gholam Ali Hadad Adel, a senior advisor to the Supreme Leader who is also a relative: Hadad Adel's daughter is married to Khamenei's son Mojtaba, a powerful political player who some observers say is being groomed by Khamenei as his successor.

Hadad Adel's close relationship with the Khamenei family could boost his profile.

The 67-year-old has served for 10 years as a member of the Expediency Discernment Council, a body created to resolve disputes between parliament and the clerical Guardian Council. He has held posts at the Ministry of Culture and Islamic Guidance and the Ministry of Education, and has been a member of parliament since 2000, serving as speaker from 2004 until 2008.

One contender who could possibly heal one of the biggest rifts in the establishment is a long-time stalwart of the Islamic Republic, Ali Akbar Velayati, 67, who has served as foreign affairs advisor to the Supreme Leader for 16 years.

A doctor by training, Velayati got his medical degree from Tehran University and later studied infectious diseases at Johns Hopkins University in the United States, according to a biography published by the Hamshari newspaper.

Importantly, he served as foreign minister for 16 years under Khamenei's own presidency and that of Ali Akbar Hashemi Rafsanjani, one of Iran's wealthiest men and for decades one of its most powerful. He has a close relationship to both men.

Rafsanjani, who served as president in the 1990s and lost a campaign to return to power in the run-off against Ahmadinejad in 2005, has been pushed to the sidelines since the 2009 election. His son and daughter publicly supported the Green Movement, earning him stern criticism from hardliners.

In a sign of his official disfavour, crowds at Friday prayers even chanted slogans against him. But if Velayati were to become president, he could help mend the rift between Khamenei and Rafsanjani and act as a stabilizing influence at a time when conservative factions in Iran are jockeying for power.

Another leading candidate and trusted regime figure who officially entered the race for the presidency this week is Mohsen Rezaie, who served as a commander of the Revolutionary Guards for 16 years.

Rezaie is currently the secretary general of the Expediency Discernment Council. He showed his loyalty to Khamenei as a minor candidate in the 2009 election. Like others, he initially disputed Ahmadinejad's contested victory, but in a sign of his fealty to the supreme leader, he quickly dropped his opposition once violent street protests kicked off. That is the sort of loyalty that Khamenei will prize above all. (Editing by Peter Graff) 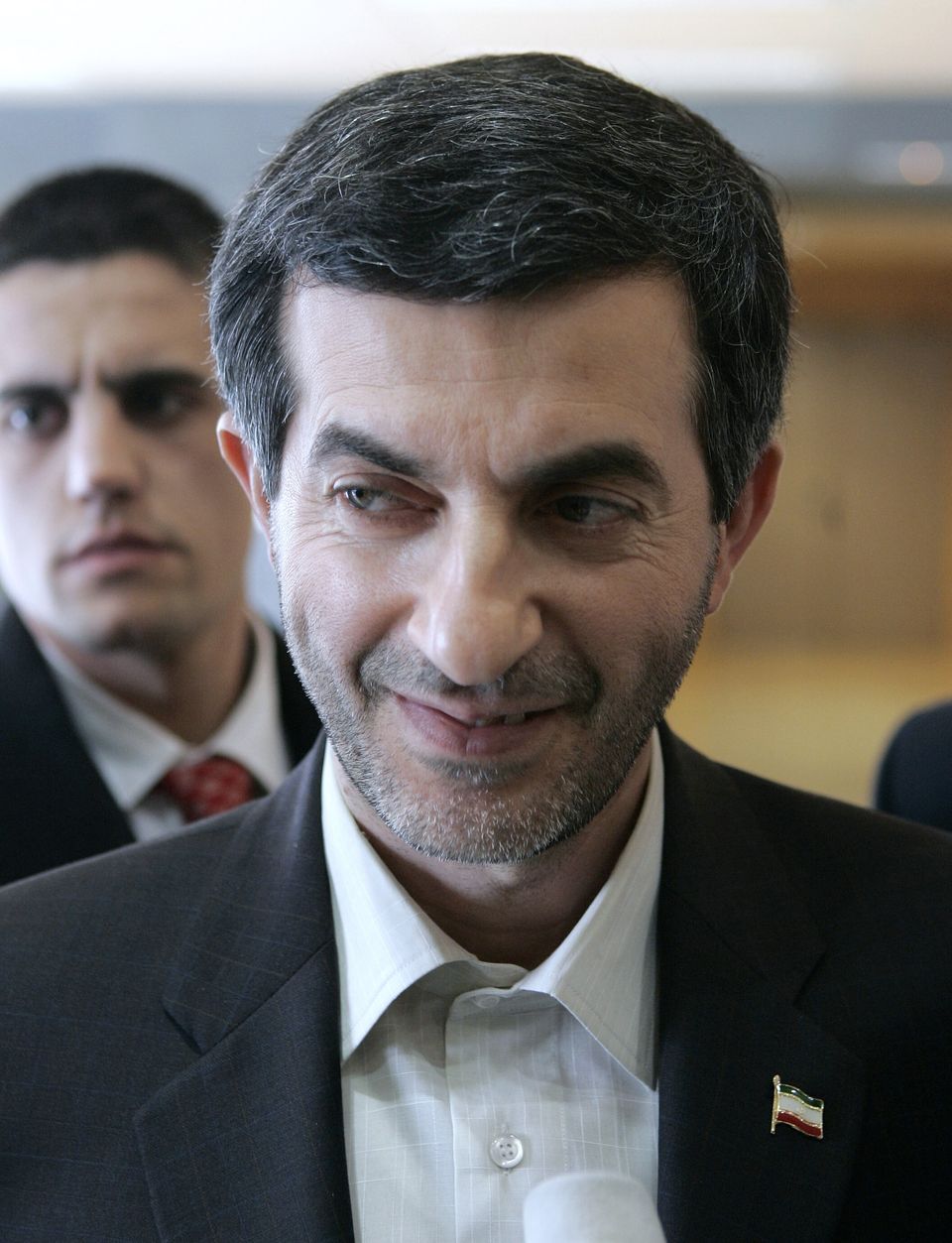