By Marcus George and Yeganeh Torbati

DUBAI, Oct 4 (Reuters) - Shops in Tehran's Grand Bazaar stayed shut and police patrolled the area on Thursday as authorities struggled to restore normalcy a day after security forces clashed with anti-government protesters angered by the collapse of the currency.

Traders from the bazaar, whose merchants supported Iran's 1979 Islamic revolution, told Reuters by telephone that most stores were closed because their owners had stayed away for safety reasons.

On Wednesday, riot police scuffled with demonstrators and arrested money changers in the area during protests triggered by the plunge of the Iranian rial, which has lost about a third of its value against the dollar over the past 10 days.

Pressure on President Mahmoud Ahmadinejad mounted as business associations blamed him for much of the country's economic crisis, which has been fuelled by Western sanctions imposed over Iran's disputed nuclear programme.

But in a sign that the protests still do not threaten Iran's Islamic system of government or Supreme Leader Ayatollah Ali Khamenei, a statement by the associations stressed that "they continue to adhere to the system and the revolution", Mehr said.

The associations agreed that the Grand Bazaar, one of the capital's main shopping areas, would reopen on Saturday in the presence of security forces, Mehr reported.

Ahmadinejad also came under fire from enemies in parliament. The head of parliament's committee for social affairs, Abdulreza Azizi, criticised him for insisting that currency speculators, not his own government's policies, had caused the rial's tumble.

The rial has lost about two-thirds of its value against the dollar since June last year as the sanctions have slashed Iran's earnings from oil exports. The currency's losses have accelerated in the past 10 days after a failed government attempt to stabilise it with a new foreign exchange centre.

The slide has cut living standards, forced Iran to reduce its imports and fuelled job losses in the industrial sector. It has also boosted inflation, which Steve Hanke, an economics professor at Johns Hopkins University in the United States, said had now become hyperinflation.

The government officially puts the annual inflation rate at around 25 percent but Hanke estimated that in the past 10 days, prices in Iran had started rising at a rate which would mean 50-60 percent inflation in a single month.

This is "throwing a monkey-wrench into the stability of the economy. Iran is really getting buffeted around," he said.

One single parent contacted by Reuters in Tehran said she had been unable to buy meat for her two small children for the past two months because of soaring prices. An elderly resident said pharmacies in the city had stopped stocking his German medicine for Alzheimer's disease a few weeks ago. The residents declined to be named because of political sensitivities.

Free-market trading in the rial appears to have almost ground to a halt because of the immense volatility and the government's assault on money changers, traders said.

Iranian media reported that Ahmadinejad had met economic ministers on Wednesday and issued orders on controlling the currency market, but they did not say what those orders were.

Hanke said that if the government was determined to ride out the economic turmoil, it could probably do so for some time.

But the involvement of the bazaar in this week's demonstrations could signal a change of political wind in Tehran. Merchants there and in other major cities were largely absent in the pro-democracy protests that followed Ahmadinejad's disputed re-election in 2009.

"Up to now, the bazaar has been a bulwark of support for the state," said Shaul Bakhash, an Iran historian at George Mason University in the United States.

The protests, he said, "could be signs that the merchant and shopkeeper community have lost patience with the government and its handling of the dollar crisis the country is facing."

Ahmadinejad has been greatly weakened after a public dispute with Khamenei last year and by law cannot run again for president in elections scheduled for June 2013.

If the government can find ways to deploy its financial resources more effectively, it has a good chance of stabilising and even strengthening the rial, some analysts believe.

PHOTO GALLERY
The Collapse Of The Iranian Rial 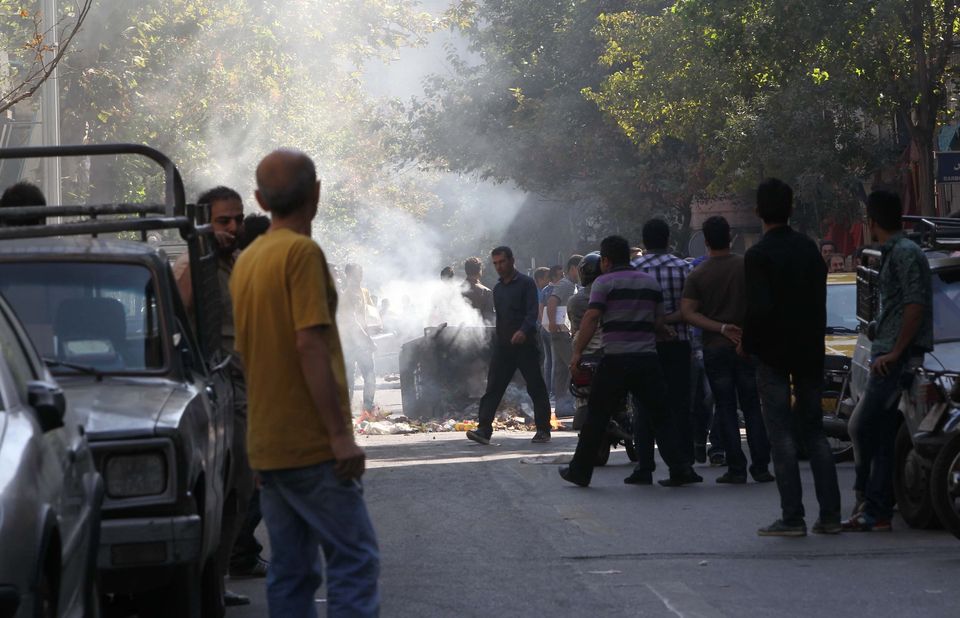 1 / 8
Iranian protesters gather next to a garbage container which is set on fire during scuffles with police in central Tehran, near the main bazaar, on October 3, 2012, in the first sign of public unrest over Iran's plunging currency. (AFP/GettyImages)
Getty Images