WASHINGTON -- The U.S. Justice Department is accusing the Iranian government of trying to assassinate Saudi Arabia's ambassador to the United States in a plot that that has been foiled by federal agents. "The United States is committed to holding Iran accountable for its actions," Attorney General Eric Holder said during a news conference.

Charges stemming from the plot were filed in New York by the Justice Department.

The suspects were identified as Manssor Arbabsiar and Gholam Shakuri. According to a criminal complaint, Arbabsiar is a naturalized U.S. citizen and holds a U.S. passport and an Iranian passport.

ABC News reports that the plot would have also involved bombing attacks at the Saudi and Israeli embassies in the nation's capital.

Obama administration officials stressed that while the plot was serious and could have killed many people if successfully executed, the cooperation of an informant helped prevent any explosives from being deployed.

A White House spokesman said that President Obama was first briefed on the plot in June and that stopping it was "a significant achievement by our intelligence and law enforcement agencies."

Justice Department officials said Arbabsiar approached an informant for the U.S. Drug Enforcement Agency in Mexico and inquired about his knowledge of explosives and the possibility of targeting the Saudi embassy in D.C., located in the Foggy Bottom neighborhood, near the John F. Kennedy Center for the Performing Arts and across the street from the Watergate office and residential complex.

Arbabsiar reportedly offered the informant $1.5 million for the death of the ambassador. The criminal complaint mentions that the assassination plot may have targeted the ambassador's favorite D.C. restaurant. The restaurant was not named.

According to the Justice Department, the target of the plot was Saudi Arabia's top diplomat in D.C, Adel Al-Jubeir. Al-Jubeir first came to Washington in 1987, where he worked as part of the Saudi Diplomatic Service. In 2000, he became director of the embassy's information and congressional affairs office and has served in a variety of advisory posts in the kingdom. He became ambassador to Washington in 2007.

The Saudi embassy released the following statement on Tuesday afternoon: "The Royal Embassy of Saudi Arabia would like to express its appreciation to the responsible agencies of the United States government for preventing a criminal act from taking place. The attempted plot is a despicable violation of international norms, standards and conventions and is not in accord with the principles of humanity."

The Iranian government responded to the U.S. accusations that its Quds force, part of Iran's Revolutionary Guard Corps, had been involved in plotting the attacks. According to BBC News, Iran's official Islamic Republic News Agency labeled the U.S. accusations as "a comedy show fabricated by America."

District of Columbia Mayor Vincent Gray had been briefed on the terror plot investigation starting in July and said in a statement that he was "pleased to see the success of today’s operation to keep our city safe. These threats are serious and citizens should know we are taking all appropriate measures to ensure their safety."

Following the news of the foiled plot, employees in the Watergate complex were sent an email from building management about procedures related to threats at the embassy, detailing conditions when employees are supposed to shelter in place and when they're supposed to evacuate. Linda Douglass, a spokeswoman for Atlantic Media, which sits directly across the street from the embassy, told The Huffington Post that the company did not have immediate comment on the terror plot. 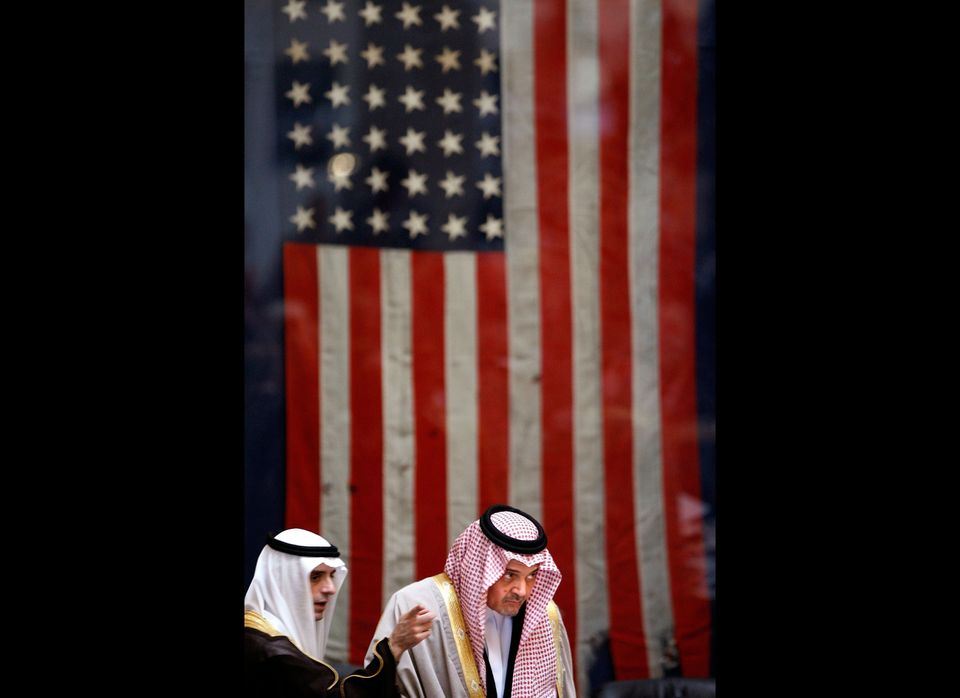 1 / 11
Bush, Middle East Leaders Attend Annapolis Peace Conference
Saudi Arabian ambassador to the United States Adel al-Jubeir (L) talks with Saudi Arabian Foreign Affairs Minister Saud Al-Faisal during the opening session of the Annapolis Conference at the United States Naval Academy November 27, 2007 in Annapolis, Maryland. With diplomats from Syria, Saudi Arabia and many other Middle Eastern countries in attendance, the one-day conference is the Bush administration's first attempt since taking office in 2001 at brokering a peace deal between Israel and the Palestinian people.
Getty