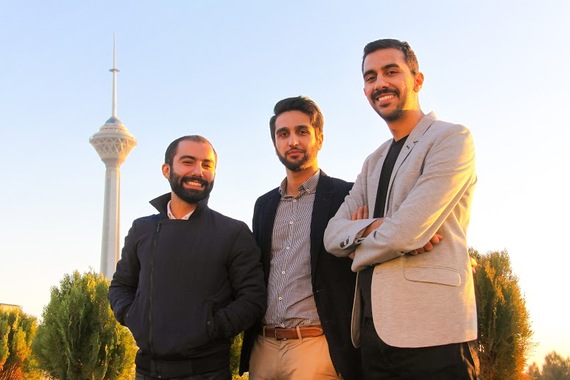 Silicon Valley, Miami, New York, Austin. These are places we typically think of when we think of startup ecosystems. On the international scale, Latin America has been a trending topic for startup news lately as well. But, there is another potential key player we may not be as familiar with.

We have heard the name in the news and on the show Shahs of Sunset. We have heard of the success stories of Iranian-Americans who have trailed successful paths in the fields of tech, engineering, medicine, journalism, business and etc. But, what about Iran today? Many of us may not have associated Iran as the next burgeoning tech and entrepreneurial hub --until now.

I recently had the opportunity to conduct a Skype interview with the founders of TechRasa, an Iranian startup media group located in Tehran. Sitting in front of my laptop across the world in the United States, I meet Iran's millennial start-up ecosystem contributors --Hamed Jafari, MohammadReza Azali and Alireza Jozi. The self-proclaimed startup "insiders" are able to give me a glimpse into a side of Iran that even I as an Iranian-American am not too familiar with.

Below is my interview with the founders of TechRasa.

Q: How would you describe TechRasa? What inspired you and how did you begin?

HJ: In one simple sentence, TechRasa is like the TechCrunch of Iran. We saw the gap of such media in Iran. There are many successful Iranian entrepreneurs in Silicon Valley, but they have lost their connection with their home country throughout the years. The young, talented entrepreneurs in Iran always heard the names of these people on the news but never felt they could actually be in contact with them. TechRasa aims to build a bridge between the two. For now, we're interviewing these people so both sides get to know each other better. Our plan is to organize some events in Iran and gather these people in one place. We hope that in the near future, Iran will become one of the strongest startup hubs in the region.

MA: I had some background in journalism, because I worked for one of the best financial magazines and newspapers in Iran. I tried to gather a team for working on the idea but it wasn't successful until I was introduced to Alireza and Hamed as the co-organizers of Startup Weekend Sharif University.

AJ: Iran is like a black box. You can't see what's going on inside unless you go inside it. We want to break the box and expose the startup activity and entrepreneurs to the world. Iranians like myself who lived outside of Iran don't know that there is a golden opportunity in Iran in tech startups. We want to change that.

Q: You each share an enthusiasm for startup ventures, but you come from different backgrounds. What were you each doing before joining together to form TechRasa?

HJ: I ran my first startup during the first year of college. It was a website called SkateFlee. The website was dedicated to informing young Iranians of extreme sports, especially skateboarding. I met the people at the Iran Entrepreneurship Association (IEA) and really liked what they were doing there. Those people were actually working really hard towards making big changes in Iran's entrepreneurial ecosystem. I decided to join them and help them voluntarily in their programs. I told Alireza about them, and he came on board too. We became part of the team organizing Iran Web and Mobile festival. About two months after, me and Alireza got introduced to MohammadReza through IEA. On June 2015, we officially launched TechRasa in a weekly networking event called Hamfekr.

MA: I loved Mathematics. I'd even been accepted for the final math Olympiad competition, which was between provinces in Iran. I got my bachelor's degree in computer engineering. In those years I worked for Farsi Translation of Harvard Business Review, Donyaye-e-Eghtesad newspaper and Tejarat Farda Magazine. My focus in the magazine was startups, so I interviewed most of the successful startups in the ecosystem. But before Techrasa, I co-organized Startup Weekend at Sharif University of Technology and managed outreach and PR of TedxKish with the help of Hamed and Alireza.

AJ: I started my first startup at the age of 16. I grew up most of my life outside of Iran -in Canada mostly. My family moved to Iran when I entered high school. At the age of 16, I founded Lirz games. I used various channels to sell gaming products and Xbox games. My mother back then was worried about my studies, so that was the reason the startup discontinued. I moved to Vienna, Austria where I was studying software engineering at the University of Technology and after that, business administration at the Vienna University of Business and Economics. My entrepreneur spirit never allowed me to sit down and study. Ultimately, I dropped out from both of my studies. When I came to Iran, I continued to perform as an advisor to two companies and was doing some community building, as I saw a responsibility. Before TechRasa, I was starting work on a startup in the oil and gas sector.

Q: How do you think Iran's tech/startup culture is changing Iran's image in the international community?

HJ: When it comes to building an actual product which users all across the world use, borders don't mean anything. We are trying to make a movement in Iran and help shift the culture towards a more solid and connected world. I highly encourage everyone to visit Iran once and at least see the vibrant activities of the startup ecosystem here.

AJ: The fact that there are entrepreneurs who start startups exactly like any other entrepreneur around the world signals this image that Iran is not the crisis country you see in the news. This has also caused many of the Iranian Diaspora and foreigners active in the startup world to visit Iran and see the action themselves. I see a day where people from all across the region would see Iran as the startup hub in the region. There is no reason why that couldn't happen given our vast talent pool and the good infrastructure Iran has.

Q: You refer to yourselves as the tech "insiders" in Tehran. What makes Iran's tech ecosystem unique? What is the advantage of investing in Iran's startup market?


HJ: Post-sanction Iran is the land of opportunities for investors. Due to the economic sanctions imposed on Iran in the past decades, the country was left behind in the game. But now that the doors are opening, smart investors are keeping their eyes on this market. The growth rate in an emerging country like Iran is two to three times the amount in the US and Europe.

MA: Right now, Iran is a gold mine. The number of startups in each sector is still limited so we don't have that much competition. Right now FinTech is a hot topic here. Many local banks are supporting the entrepreneurs.

AJ: The internet penetration is the highest in the region, and Iran has the largest percentage in terms of higher education in the region. This makes Iran an ideal place to launch a startup. The ecosystem is very young, the market is untouched.

Q: Your team has helped host several local startup events and even a Ted Talk in Kish. Can you tell me a little about the TedxKish experience and any other events you are proud of?


HJ: TEDxKish was really exceptional. We also co-organized SeedStars Tehran with IEA in September. Seedstars World is a startup pitch competition from Switzerland. They go to emerging markets, find the best startups and bring them to Geneva for the final competition. The event had a huge impact for TechRasa and the teams that participated in it. We got featured in one of the most popular weekly magazines of Iran called Hamshahri Javan.

MA: Basically we were handling TEDxKish's media and social media. This TEDx event is one of those events where many non-Iranians have attended. It was a great experience for us to talk to non-Iranians about what is going on in Iran.

Q: What have been some challenges you have faced in forming TechRasa?

Q: The majority of Iran's population is the youth. In a few words, how would you describe the average Iranian millennial?

Q: What's your favorite Iranian tech venture at the moment? Why?

HJ: I love Digikala. Few years ago, I had to search all over the city just to find an item I was looking for. That was just the beginning. Then, I had to make sure the stuff I was buying was actually legit. Today I know if I buy something from Digikala, I can rely on their customer care.

MA: Taskulu. We have many startups at this stage in Iran, but they mostly work in Ecommerce and their landscape is domestic. Taskulu is one of the frontiers in Iran's startup ecosystem that tries to work at the international level, and they have been successful so far. Taskulu is a role based project management platform, which competes with Trello and other project management platforms.

AJ: Digikala. I admire how Digikala has grown in the past years. It's truly an Iranian startup success. I always get a great customer experience with Digikala.

Q: What is your latest project you are working on at TechRasa? What are your hopes for TechRasa in the coming years?

AJ: We are in the planning and research stage for our first international startup event. We are thinking of holding the event in June 2016. We are also in preparation to launch TechRasa Farsi once we raise funds. We are currently in the middle of choosing and talking to investors. The community of TechRasa writers will rise to more than ten in the upcoming months.

When it comes to ambitious Millennials across the world, there is much we can learn from each other. Thank you to TechRasa for sharing your perspective with me.