Despite the Iranian government's keen ability to clamp down on freedoms and just plain fun, Iranians still manage to find ways to have a good time. But rather than have fun publicly, like they did during last summer's water gun fight, they are moving their social activities inside to more private and mobile locations.

During my 3-week trip to Iran in January, I decided to take a trip to the Caspian Sea coast up North to see Ghal'eh Roodkhan, a ancient fortress built by the Seljuk Dynasty. I was excited to learn about the history of the 1000 year-old-castle, but soon learned that I had not signed up for a historical tour but a party. 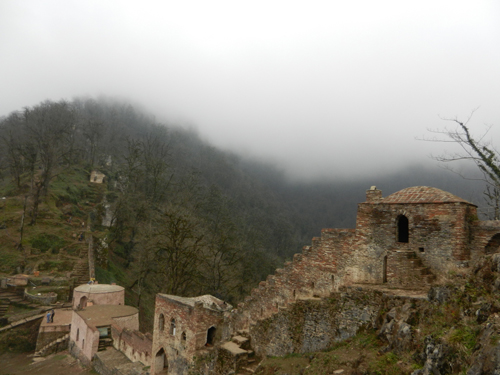 I arrived at the bus stop at 5 am, exhausted from my previous day's skiing in Darband Sar and ready to sleep for the 5-hour ride up north. (Yes, Iran has some pretty nice ski slopes.)

About thirty 20-somethings entered the bus and I tucked myself in a window seat ready to fall asleep. But before I could do so, the tour guide, or "Leader" as they are called in Persian, grabbed the microphone and welcomed us to the "Ghal'eh Roodkhan tour." I took a deep breath and thought, "He'll just introduce himself, welcome us and then I'll sleep."

I was wrong. "Please stand up and tell us your name, your age, and if you have the intention to get married," he said excitedly.

One by one, the bus full of people stood up and followed his request. The bus roared with laughter as the first man stood up and embarrassingly said, "Hi I'm Reza, I'm 25 and I have the intention of getting married."

Next a young woman with beautifully coiffed hair peeking out from beneath her headscarf said, "Hi I'm Mojgan, I'm 26 and I don't have the intention of getting married." When I saw her hair and meticulously applied makeup, I became very self-conscious of my barefaced and disheveled state.

Nevertheless, I introduced myself. "Hi, I'm Michelle, and I have the intention of getting married," I said trying my best to hide my American-accented Persian.

Once the last person finished, I was excited to take my nap. But then the Leader asked, "Who wants to hear some fun music?"

The 2-3 other leaders walked down the aisle and asked everyone to close the curtains of the bus, rendering my window seat useless.

But before the music started he said, "No filming or photography allowed."

Arash's latest pop hit, 'Melody,' came on and the leaders started dancing. They shimmied up and down the aisles encouraging others to join. The girls pretended to be shy but eventually the boys convinced them to start dancing as well. Head scarves came off and the sounds of snapping, clapping and whistling filled the bus.

When we arrived at a toll, the tour leaders deftly stopped the music while the women sat back down and put back on their headscarves. I then realized why they insisted on closing the curtains and forbidding photography. Guys and girls cannot dance together publicly, of course the headscarf is mandatory. Though there are no clubs, discotheques and bars, the demand still exits. The bus tour company had managed to meet the demand by creating a club on wheels.

Once we arrived, I was excited to climb to the top of the fort but then the tour leader announced, "For those of you who don't want to go to the fort, you can just hang out by the bus. Just make sure you are back by 4."

I finally realized what I had signed up for was not a historical tour of the ancient fortress, but rather a chance for young Iranians to breath, relax and let loose.

Unlike many who just hung out by the bus, I did end up going to the top to see the beautiful fortress. 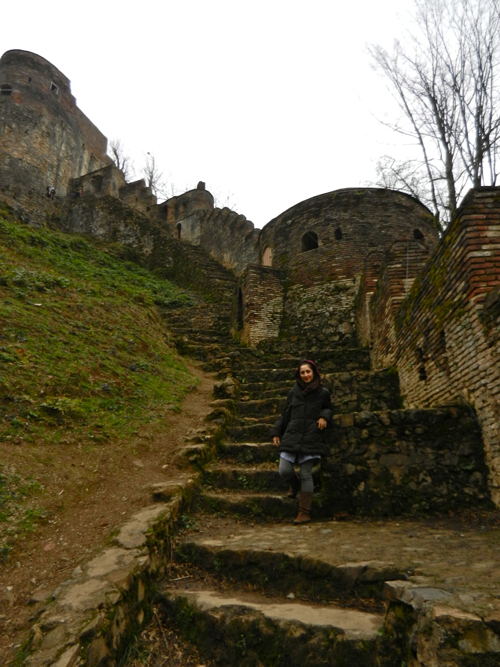 On the bus ride home, I was rejuvenated from my hike and chelo kabob, so I was ready to dance. I asked the tour leader to play some music but he quickly responded and said, "Sorry I can't."

I couldn't believe it, he chooses to play music at 5 am, but now won't play music as 6 pm?

He looked at me and said, "Well, it's Arbaeen.[The 40th day after the martyrdom of Prophey Mohammad's Grandson, Hossein] It's a holy day, so once the sun sets, we must be respectful and can't be seen dancing." So I sat down with my new group of friends and played a wholesome game of cards.

Sanctions have left Iranians isolated and stifled in their own country. But similar to the government's way of maneuvering around sanctions, the Iranian people ingeniously find ways to work around the system and live their lives.

The difficulties of traveling with an Iranian passport coupled with the devaluation of the rial due to sanctions have limited foreign travel for Iran's shrinking middle class. Rather than travel to popular destinations such as Turkey or Thailand, as many Iranians typically do during Iranian New Year, the biggest holiday season, many are staying put. They are forced to travel domestically, showing how sanctions once again have helped the Iranian government rather than hurt it.

As one young Iranian man recently told me, "With the dollar this expensive [due to the sharp currency devaluation caused by the sanctions], it's just not affordable for me to go abroad this year. But who needs to go to Turkey to party when I can do it in the comfort of my own country?"