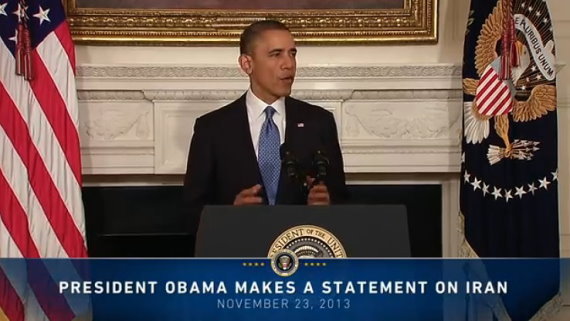 This past week, the Obama Administration pulled off a diplomatic masterpiece -- one upon which, along with Obamacare -- his legacy may ultimately become based. My fellow Republicans fail to appreciate that the framework achieves US interests -- namely protecting the United States and its allies from a nuclear attack -- while at the very same time, being palatable to an Iranian populace and government christened just a decade ago as a member of the "Axis of Evil." Iranians cheered the framework in the streets of Tehran this past week.

Inevitably, the options faced by the US are threefold. The first option, to do nothing and continue sanctions, will result in a more developed and dangerous Iranian nuclear program. The second option, military intervention, would clearly be opposed by the majority of US citizens; poll after poll has shown the wariness of US citizens to support another foreign war. Further, military intervention against Iran could be met hostilely by Russia and have implications in the Western middle-east with co-ally Lebanon. The third option, to attempt an agreement, involves tremendous political risk for the administration if failed, but if achieved, could protect US interests, avoid military invention, end the costly effects of economic sanctions of innocent, repressed Iranian citizens, and potentially, be the first step towards normalized relations with Iran. Improved US-Iranian relations, in turn, could facilitate the US War on Terror.

If anything, the proposed framework is lopsided towards the US and its allies. First, it requires Iran to destroy approximately two-thirds of its existing centrifuges, and retain only its oldest generation centrifuges. Centrifuges are used to enrich uranium into nuclear fuel. By requiring Iran to destroy the I2-I8 generation centrifuges, the deal sets Iran back decades in its ability to quickly enrich uranium and produce weapons grade product. Further, the framework requires that Iran will only be allowed to enrich Uranium to 3.67 percent, far below the 90-plus percent required for nuclear fuel.

Second, the agreement requires Iran to reduce its existing stockpile of enriched Uranium from nearly 10,000 kilograms to 300 kilograms -- a 97 percent reduction, and the destruction of decades of work and billions in value.

The aforementioned will prevent Iran, if enforced, from building a nuclear weapon for at least a decade. If Iran, a few years out, decided to ignore the agreement, the original concessions would lengthen the time necessary for Iran to develop a nuclear weapon from two or three months to a year or more.

The real reason why this framework is a masterpiece is two-fold: first, it was done in such a manner as to make it politically "saleble" in Iran and second, it IS enforceable. To the first point, the US was wise to allow all three nuclear facilities -- Arak, Natanz, and Fordow -- to remain open in some capacity. The Natanz plant and Arak plants will only be permitted to make energy-grade, not weapon's grade, Uranium and Plutonium. Fordow will remain open in limited capacity for research. Permitting all three facilities to remain open will allow Iranian leaders to spin a "victory" to a less knowledgeable populace.

To the second point, an agreement based upon the framework would be strictly enforceable. Under the framework, sanctions could be snapped back due to any breach. This said, the terming of the final agreement would have to be explicit, so as to limit China and Russia's use of Security Council veto power. The inspections guidelines are, I would argue, among the strongest of any weapons agreement in history. The Iranians would allow continuous inspections and inspections of any suspicious sites, not just a list of pre-determined sites. The later, of course, would need to be caveated in the final agreement to prevent espionage, which could be a sticking point in reaching a definitive agreement.

The Iranian nuclear framework is one which, if anything, is skewed towards US interests, while serving as an outline for a definitive agreement which, at the same time, could be palatable in Iran. It is nothing short of a diplomatic masterpiece. Let's give the Obama Administration its just due.

The full text of the framework is available here.