AUSTIN, TX -- When a reporter asked Vaclav Havel to comment on Iran's post-election crisis, the former Czech president said, "Expressions of solidarity with students and others who are defending human rights are important." Havel spoke from experience: he led the Velvet Revolution that peacefully overthrew a totalitarian regime.

But for Iranians living abroad who wish to express their solidarity with the anti-Ahmadinejad protesters, there's a fine line between support and outside agitation, and they must be careful not to cross it.

"Once in a while someone who is doing the same thing you're doing will get in trouble for it, and it creates an atmosphere of fear. In Iran, we never know who will be handpicked to be an example," explained expat Banafsheh Madaninejad, who these days lives in Austin, Texas. This past weekend she joined thousands of Iranians around the world who bravely signed a Green Scroll petition proclaiming Ahmadinejad is not Iran's president.

All of the international signatures will be sewn together to create what organizers hope will be the world's longest petition. It will be displayed later this month, ideally on or before the inauguration of Iranian president-elect Mahmoud Ahmadinejad. "Plan A" is to hang the scroll from the Eiffel Tower in Paris, France. "Plan B" is to unfurl the petition from atop Toronto's CN Tower, the tallest free-standing structure in North America.

I met Madaninejad, a doctoral student at the University of Texas, last Friday when we both happened to be standing on the Congress Avenue Bridge in Austin, home to America's largest urban bat colony. When a million bats flew out from under the bridge at dusk, the scene resembled an Alfred Hitchcock movie. The bats claimed to be Austin's #1 tourist attraction, but that night almost everyone on the bat bridge was there to support their friends in Iran by signing a bolt of fabric nicknamed the Green Scroll.

The primary goal of the Green Scroll campaign is one from Vaclav Havel's playbook: to reassure the protesters that they are not alone in their struggle. The organizers have taken pains to support rather than agitate. "Not for political reasons, but for the safety of students who will be returning to Iran, we've diluted our protests. We've been careful to stay one step behind the protesters inside Iran. For example, if they introduce a particular slogan today, we will wait until tomorrow to use it. We let them set the agenda," explained Madaninejad.

Cities around the world hosted peaceful Green Scroll gatherings July 9 -12. However, I received this email from an organizer in Bangalore, India, where the process was more dangerous than it was in other communities:

Hi. I am mailing you from India. Here we don't have the government's support. If the Iran consulate finds out, we could be deported to Iran and admitted to prison. What we are doing is circulating the scroll, so we don't have any gathering. I will take a picture of the scroll after everyone has signed. Thank you.

In Dubai, police stopped the Green Scroll petition from circulating among Iranian expats:

"The police came and asked me to stop the signing and the sending of the cloth outside of the UAE because there are still important relations between the UAE and Iran," said Farhad, a 44-year-old Iranian who attended the gathering with his family.

Madaninejad told me the post-election demonstrations in Iran caught expats by surprise. At first there were generational misunderstandings that caused tempers to flare. For example, students were using the flag of the Islamic Republic, while older Iranians preferred a flag from the Shah of Iran's time.

"One of the first things we did in Austin was to have several meetings so the students, the older generation, the lefties, the monarchists, pretty much everyone could come together in one bloc and agree to support a new election, the freeing of political prisoners, and the arrest of people opening fire on the protesters," said Madaninejad. "We're all heartbroken by the violence inflicted upon the demonstrators, but also tremendously proud of their non-violent presence in the streets demanding justice."

Ali Tehrani, the Canadian college professor who spearheaded the Green Scroll movement, told me in a telephone interview today that at least 182 cities around the world participated over the weekend, a number that far exceeded his expectations. Tehrani expects the length of the scroll to measure nearly two kilometers, four times longer than his original estimate.

Organizers had hoped to unfurl the Green Scroll from the Eiffel Tower, but now there are technical and security concerns. They haven't given up, but "Plan C" is to display the scroll at ground level near the Eiffel Tower, between the human rights building and the Wall for Peace on the Champs de Mars near the Seine River in Paris.

Today former Iranian president Rafsanjani called for greater freedom of expression in Iran -- "within the framework of the law" -- and asked for the release from prison of protesters who had been arrested for questioning the outcome of the recent presidential election.

Ali Tehrani just told me the Green Scroll will be unveiled in Paris during a solemn ceremony on Saturday, July 25, at 7 p.m., in solidarity with the Green Wave movement inside Iran. Signed scrolls are still arriving in Paris, where they are quickly being sewn together. So far the scroll is almost two kilometers in length -- making it the longest fabric petition ever -- with signatures gathered from 192 cities around the world. "Plan C" (see 7.16 update) is in the works. Click here for more photos.

Watch live coverage of the Green Scroll ceremony in Paris. 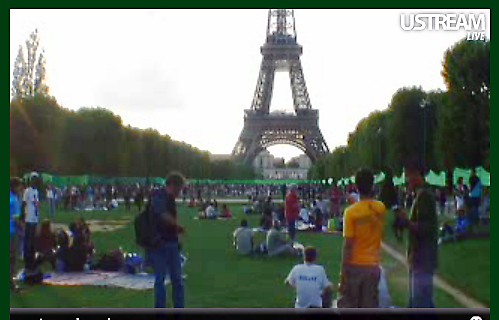 In case you missed live coverage of the ceremony... 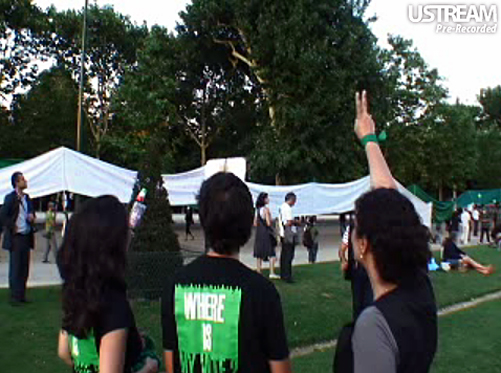 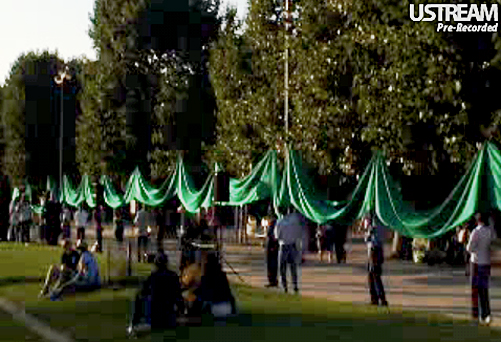 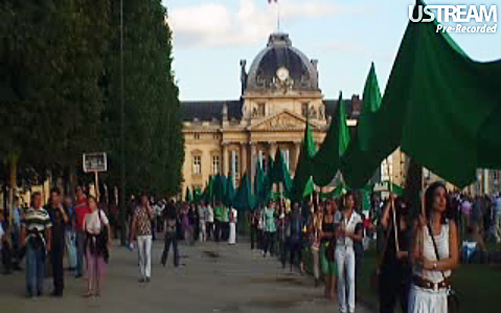 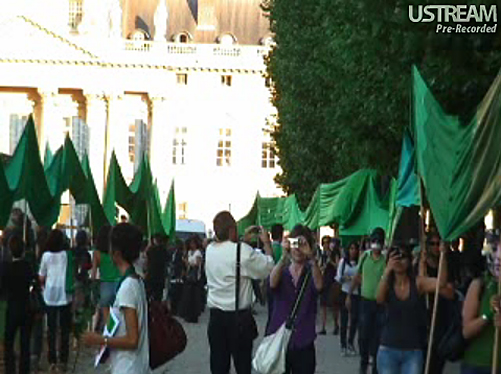 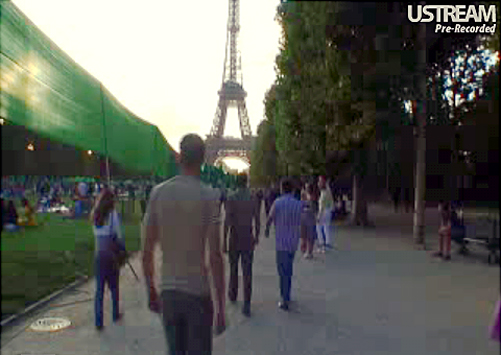 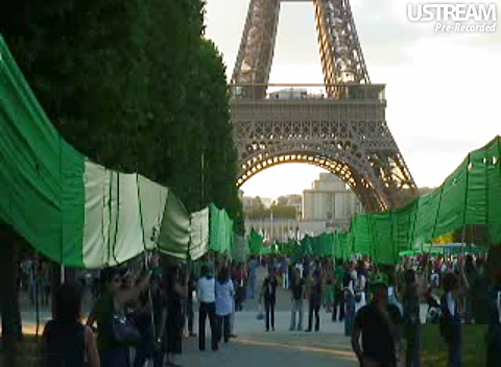 Ali Tehrani told me today that the Green Scroll will "tour the world until the coup government is brought down. The next location may be Vienna, in front of the U.N. building. After a European tour, it will be shipped to North America to be unfurled in Canada and the United States. When the demonstrations are over, we hope the Green Scroll will be displayed in an Iranian museum, or, if that is not safe, somewhere abroad."