The conflict between Iran and Saudi Arabia cannot be reduced to the simplistic trope of "Shiites vs Sunnis." True, sectarian tension is a reality, but the Sunni-Shiite divide is primarily a key tool in the fight for geostrategic, political, religious and economic power in the region. The current crisis is a result of Saudi Arabia's anxieties about the nuclear agreement signed by Tehran and world powers, which brought about a geopolitical upheaval and marked Iran's return to the regional and international scene.

In the '70s, the doctrine developed by Nixon and his national security adviser Henry Kissinger entrusted the security and stability of the Middle East to its pillar allies in the region. According to the "twin pillar" policy, Iran and Saudi Arabia became the local guardian in the Middle East while the US was still mired in Vietnam.

However, this balance was compromised during the 1979 Islamic Revolution, putting an end to security framework the US had established in the region. Washington maintained its alliance with Riyadh, as tension raged in Iran. The Saudi monarchy feared that Tehran might export its revolution to the region at large. To address these fears, Saudi Arabia and the Arab monarchies of the Persian Gulf supported Saddam Hussein --the Sunni Arab-- during the Iran-Iraq war that killed more than a million people (including tens of thousands via chemical weapon attacks). Sunni Arab threats acted like a damn keeping Iran in check.

"From Riyadh's point of view, the current geopolitical reversal gives Iran a dominant role in the region at the expense of Saudi Arabia."

The attacks of September 11, 2001 and the ensuing US invasions of Afghanistan and Iraq caused a state of panic in the Saudi kingdom. Riyadh found itself in trouble with what Vali Nasr called the Shiite revival (The Shia Revival, 2006). Now it was Saudi Arabia that found itself surrounded.

Indeed, the fall of Saddam Hussein tumultuously transferred Sunni power to Iraq's Shiite majority (around 55 percent of the population). In Afghanistan, the Shiites (around 15 percent of the population) seized control after the fall of the Taliban. In 2006, Hezbollah gained some popularity in the Muslim world because of it's anti-Israel stance. Elsewhere in the region (including Saudi Arabia) Shiite populations have demanded more rights.

From Riyadh's point of view, the current geopolitical reversal gives Iran a dominant role in the region at the expense of Saudi Arabia. Following the agreement on nuclear power, Iran will gain momentum, and its sphere of influence will expand. As for Saudi Arabia, its power will decrease. The kingdom seems to be currently trying to stop this re-organization of geopolitical forces, at any cost. 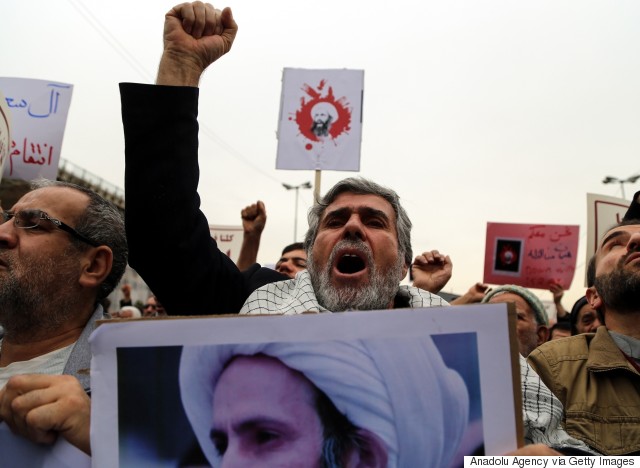 Iranians hold banners and chant slogans against Saudi Arabia during a protest against the execution of prominent Shiite cleric Nimr al-Nimr by Saudi authorities. (Fatemeh Bahrami/Anadolu Agency/Getty Images) Saudi Arabia's geopolitical weight makes it a key player in stabilizing regional crises. However, the country's recent actions, like the beheading of Shiite cleric Ayatollah Nimr al-Nimr, have made it a destabilizing force. This action demonstrated the use of sectarian division (the anti-Shia, anti-Iran card) to rally short-term support among Sunnis in both the Saudi kingdom and elsewhere in the region, around what has been presented as a Shiite threat. This barbaric execution will have the inevitable effect of adding fuel to the fire and provoking large numbers of Shiites in the region.

Moreover, the United States had warned Saudi Arabia of the violent reactions the execution would provoke. Riyadh's desperate attempts to put an end to Iran's power are risky. Severing ties with Iran is a prime example of this desperate bid.

The return, in October, of 464 Iranian pilgrims in coffins following their death during stampedes in Mecca was a shock, but Iran did not break its relations with Riyadh as a response. Yet the unwarranted attack on the Saudi Embassy (which was condemned by the Iranian government, despite its ineffectiveness to prevent it) has served as a pretext for Riyadh to form a coalition with its allies (the United Arab Emirates, Bahrain, Kuwait and Sudan) to try to isolate Iran right at the time when international investors are finally coming around.

After its unsuccessful opposition to the nuclear talks and Iran's involvement in the Syrian crisis, Saudi Arabia is clearly attempting to prevent the normalization of relations between Washington and Tehran. In its calculation, Riyadh is hoping that the United States would side with it and abandon its expansion strategy with Iran.

"The escalation of tension between Tehran and Riyadh is playing into the hands of ultra-conservatives in both countries."

Another example is Saudi Arabia's amateurish, hasty and disastrous invasion of Yemen while the negotiations over the Iranian nuclear were still ongoing. The new Saudi king's irresponsible policies are not sustainable for the region, and they will be increasingly difficult to defend in Washington and in Europe. Germany has already called on Saudi Arabia to mend ties with Iran, and denounced it for its financing of Wahhabi mosques in Europe.

Furthermore, the escalation of tension between Tehran and Riyadh is playing into the hands of ultra-conservatives in both countries.

Finally, the priority of France, the European Union and the United States is to defeat Daesh and to resolve the Syrian crisis. The roadmap is enshrined in the new UN resolution and, now that Saudi Arabia's long-standing opposition to Iran's involvement in Syria has failed, there seems to be an exit from this crisis in sight. However, without a minimum of understanding between Saudi Arabia and Iran, there will be no end to the crisis in Syria, Yemen, Lebanon. All of this will benefit Daesh and other terrorist groups claiming to represent Sunni Islam.

This post was originally published on HuffPost Maghreb. It has been translated into English and edited for clarity.

Political analyst specialized in the Middle East and Iran