A new poll from the Pew Research Center finds a staggering drop in the public awareness about fatalities in Iraq:

Public awareness of the number of American military fatalities in Iraq has declined sharply since last August. Today, just 28% of adults are able to say that approximately 4,000 Americans have died in the Iraq war. As of March 10, the Department of Defense had confirmed the deaths of 3,974 U.S. military personnel in Iraq.

In August 2007, 54% correctly identified the fatality level at that time (about 3,500 deaths). In previous polls going back to the spring of 2004, about half of respondents could correctly estimate the number of U.S. fatalities around the time of the survey.

(Note: the number of U.S. deaths confirmed by the Department of Defense is 3,974. Thirteen U.S. deaths are pending confirmation, for a total of 3,987). 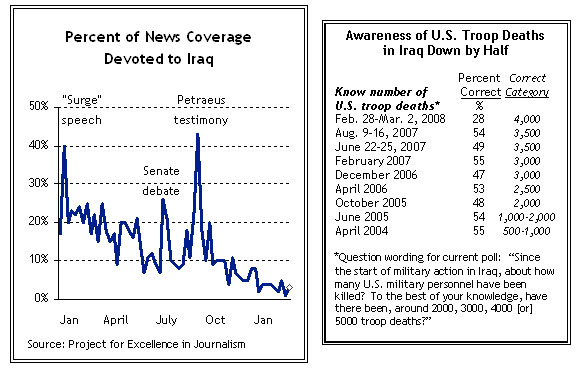 By contrast, 84% of Americans knew that Oprah Winfrey was supporting Sen. Barack Obama for President.

The study also finds that over the same period of time, the media coverage dropped to only 3% of news:

The drop in awareness comes as press attention to the war has waned. According to the News Content Index conducted by the Project for Excellence in Journalism, the percentage of news stories devoted to the war has sharply declined since last year, dropping from an average of 15% of the newshole in July to just 3% in February.

Will Thomas
Contributor
Suggest a correction