There are remarkably few positive things to say about Iraq today. The country seems to be in perpetual upheaval since the U.S. invasion in 2003. Dozens of people were killed across Iraq just days ahead of the start of the holy month of Ramadan, and more will probably lose their lives in the coming few days when insurgents typically step up their attacks. Yet the Obama administration has recently announced that the U.S. is "on target to end the combat mission." The U.S. government plans to withdraw its combat troops by the end of August and to remove all troops by the end of 2011.

But Iraq's most senior military officer, Lieutenant General Babaker Zebari, said that his forces, particularly the air force, were not ready to take over, cautioning that his security forces will not be able to secure the country until 2020. 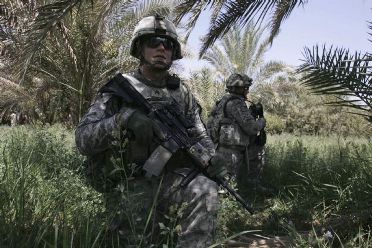 The country has been facing many domestic challenges, such as a period of Sunni Arab insurgency, bloody attacks by al-Qaeda, confrontations with al-Sadr militias, and the ongoing tensions between various political factions; however, it's Iraq's vulnerability to neighboring countries that Zebari was alluding to.

"If America withdraws its forces and one of the neighboring countries causes problems, then we're going to have a problem," Zebari said.

Meanwhile, in an interview with the British newspaper The Guardian last week, Saddam Hussein's former deputy Tareq Aziz warned about a U.S. withdrawal and accused Barack Obama of "leaving Iraq to the wolves". Indeed, and even with the presence of 64,000 US troops in Iraq, both Turkish and Iranian troops have recently crossed Iraq's northern border in pursuit of Kurdish rebels. Last December, Iranian troops occupied an Iraqi oil well in the south, triggering popular outrage but little action from the Iraqi government.

It's worth mentioning that not everyone agrees with Zebari. A couple of days before his cautioning statement, General Ali Ghaidan, the commander of all Iraqi ground forces, told reporters at a news conference that his troops are "100 per cent ready" to take over.

But will the U.S. actually withdraw from Iraq?

Not really. Tens of thousands of U.S. troops will remain in the country to train the Iraqi army and provide it with logistical support. If need be, they will be engaged in combat missions. Meanwhile, the number of private contractors working for the U.S. in Iraq in sectors such as security, communications, utilities, and commerce is estimated at 100,000. This number is likely to increase significantly once the "combat forces" are gone, especially in the security sector.

Meanwhile, the political stalemate between Nouri el- Maliki and Iyad Allawi if not resolved might soon trigger a major political upheaval, something that may cause the Iraqi government with its fragile coalitions to collapse; the last thing the Obama administration needs while withdrawing the troops.

It took 21 days for the U.S. armed forces to reach Baghdad and topple Saddam Hussein, but leaving Iraq is proving to be more complicated than invading it.