Just as effective democracy assumes and requires the consent of the governed, so does an effective analogy assume and require a common set of beliefs and experiences among its intended audience. This week, George W. Bush finally made the analogous connection he has so vehemently avoided between Iraq and Vietnam. But, as he has done with Biblical interpretation and the English language, the boy has badly mangled the meaning.

On August 22, Bush used his speech before the Veterans of Foreign Wars to yet again to "reframe" the Iraq debate. How long can you "reframe" something before you realize that the problem is your crappy art and not the choice of a speckled mahogany vs. fluted sterling silver enclosure? Answer: at least four years.

However, it was neither the well-understood Vietnam-as-quagmire nor the equally-applicable Vietnam-as-conflict-he-avoided that the president relied upon. No, Bush rested his latest justification on Vietnam-as-lost-because-we-didn't -stay-long-enough. Yeah, that was just the problem. Think about it. Had we stayed longer, we could have killed every last person in Vietnam and won the damn thing, but those perpetual back-stabbers in Washington again failed to support the troops.

Bush's strategery in this case, as with global warming, evolution and other facts, depends on creating doubt. He said things like:

1. "Now, I know some people doubt the universal appeal of liberty, or worry that the Middle East isn't ready for it."

2. "Others believe that America's presence is destabilizing, and that if the United States would just leave a place like Iraq those who kill our troops or target civilians would no longer threaten us."

3. "Here at home, some can argue our withdrawal from Vietnam carried no price to American credibility, but the terrorists see things differently."

4. "Three decades later, there is a legitimate debate about how we got into the Vietnam War and how we left."

No, there isn't. This is a complex literary device known as "bullshit," which is employed all too often by people who don't know what they're talking about. I, too, can invoke the tree hugging, ape-descending, freedom-hating "some" and "others" to create a "legitimate" debate where none legitimately exists. Watch me work my magic:

1. Some can argue that babies come from a magical stork that shoves the fetus into a woman's body moments before birth then teleports back to its home in the trash can where Oscar the Grouch lives. 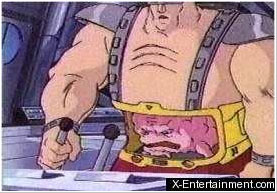 2. Others believe that babies are always inside of women, remote controlling them like that Teenage Mutant Ninja Turtles villain, Krang, the talking, fluid-dripping, pink brain that installed himself inside an ogre's abdomen in order to defeat our turtle heroes.

3. There is a legitimate debate about how a woman becomes pregnant.

For Bush to sell the Iraq war by using America's most shameful military expedition of the 20th century shows just how desperate he is. He's not just drinking the Kool-Aid, he's freebasing the powder.