What a bold young fellow he was! His colleagues could barely watch when he was at work. He lay down on his stomach lengthwise and crawled forward inch by inch. His hands carefully felt through the darkness of the night. Was there a trip wire anywhere that went straight through the area? Or was there a small warhead in the ground, buried by hand?

Hoshiyar Ali knew that he would get blown up if he touched something like this even a little too hard. He was searching out mines in the area. He was in his mid-twenties and had joined the peshmerga, the military forces of Iraqi Kurdistan, which was then a matter of honor. The peshmerga came down the mountains at night and attacked military bases where the Iraqi army was stationed. Since 1986, the Kurds have had this ace up their sleeves. Each time Hoshiyar dug, with his skilled hands, a six-foot-wide corridor for them, through which they then proceeded to start their attack.

"I pretty much taught myself everything," he says. "After a short time I already knew how the soldiers set out their mines and how big the distances were between the booby traps."

We are sitting in the living room of his house in Halabja, Iraq. In one corner, there is a whole collection of mines, and Hoshiyar, who was born in 1963, is talking about his crazy life. Like other Kurds I've met, he won't cease to amaze me. 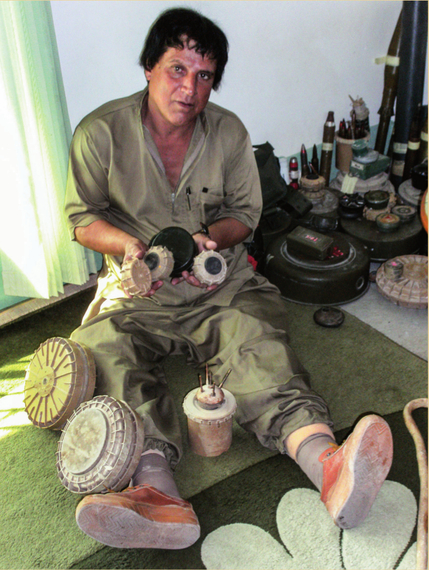 In 1991, when the United Nations established a safe zone for the Kurds, international aid organizations flooded northern Iraq. They started detecting and defusing millions of mines that had made a vast majority of the area uninhabitable.

When the area's population returned to the mountains to rebuild the villages that had been destroyed by Saddam Hussein, they were at risk of hitting mined areas when farming their land. They were at risk of seeing their cows and sheep torn up by explosions. Many villagers were unhappy with the speed of the work of the experts from abroad.

Then they remembered this devilish fellow from Halabja, the guy the Peshmerga had talked about so frequently. "Just call him," they would say. "He won't think twice. He will just do it."

"I gave everybody my phone number who asked for it," Hoshiyar reports today. "That's how over time I received more and more phone calls." His parents had fallen victim to the chemical attack in Halabja in 1988, when the Iraqi army dropped chemical bombs on peshmerga-occupied Halabja, killing thousands of Kurdish residents. So Hoshiyar Ali had nobody who would have seriously tried to stop him.

"I have seen so much death -- I just wanted to do something. And this has remained true until today," he said.

"How much do you charge per job?" I ask.

"Nothing, absolutely nothing," he responds. "I have never done this for money. For five years I was a peshmerga, retired from service at the rank of a major general, and the pension I receive now for this is enough. I don't want to make any money off the mines."

There were more than a few people who criticized him. They said he was doing a life-threatening job without any type of modern apparatus and without ever having completed any training. They said his way of working was that of an amateur, and that it was more a thirst for adventure than expert knowledge that motivated him. They said that by doing this he was tempting young people, who, like him, had no training, to do the same thing.

And indeed, two of his brothers who were helping him sweep mines were killed on the job. Once, he was prosecuted by the ministry of mining affairs in Sulaimaniya because he was supposedly poaching in their territory. But people went to the barricades for him, he says, and a number of lawyers stepped forward, offering to defend him pro bono, which was why the charges were ultimately dropped.

"Believe me," he says defiantly, "I have done more than all of those organizations put together. I have swept 540,000 hectares of land and dug up almost 2.4 million mines in the process. With my very own hands have I pulled out 160 people who had been hurt severely in minefields. But most of those organizations are corrupt and only waste money."

I am starting to have doubts about those huge numbers. But I can see with my own eyes that he has paid a high price for his passion. In 1989, in his third year in the peshmerga, his left leg was torn off in a nighttime sweep. No minesweeper in the entire world would have possibly felt like picking up his job again after the necessary amputation. Hoshiyar, however, headed out again, now on crutches, put said crutches down on location and crawled towards his new targets with only one leg.

Five years later, in 1994, he was struck for the second time. He had rested his remaining foot on a stone under which a mine had been buried. That's when his right leg was also mangled; his doctors had to remove more and more tissue from his stump several times. For those procedures he was taken to Iran and then even to Russia. That's how Hoshiyar from Halabja finally became a national hero -- a kind of living martyr.

"Peace Winds," a Japanese aid organization, invited him on a trip to the Far East. There he stayed for a total of seven years; the Japanese presented him on fundraising tours throughout the country and collected so much money that his family can receive an additional pension. Using the means from the donations, the Japanese bought him two computerized prosthetic legs with "intelligent knee joints," which coordinate and harmonize his motion sequences.

He doesn't exactly walk freely with those now, but haltingly, tipping back and forth. But you won't hear a single word of complaint come out of his mouth. He laughs as if all of this is fun for him, and his conversation spills over with stories.

"Wouldn't it have been a good time to stop after losing both legs?" I ask him.

Only one-third of the area along the Iranian border, the area of Halabja and Sulaimaniya, has been cleared so far. In the Iraqi Kurdistan Region alone, 3,512 minefields have been registered, covering over 300 square miles, according to the United Nations Development Programme. The Ottawa Treaty, which was signed by Iraq, dictates that the entire country is to be freed of mines by 2018. "I really still have a whole lot of work ahead of me."

And so he still wobbles into the fields with his prosthetic legs, unstraps his two artificial legs, puts them down in the grass -- and begins, crawling along using his torso, to look for mines. The Kurds still have a hero -- just one without legs. Mosques have been named after him, schools and hospitals and entire villages carry his name. 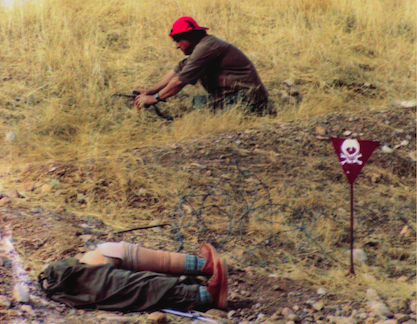 "Come with me, I will show you my new museum," Hoshiyar says, filled with enthusiasm. "It's not quite finished yet, but at least the walls are up already." Together we get into the car; we go from Halabja about three miles towards the border to a hill. Remnants of poison gas bombs, along with the ubiquitous mines, lie strewn around there.

"I want to exhibit all weapons that have been used against the Kurds here," he announces. "And all the mines I have defused are to be stored here one day. Currently, they are still buried in a deserted mountain region; a small part is sitting in my house."

I am shuffling along the bare brickwork, which doesn't yet reveal what this place is supposed to look like one day.

"Don't worry, I'll take care of that, too," Hoshiyar explains. "I'm doing this for future generations. They won't even believe what was going on in Kurdistan one day -- at least not until they can see it with their own eyes."

It's a nice view into the country from up here. Hoshiyar claims that he knows each and every spot and I respond that I am not surprised to hear that.

"I'm probably also the only person alive to already have seven graves," he says, enjoying my careful attention.

"Yes, my amputated body parts have been split up over seven areas. The people believe a relic of that kind brings them good luck. One piece lies in Iran, one in Japan, one in Russia. Four pieces are laid to rest on Kurdish soil; they are in Pinshar and Sulaimaniya, at the Bamo Mountain where I lost my first leg and here in my home town of Halabja. If you want to, we can go to the local gravesite."

Ten minutes later we're standing at the place. A small, inconspicuous rectangle, some raised soil and again a wide view of the valleys. Many people go on pilgrimages here throughout the year, because this is really Kurdish history in the flesh.

We are going back to Hoshiyar's house. There, his one-and-a-half-year-old son Beneat is sitting in the living room playing with all the hoarded mines -- among which there is also the mine that once ripped off one of his father's legs. Apparently he knows those things quite well already; he pulls and tugs at them constantly.

My interpreter's eyes become dilated with fear. He jumps up and drags me out of the room. "Dude, it's not safe anymore in here," he whispers to me. "Please, let's go!" Hoshiyar is smiling indulgently; apparently this is not the first time he's experienced a reaction like that.

In his front yard there is a sign with a skull and crossbones. He has marked off the land like a minefield that is to be swept. A Japanese flag is flying on his house's roof, supposedly bought for him by a Japanese journalist.

His car is adorned with a sticker which contains a slogan addressed directly at the mines: "For the sake of God and my country -- I'm ready to destroy you, no matter where you are."

"As long as I still have my hands, I will not stop this work," he says, "not even for a moment."
We shake hands goodbye. We walk out to the road and he hobbles after us on his crutches. "Freedom has its price," he calls after us while we're getting into our car. Once again his whole face lights up. And then he waves at us with his crutches.

This article is an excerpt from the book The Hour of the Kurds: How They Are Changing the Middle East. 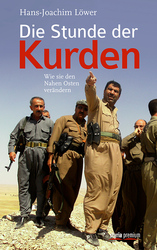