NAPLES, Italy, June 11 (Reuters) - The United States is considering building more U.S. military bases in Iraq to drive back Islamic State militants in a move that may require a further increase in American forces, the top U.S. general said on Thursday.

A day after the White House announced the deployment of 450 more U.S. troops to Iraq and a new training hub in Anbar province, Army General Martin Dempsey said the Pentagon was considering more sites in strategic areas such as the corridor from Baghdad to Tikrit and further north toward Mosul.

Dempsey, chairman of the Joint Chiefs of Staff, acknowledged these might require sending more U.S. troops, which already numbered about 3,100 in Iraq before Wednesday's announcement. His spokesman said American forces could also be moved from within Iraq to avoid troop increases.

"Our campaign is built upon establishing these 'lily pads,' if you will, that allow us to continue to encourage the Iraqi security forces forward," Dempsey told reporters before landing in Naples, Italy.

U.S. President Barack Obama has said the troops would not engage in combat in Iraq, where the Pentagon has relied heavily on an air campaign that U.S. officials say has killed thousands of Islamic State fighters and eroded their capability.

While the 3,100 U.S. forces in Iraq are a far cry from the peak of about 170,000 under President George W. Bush, the newly announced operations mark the first significant adjustment in Obama's Iraqi strategy in months and follow gains by Islamic State insurgents who control a third each of Iraq and Syria.

Asked about Dempsey's comments, White House deputy national security adviser Ben Rhodes told MSNBC, "if (Obama) gets a recommendation to have another facility like this, he'll take a hard look at it."

White House spokesman Josh Earnest told reporters there were "no immediate or specific plans" to add new bases in Iraq.

Dempsey also renewed the possibility of deploying U.S. spotters alongside Iraqi forces to call in air strikes during a future offensive, but added, "we're just not there yet."

The possible future training sites, such as the hub at the Taqaddum military base about 15 miles (25 km) from Ramadi, were "just part of prudent planning," he said.

Dempsey did not see another such site in Anbar province soon. "But I could conceive of one potentially somewhere in the corridor that runs from Baghdad to Tikrit to Kirkuk and over into Mosul. So we're looking at that area," Dempsey said.

Dempsey said it would take several weeks to establish the new hub announced on Wednesday at Taqaddum near Ramadi, which fell to Islamic State militants last month.

Taqaddum will require new American defenses to detect and guard against incoming rockets and mortars.

One benefit of Taqaddum, Dempsey said, is it would help draw in tribes that felt unsafe traveling to the other U.S. outpost in Sunni-dominated Anbar province, at the Ain al-Asad air base.

"Using Taqaddum gives us access to more of the tribes that are willing to stand against ISIL," Dempsey said, using an acronym for Islamic State.

Dempsey, who has long warned about the limits of U.S. military power in Iraq, said he expected Sunni tribes would represent a "holding force" to control territory seized in Anbar and would protect the flanks of the Iraqi security forces as they advance.

He expressed confidence that the latest deployments to Taqaddum would help advance Iraq's military campaign against Islamic State, but that the real test was whether Iraq's government could mend a sectarian rift between Sunni and Shi'ite Muslims.

"The game changers are going to have to come from the Iraqi government themselves," he said. (Additional reporting by Doina Chiacu, Susan Heavey and Roberta Rampton in Washington; Editing by Jason Szep and Tom Brown) 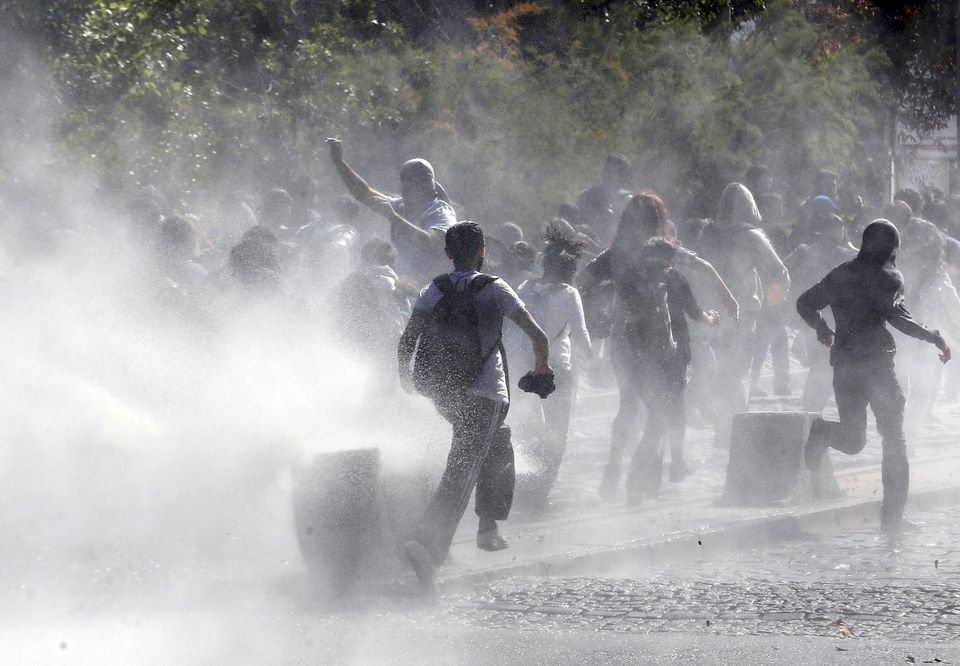 1 / 21
Demonstrators run a water cannon as they clash with riot police outside of the Middle Eastern Technical University (METU) in Ankara on October 9, 2014.
ADEM ALTAN via Getty Images